As part of the ‘Battle-Scarred’ Summer School held at Merton College in July 2022, the Civil War Petitions team issued a challenge to the students on the course to write a blog post which reflected upon the petitions. One student who accepted that challenge was Sarah Cooley and we are delighted to publish her blog this week. Continuing the themes raised in the last blog by Maureen Harris, Sarah examines the effects of the Civil Wars on civilian communities at a local level…

Petitioning for compensation during and after the British civil wars was not just the preserve of those, or the family of those, who fought in the field engagements like Edgehill or Naseby, or people who served as engineers, surgeons, and drivers (see David Appleby’s blog – ‘They also served’); Petitions also came from civilians who were impacted when the conflict crashed into their communities:  People like William Summer of Leicester whose house and orchard were destroyed ‘before ye taking of the towne, for ye better securing thereof’ and then whose goods were plundered when the town was sacked.  His livelihood and property were destroyed, and his family were traumatised.  This blog explores what the petitions can tell us about local communities during the civil wars.  They shed light on some of the reasons why men joined the army, the attitudes of local officials to the conflict, and the financial losses families incurred. 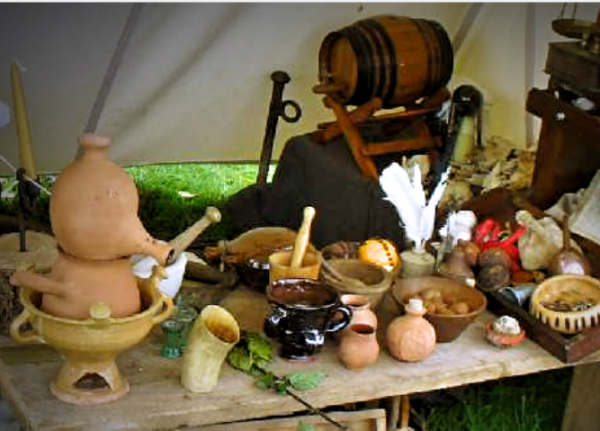 A lack in basic necessities forced many men to leave their families and join the armies in the Civil Wars (photo credit: Sarah Cooley)

Due to the wording of the legislation that governed who was eligible for compensation, explicit professions of loyalty particularly to the Royalist cause are very noticeable.  For example, Mary Ewin of Melling Lancashire who petitioned after her husband abandoned their family, professed that they had been ‘true and loyall subiects to his Ma[jes]tie and for their loyaltie and faith theirin were brought into povertie in these late and vnhappy distractions…’.  However, a theme that runs through the petitions is that men, like Thomas Stockton (Aliis Stockon) and Thomas Fisher, enlisted through necessity. – ‘pouertie enforcing’ the former and the latter having no option but ‘through extreame hung[e]r… to leaue her w[i]the 2 poore smale children and betake him to a sould[ie]rs life…’.  Both would likely have done so in the hope of regular pay as well as a pension for their wives and children should they be killed in service.  Furthermore, emphasising their poverty supported their argument that they were worthy of help while signalling that they had been let down by the very system designed to support them.

While some chose military service as an alternative to destitution, others had it thrust upon them due to the practice of local conscription – a recruitment tool used by both sides during the wars and implemented by the parish constables.  Some like Richard Dobson were caught up in the process; his wife Jane petitioned for relief because he had been ‘by Accident was in the Towne of Aughton about his affaires…’ and ‘was by the Constable & officers of the said Towne of Aughton pressed for a Souldier & soe taken to the sea…’ Jane presented Richard as having been in the wrong place at the wrong time.  There were also those whose conscription appeared to be more targeted as the cases of Edmund Rowse of Methwold, Norfolk, and John Tomptson of Tunstall, Lancashire suggest. It is not known why these men were chosen, however, Rowse had been recently acquitted of horse stealing and Tomptson was a traveling rope maker so pressing them into military service it can be argued helped fill the local constables’ quotas and removed two potential troublemakers from the community.

Local officials were also responsible for bringing petitions either on behalf of or against their parishioners.  The churchwardens of Tunstall petitioned against John Tomptson’s wife mentioned above ‘because She and hir Childeren is now able to maintaine themselfes and She for hir part is grone to be a very drunken Realinge woman.’  Their counterparts in Bolton however, petitioned on behalf of Marie Houlte whose son had been killed so that ‘shee maie bee releeued amongst the rest of the widdowes and haue allowance towards her Liuelyhood nowe haueinge noe other Meanes to subsist withall.’  Not that this was an altruistic act; for a financial settlement from the county committee removed the person concerned from reliance on the parish poor rate.

The petitioning process also illuminated community and family disagreements and the petitions of Jenet Pearson highlight the familial split of allegiances which sometimes occurred.  She applied for assistance because her husband, was imprisoned by Parliamentarian forces and she had been evicted by her Royalist sympathising stepson from ‘the said Tenemente which should haue Maintained me and fiue small Children but also all my goodes till it came to my beds where my said Children did lye on & conerted [sic.] them to his owne vse…’.

Pearson’s petitions, the first dated 1650 with a subsequent one submitted in 1653, illustrate the agency and persistence of petitioners in achieving their aims.  The first-person language and non-standard formulae of the earlier appeal indicate that this was Pearson’s ‘voice’ though possibly through dictation to a literate friend.  However, by her second petition of 1653, Jenet had come to realise that she was entitled to financial help from the army and had been ‘deprived thereof by some indirect meanes of the paymaster’ and that due to her children’s poor health she was entitled to an uplift in her financial assistance ‘to receaue such allowance as is granted to others of the like condic[i]on…’  This implies that she had taken professional advice, a theory corroborated by the third person language and standard formula of the petition.

The role of local community networks and the advocacy of neighbours is also apparent in the petitions through the role of the endorsers, those who countersigned petitions.  In some instances, such as the petition in 1657 of Jane Cooke of Garthiffe, Cheshire, and who requested to remain as a pensioner, the endorsers supported the claim. However, the motivations of the supporters are more difficult to determine.  Did it come from family and friends who wished to see the petitioner gain all the help to which they were entitled or was it from parish officials mindful of the potential extra burden on the parish poor rate should no pension be given. 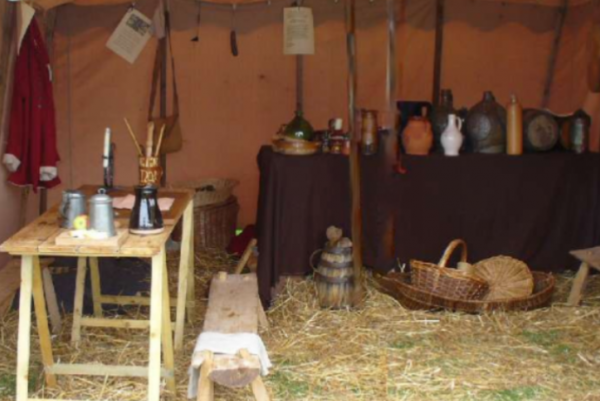 A recreation of the interior of a tavern at the time of the Civil Wars (photo credit: Sarah Cooley)

In other cases, for example that of Nathaniel Maund of Tenbury, Worcestershire, support from the community was not forthcoming.  Maund had been granted assistance of 1s 4d a week, which the county justices had ordered his parish to provide, but in 1680 he was the subject of a counterclaim by the ‘Minister & Church-wardens, with severall others ye Inhabitants of ye said Town’, who argued that Maund was not deserving of the money as he used it to buy drink and was ‘a common drunkard; a Railer, & will abuse any of ye Town or parish with most base & opprobrious language.’ 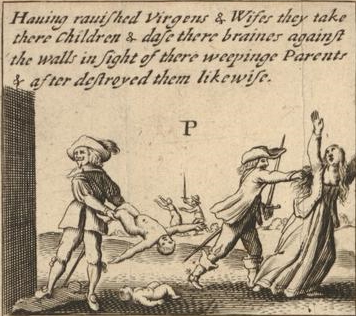 From ‘The Teares of Ireland’ (© The Trustees of the British Museum, reproduced under a CC BY-NC-SA 4.0 licence).

Like the petition of William Summer above, some of the documents record the abuses suffered by civilians when military activities landed on their doorsteps.  The work done by Dr Maureen Harris and her team on the Warwickshire Loss Accounts identifies a large number of potential claimants of material losses as a result of Parliamentarian activity from 1642-1646 but this is not reflected within the petitioning process of the county pensions scheme.  The petitions which do survive show the direct impacts the fighting had on communities.  For some, like Margaret Pratchet of Nantwich, recompense for these impacts was the reason for petitioning.  In 1655 she was still owed arrears of £22 9s 6d for quartering maimed soldiers.  For others, the loss of personalty was referenced in their petitions to add weight to a claim for support.  Matthew Bakewell of Uttoxeter ‘was spoiled of all that he had’ when Queen Henrietta Maria’s army under Colonel Tyldesley captured and plundered the town of Burton in 1643.  This loss of goods, however, was not the reason for his petition; old age and ill health curtailed his ability to earn a living to support his orphaned grandchildren.  Abuse in the form of physical assault was also recorded by Anne Boyde, widow of Lieutenant William Boyde of the Gloucester garrison as she stated she was stripped naked and robbed by her royalist captors.  Anne’s accusation raises wider questions about the treatment of prisoners and at the time would also have fed into the Parliamentarian narratives around the behaviour of the English Royalists by comparing their actions to those with which the Irish were accused against Protestant settlers in 1641.

The above examples demonstrate how the civil war petitions can be used to explore the relationships within communities and between communities and local authorities.  They can be used to identify why people took up arms and how the local administration could potentially use conscription to their advantage.  In addition, they also help with understanding how non-combatants were affected on a physical and emotional level and the extent to which individuals had the agency to seek redress.  Furthermore, the petitions illustrate the community networks and the economy of makeshifts which people used to help them “get by” and how the support or lack of support from the same community, together with the narrative of the deserving or undeserving poor could enhance or diminish a petitioner’s case.

Sarah Cooley worked as an archivist and then in volunteer management for many years, before returning to study in 2019 to read for an MA History (Local History) at the University of Leicester. In 2022, she commenced study for a DPhil in English Local History through the Department of Continuing Education at the University of Oxford.  Her research interests concern the relationships between the British Civil War garrisons in Warwickshire and Staffordshire, and their local communities.