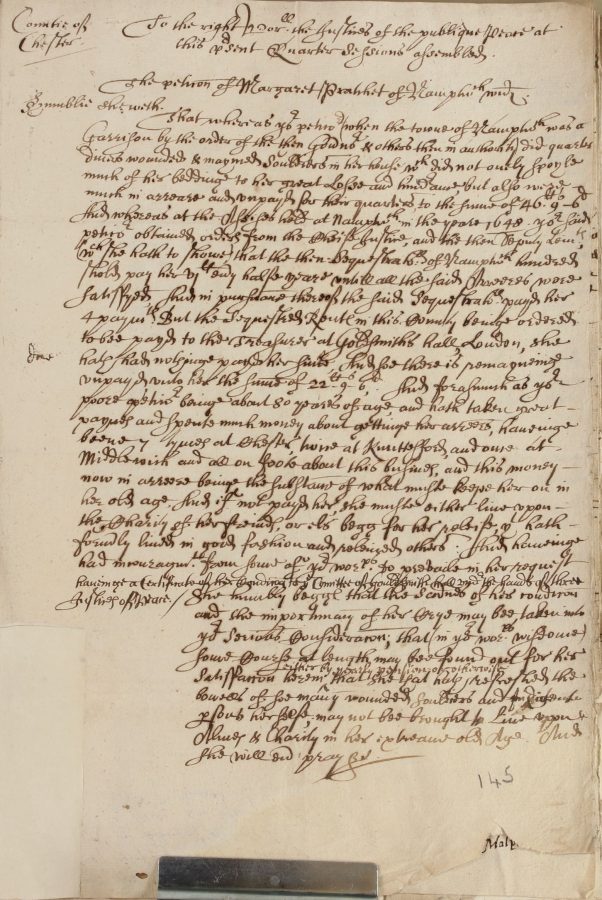 To the right Wor[shipfu]ll the Justices of the publique Peace at this pr[e]sent Quarter Sessions assembled.

That whereas yo[u]r peit[i]o[ne]r (when the towne of Namptw[i]ch was a Garrison by the order of the then Gou[ver]nor & others then in authority) did quarter diuers wounded & maymed Souldiers in her house w[hi]ch did not onely spoyle much of her beddinge to her great Losse and hind[e]rance, but also were much in arreare and vnpayd for their quarters to the summe of 46 li 9 s. 6 d. And whereas at the Assises held at Namptw[i]ch in the yeare 1648 yo[u]r said petic[i]o[ne]r obtained orders from the Cheife Justice, and the then deputy Leiu[tenan]ts, (w[hi]ch she hath to showe) that the then Sequestrators of Namptw[i]ch hundred shold, pay her vi li. eu[er]y halfe yeare vntill all the said Arreeres were satisfyed, And in pursuance thereof the said Sequestrators payd her 4 paym[en]ts: But the Sequestred Rents in this County beinge ordered to bee payd to the Treasurer at Goldsmiths hall, London, she hath had nothinge payd her suite, And soe there is remayneinge vnpayd vnto her the sume of 22 li. 9 s. 6d., And forasmuch as yo[u]r poore petic[i]o[ne]r beinge about 80 yeares of age, and hath taken great paynes and spente much money about gettinge her arreers, haueinge beene 7 tymes at Chester, twice at Knuttesford, and once at Middlewich and all on foote about this busines, and this money now in arreere beinge the substance of what muste keepe her on in her old age, And if not payd her, she must either liue vpon the Charity of her freinds, or els begg for her releige, yt hath form[er]ly liued in good fashion releiued others: And haueinge had incouragm[en]te from some of yo[u]r wor[shi]ps to prevaile in her request haueine a Certificate of her Condic[i]on to ye Comittee of Gouldsmith Hall vnd[e]r the hands of three Justices of Peace.

She humbly beggs that the sadnes of her condic[i]on and the importunacy of her Crye may bee taken into yo[u]r serious Considerac[i]on; that (in yo[u]r wor[shi]ps wisdome) some Course at length may bee found out for her satisfacc[i]on herein either by yearely pension or otherwise that she that hath refreshed the bowells of soe many wounded souldiers and Indigente p[er]sons herselfe; may not bee brought to Liue vpon Almes & Charity in her extreame old Age. And she will eu[er] pray &c

To the Right Worshipful the Justices of the public Peace at this present Quarter Sessions assembled.

The petition of Margaret Pratchet of Nantwich, widow.

That whereas your petitioner (when the town of Nantwich was a garrison by the order of the then Governor and others then in authority) did quarter divers wounded and maimed soldiers in her house, who did not only spoil much of her bedding to her great loss and hindrance, but also were much in arrears and unpaid for their quarters to the sum of £46 9 s. 6 d. And whereas at the Assizes held at Nantwich in the year 1648, your said petitioner obtained orders from the Chief Justice and the then Deputy Lieutenants (which she has to show) that the then Sequestrators of Nantwich hundred should pay her £6 every half-year until all the said arrears were satisfied. And in pursuance thereof, the said Sequestrators paid her 4 payments. But the sequestered rents in this county being ordered to be paid to the Treasurer at Goldsmiths Hall, London, she has had nothing paid her suit and so there is remaining unpaid unto her the sum of £22 9 s. 6 d. And forasmuch as your poor petitioner is about 80 years of age and has taken great pains and spent much money about getting her arrears, having been 7 times at Chester, twice at Knutsford, and once at Middlewich, and all on foot about this business, and this money now in arrears being the substance of what must keep her on in her old age. And if it is not paid to her, she must either live upon the charity of her friends or else beg for her relief, she who has formerly lived in good fashion and relieved others. And having had encouragement from some of your Worships to prevail in her request, having a certificate of her condition to the Committee of Goldsmith Hall under the hands of three Justices of the Peace,

she humbly begs that the sadness of her condition and the importunacy of her cry may be taken into your serious consideration; that (in your Worships’ wisdom) some course at length may be found out for her satisfaction herein, either by yearly pension or otherwise, that she that has refreshed the bowels of so many wounded soldiers and indigent persons herself may not be brought to live upon alms and charity in her extreme old age. And she will ever pray etc.