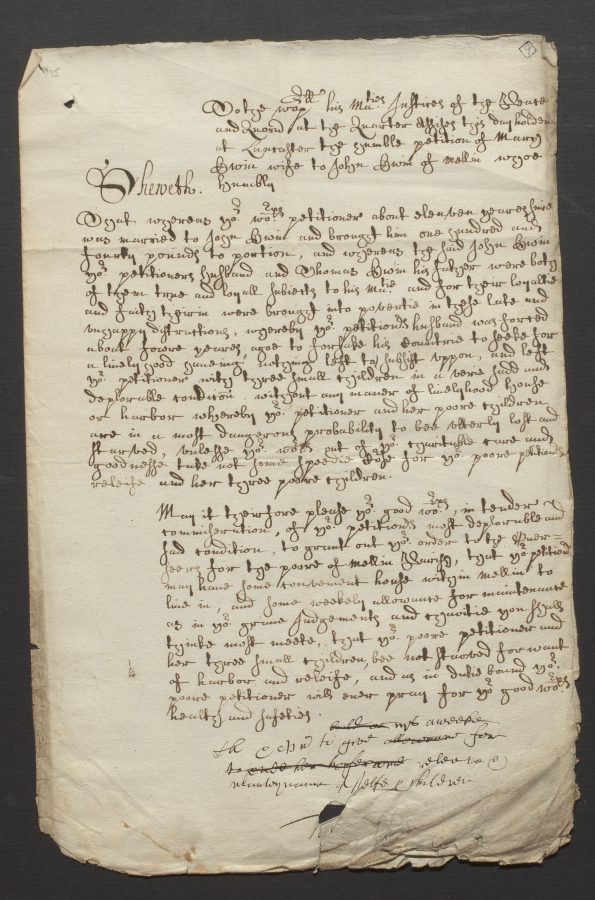 That whereas yo[u]r wor[shi]ps petitioner about eleaven yeares since was married to John Ewin and brought him one hundred and fourty pounds to portion, and whereas the said John Ewin yo[u]r petitioners husband and Thomas Ewin his father were both of them true and loyall subiects to his Ma[jes]tie and for their loyaltie and faith theirin were brought into povertie in these late and vnhappy distractions, whereby yo[u]r petition[e]rs husband was forced about fowre yeares agoe to forsake his Countrie to seeke for a liuelyhood haueing nothing left to subsist vppon, and left yo[u]r petitioner with three small children in a verie sadd and deplorable condic[i]on without any maner of liuelyhood house or harbor whereby yo[u]r petitioner and her poore children are in a most dangerous probability to bee vtterly lost and starved vnlesse yo[u]r wor[shi]ps out of yo[u]r charitable care and goodnesse take not some speedie Co[u]rse for yo[u]r poore petition[er]s releife and her three poore children.

May it theirfore please yo[u]r good wor[shi]ps, in tender commiseration of yo[u]r petition[e]rs most deplorable and sad condition, to grant out yo[u]r order to the Ouerseers for the poore of Mellin Parish, that yo[u]r petition[er] may haue some convenient house within Mellin to liue in, and some weekely allowance for maintenance as in yo[u]r graue Judgements and charitie you shall thinke most meete, that yo[u]r poore petitioner and her three small children bee not starved for want of harbor and releife, and as in dutie bound yo[u]r poore petitioner will euer pray for yo[u]r good wor[shi]ps health and safeties.

To the Worshipful his Majesty’s Justices of the Peace and quorum at the Quarter Assizes this day held at Lancaster. The humble petition of Mary Ewin, wife to John Ewin of Melling, who humbly

That whereas your Worship’s petitioner about eleven years since was married to John Ewin and brought him one hundred and forty pounds to portion. And whereas the said John Ewin (your petitioner’s husband) and Thomas Ewin his father were both of them true and loyal subjects to his Majesty. And for their loyalty and faith therein, were brought into poverty in these late and unhappy distractions. Whereby, your petitioner’s husband was forced about four years ago to forsake his country to seek for a livelihood, having nothing left to subsist upon, and left your petitioner with three small children in a very sad and deplorable condition, without any manner of livelihood, house or harbour. Whereby, your petitioner and her poor children are in a most dangerous probability to be utterly lost and starved, unless your Worships out of your charitable care and goodness take not some speedy course for your poor petitioner’s relief and her three poor children.

May it therefore please your good Worships, in tender commiseration of your petitioner’s most deplorable and sad condition, to grant out your order to the Overseers for the Poor of Melling parish that your petitioner may have some convenient house within Melling to live in and some weekly allowance for maintenance, as in your grave judgements and charity you shall think most mete, that your poor petitioner and her three small children be not starved for want of harbour and relief. And, as in duty, bound your poor petitioner will ever pray for your good Worships’ health and safety.

Churchwardens and Overseers to give] allowance build or 3 s. a week for to provide her houseroom relief and maintenance of herself and children.