From 10 to 15 July 2022, the Civil War Petitions team ran a residential summer school at Oxford’s historic Merton College, once home of the royal court of Queen Henrietta Maria. The team were joined by a number of guest experts and together, they introduced members of the public to some of the most recent scholarship on the consequences and legacies of the British Civil Wars. Combining lectures, lively Q&A sessions, practical workshops, a battlefield tour and a guided visit to the National Civil War Centre, the programme aimed to showcase some of the results of the Civil War Petitions project. In this week’s blog, Denise Greany, a student on the summer school, reports on her experiences of the summer school… 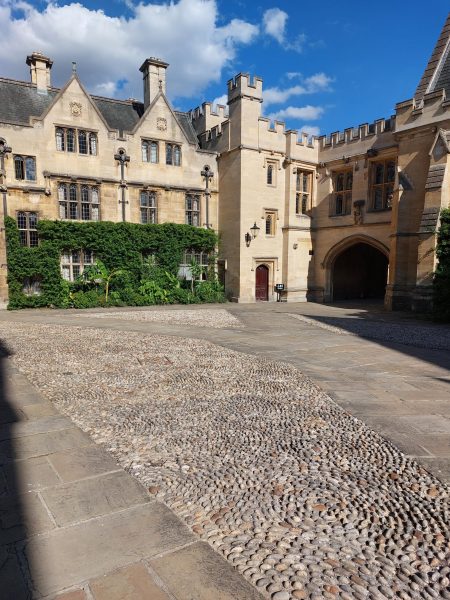 The dreaming spires of Merton College, Oxford, on a summer’s afternoon may seem like an incongruous setting for a summer school focused on the often harrowing tales of the men and women petitioning successive governments for aid after the British Civil Wars. No amount of sunshine and wandering through peaceful gardens can soften a sense of the pains described, for instance, by Johane Illery, whose family was threatened and possessions plundered after her husband was executed after the fall of Hemiock Castle, or Edward Bagshaw whose life surgeons saved by removing nine bones from his head wound and who afterwards ate and drank through a hole in the side of his face.

But Oxford was not just a beautiful setting for this summer school attended by a group from a wide range of professions and hailing from all over Great Britain and the United States. As the royalist capital during the civil war, it played a central role in events and our studies were lifted from the page and onto its streets. We followed a guide who helped us to reimagine a busy shopping centre as the location of Queen Henrietta Maria’s flower-strewn reunion with Charles I on her return from Europe with soldiers and equipment purchased by selling the crown jewels. 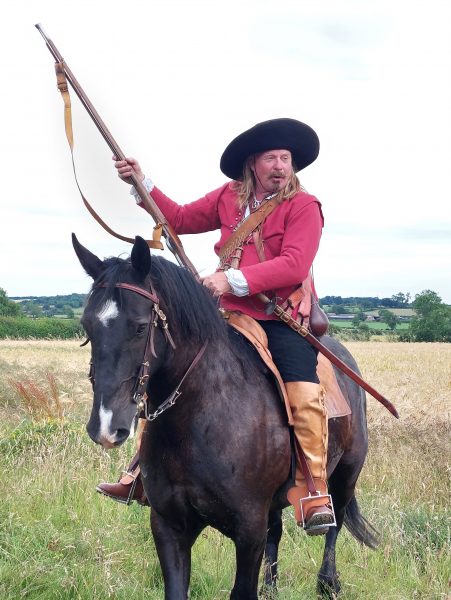 From the King’s headquarters at Oxford we travelled to the battlefield of his last stand. We walked the fields at Naseby, following the movements of his dashing cavalry commander Prince Rupert of the Rhine and were treated to a surprise meeting with one of Colonel Okey’s dragoons, whose hedge-hidden firepower helped Parliament’s New Model Army to victory.

The power of storytelling emerged clearly throughout the week. Dr Hannah Worthen and Dr Stewart Beale showed us how skilfully both humble and elite widows fashioned themselves as pitiful and deserving cases whilst simultaneously reminding the court of its obligation to recompense such sacrifice. In small group workshops we noticed how selectively petitioners recalled their civil-war experiences long after the fighting had ended. In 1683, John Walpole of Skillington asked for help in his old age, but, as his keen-eyed neighbours stressed, his story left out his ‘king-catching’ antics in the service of Cromwell or, as they now called him, ‘Old Noll’.

Printed stories were also powerful weapons for both sides. Prof Mark Stoyle described how the popular press, and its widely-read accounts of dangerous, knife-wielding, irish women and witches flying into battle above the King’s armies, was a contributing factor in the horrifying maiming of female camp-followers after the battle of Naseby.

Dr Ismini Pells introduced us to a hero of Parliament’s New Model Army, Philip Skippon, whose remarkable recovery from grievous bullet wounds evidences effective surgical practice, grounded in a body of evidence-based medical knowledge that was described further in fascinating detail by Prof Stephen Rutherford. The group had the opportunity to look closely at the weapons used to inflict these injuries in an inspiring visit to The National Civil War Centre in Newark.

In compelling detail, this course used civil war petitions to conjure seventeenth-century legal and medical practices, as well as battles and sieges, through the voices of ordinary men and women so often missing from history.