The Civil War Petitions project team frequently agonises over whether to include or reject individuals (or their relations) who were involved in the conflict but not technically soldiers. This is rather redolent of the conundrum faced by Winston Churchill’s government in 1944, when deciding whether or not civilians and home-based service personnel should be awarded the 1939-43 Campaign Star (later designated the 1939-45 Star). David Appleby shows in this blog that soldiers were certainly not the only ones killed or wounded during the Wars in the Three Kingdoms. Most of the individuals named below have not made it into our database for one reason or another, but they are at least commemorated in this blog.

As Eduard Wagner wrote in European Weapons and Warfare, ‘provisions, ammunition and other military supplies were indispensable to any army’. A large army could have as many as 200 supply wagons, stretching for several miles along the road. Care had to be taken in seeking out the best routes for the wagon train, and protecting it from the enemy. It was vital to have a competent wagon-master-general, as well as drivers, smiths, carpenters and wheelwrights. Wagner gives the impression that drivers were hired during the European wars, but documents unearthed by our project team show that waggoneers were very often conscripted, and their wagons and teams summarily requisitioned.

John Griffythes was impressed in Pattingham, Staffordshire, to serve as a driver during the Bishops’ Wars. Sometime during the campaign, he was kicked by a cavalry trooper’s horse, and had to be invalided home. Surgeons pronounced Griffythes’ shattered leg to be incurable, and being unfit for work he became dependent on parish charity. Pattingham’s leading parishioners helped him petition the county Justices in April 1642. The parishioners optimistically claimed that he was a maimed soldier, despite the fact that he was clearly a non-combatant. The Justices generously agreed to treat him as such, ordering an immediate gratuity of £5, and a county pension as soon as there was a vacancy in the pensioner list. Pattingham submitted a further petition to the Epiphany Sessions in January 1643, complaining that Griffythes had not yet received his promised gratuity, much less a pension. The Bench agreed that the ‘the poor man’ should be paid his arrears, plus an extra £3 for the year to come. However, a year later Griffythes petitioned to complain that he had still not received any money. This time the Justices pleaded poverty: Staffordshire’s economy was now being ravaged by the First Civil War, and the county’s Treasurers for Maimed Soldiers had ‘no more moneys in their receipts than to pay the pensions that are already being paid.’ There is no evidence that Griffythes was ever paid. [Staffordshire Record Office, Q/SR/250, fol. 11; /254, fols. 19r, 19v, 20r-23, 21; Q/SO/5, fols. 95, 117, 146, 147.]

Whereas John Griffythes was variously described as a servant and a tenant farmer, George Rolfe of Leyton, Essex (who featured in an earlier blog) ran a business as a carrier. In 1643, Rolfe’s wagon and horses were requisitioned for the Earl of Essex’s supply train, as the parliamentarian general made preparations to relieve Gloucester. Rolfe’s team was used to carry ammunition, with all the dangers that entailed. The fact that the wagon was broken and the horses killed at the first battle of Newbury suggests that they were lost in an explosion [Essex Record Office, Q/SO1, fols. 163, 168].

An engineer’s job similarly included handling hazardous materials. During many civil-war sieges they were called upon to construct explosive devices such as ‘pagans’ and ‘petards’, placing the latter against the walls and gates of enemy strongholds. On the other side of those walls, engineers had designed formidable fortifications, even for small garrisons, incorporating all the deadly innovations of the early modern Military Revolution. Experienced military engineers were therefore worth their weight in gold, both in an offensive and defensive capacity. John Hooper, Colonel Hutchinson’s chief engineer at Nottingham (who appears in our database as a signatory to several payments to Nottinghamshire war widows), was described by Lucy Hutchinson as ‘an ingenious fellow’. 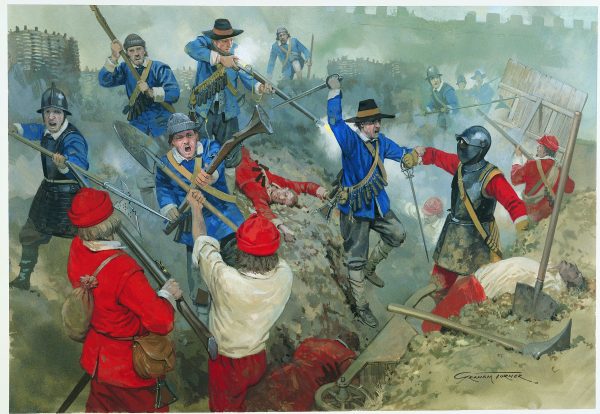 An artist’s impression of engineers and pioneers at work during the siege of Gloucester, 1643 (artwork by Graham Turner from ‘Newbury 1643’, copyright Osprey Publishing, part of Bloomsbury).

The case of Leonard Crast shows that engineers ran the same risks as regular soldiers during sieges. In April 1645 Crast petitioned the Hertfordshire parliamentary county committee for money to fund his return to London, on the grounds that he been wounded in the head in Parliament’s service [TNA SP28/232, fol. 720]. Sir John Gell and the Derbyshire parliamentary county committee certainly considered that their engineer, Edward Lions, should be treated like a soldier, as in August 1645 they agreed to pay him thereafter as if he were ‘a gentleman of the pike’ [TNA SP28/226, fols. 195, 217]. Lions had almost certainly supervised Gell’s assault pioneers as they dug trenches and mines under the foundations of Wingfield Manor during the parliamentarian siege of the place in August 1644. In the course of these excavations at least one of the conscripted pioneers – Anthony Hoades of Wirksworth – was ‘unhappily shot to death’ by the royalist defenders. However, it would be another three years before the Derbyshire committee awarded his widow a gratuity of £2, pending consideration of her claim for a war widow’s pension [TNA SP28/226, fols. 244, 500]. 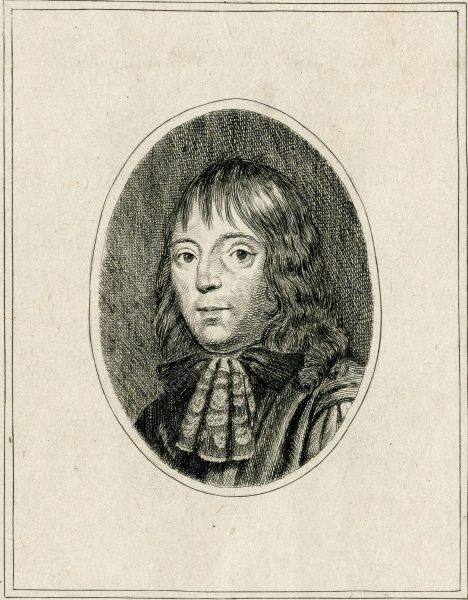 Jan Rosworme, the self-styled ‘Faithful Stranger’, was an engineer of German or Dutch origin. In 1651, the Rump Parliament made him Engineer General of all forts in England. Read more about his story here. (Image from the Fairclough Portrait Collection, copyright University of Leicester, reproduced under a CC BY-NC licence).

The petition of Henry Colier of Allestree, Derbyshire, shows that even duties behind the lines entailed a certain amount of hazard. Colier was a saltpetreman, who collected and processed the saltpetre in order to help supply the parliamentarian garrison of Stafford with gunpowder. Years later, in 1652, Colier claimed that the ‘great and hot labour’ involved in the process had caused his foot to become so badly infected that he had lost his leg, leaving him unable to provide for his wife and three children.

The Civil War Petitions database contains details of many surgeons and physicians who worked to cure maimed soldiers during the conflict. The rules of war considered the persons of medical practitioners to be inviolate, as they habitually treated the wounded of both sides regardless of their own affiliation. We do not as yet have any conclusive evidence that any were wounded in combat, although it is noteworthy that William Edwards of Wrexham submitted a certificate to accompany his petition, just as a maimed soldier would. Pensions were certainly awarded to surgeons such as Peter Wray from Lewes, who had served in a parliamentarian regiment; and, after the Restoration, to John Corden of Herefordshire, who had served in a royalist one.

Apart from the full-time nurses employed in Parliament’s military hospitals in London, many other women volunteered (or were coerced) to nurse sick and wounded soldiers. Very often these were poor widowed women, as parish officials always preferred to find paupers employment rather than pay poor relief. One widow who appears several times in the database is Rose Oldershaw of Nottingham, who over two years nursed Timothy Holt back to health. The cost of looking after wounded men involved significant time and money, as Ann Nixon intimated in a petition to the Nottinghamshire committee in 1646. If the patient was sick rather than wounded, infection was an obvious risk, as deadly diseases were prevalent in all armies. The smallpox epidemic which ravaged the New Model over the winter of 1645/6 is reflected in numerous documents submitted to county officials in Cambridgeshire and Hertfordshire. An entry for Thomas Lucy of Datchworth, Hertfordshire, not only shows that the smallpox was brought into civilians’ houses, but also that it was often lethal [TNA SP28/232, fol. 714]. Smallpox afflicted the New Model again in 1651, as units passed through Essex, leaving sick soldiers in the care of the local community [Essex Record Office, Q/SBa2/78].

Given the prevalence of death in both military and civilian communities at this time, clergymen had a vital role to play. Those who served as regimental chaplains experienced all the privations of soldiering, and many were unable to last for even one campaign. William Dolman, chaplain to Colonel Alexander Popham, features in the Civil War Petitions database, and hopefully more will be found. Unlike surgeons, clergymen were often in considerable danger from those enraged by their religious views: Dr Michael Hudson, a notorious royalist cleric, met a grisly end, as did Hugh Peter, the equally notorious parliamentarian army chaplain. Some clergymen took an active part in the fighting, such as Samuel Kem, who served as a parliamentarian officer, and preached with pistols in the pulpit. Laurence Palmer, the rector of Gedling in Nottinghamshire, not only raised a troop of horse for Parliament but led it into battle. Even clergymen who did not carry swords could still die on them: Richard Benskin, rector of Wanlip, was killed by parliamentarian troops during the storming of Shelford in 1645. Catholic priests were killed during (or more likely after) the taking of Drogheda and Wexford.

Clergymen were often engaged in espionage work, a shadowy and largely thankless occupation. Then as now, spies were often tortured and executed if caught, and they were rarely acclaimed by their own side even if successful. Stewart Beale’s blog on Katherine de Luke has already told the story of a rare petition from a civil-war spy. More normally, we are left with curt notes of summary executions, and little more. Occasionally, however, a petition will lift the veil of anonymity. William Bramley and his five siblings were orphaned when their father was executed by royalists at Wingfield Manor, presumably either before or during the siege of 1645 [TNA SP28/226, fol. 246]. Spies may have met ignominious ends, but their work arguably required more nerve and commitment than normal soldiering, and there is no doubt that ‘they also served’.