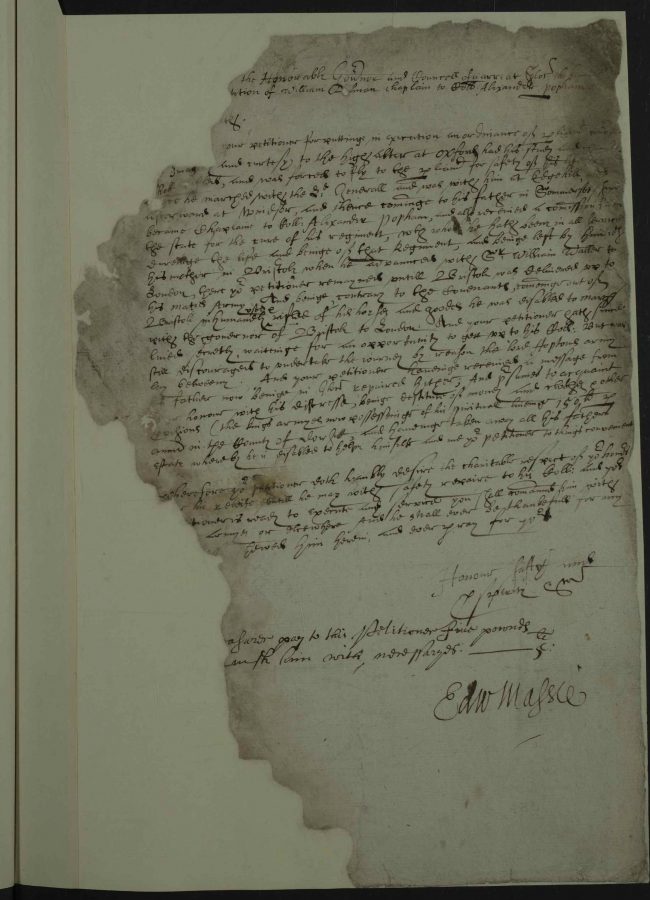 {That} your petitioner for ­puttinge in execution an ordinance of p[ar]liam[en]t concerning Images and curtesy to the high alter at Oxford had his study and chamber­ {w}holly {r}ifled, and was forced to fly to the p[ar]liam[en]t for safety of his life, {illegible} {illegible}ce he marched with the L[or]d Generall and was with him at Edgehill, {and} afterward at Windsor, and thence com[m]inge to his father in Sommersetshire became Chaplaine­ to Coll[onel] Alexander Popham, and also receiued a com[m]ission from the state for the cure of his regiment, w[i]th whom he hath beene in all service dureinge the life and beinge of that Regiment, and beinge left by him w[i]th his mother in Bristol when he advaunced with S[i]r William Waller to London, thence yo[u]r petitioner remayned vntill Bristol was deliuered vp to his Ma[jes]ties Army. And beinge, contrary to the Couenants, com[m]einge out of Bristoll inhumanely vsed & rifled of his horses and goodes he was disabled to march with the gouernor of Bristole to London: And your petitioner hath since liued secretly, waitinge for an opportunity to gett vp to his Coll[onel] But was still discouraged to vndertake the iourney by reason the lord Hoptons army lay betweene. And your petitioner haueinge receiued a message from his father now beinge in Glouc[ester] repaired hither; And p[re]sumes to acquaint {you}r honour with his distresse, beinge destitute of money and cloathes & other provisions (the kings armyes now possesseinge of his spirituall liueinge 150 li. p[er] ann[um] in the County of Dorsett, and haueinge taken away all his fathers estate whereby he is disabled to helpe himselfe and me yo[u]r petitioner to things convenient

Wherefore yo[u]r petitioner doth humbly desire the charitable respect of yo[u]r hono[u]rs {for} his releife vntill he may with safety repaire to his Coll[onel] and yo[u]r {peti]tioner is ready to execute any service you shall com[m]aund him with {the} armyes or elcewhere And he shall ever be thankefull for any {illegible} shewed him herein; and ever pray for yo[u]r

To the Honourable Governor and Council of War at Gloucester: the humble petition of William Dolman, chaplain to Colonel Alexander Popham.

That your petitioner, for ­putting in execution an ordinance of parliament concerning images and courtesy to the high alter at Oxford, had his study and chamber­ wholly rifled, and was forced to flee to the parliament for safety of his life. {Illegible} he marched with the Lord General and was with him at Edgehill, {and} afterward at Windsor. And then coming to his father in Somersetshire, became chaplain­ to Colonel Alexander Popham and also received a commission from the state for the cure of his regiment, with whom he has been in all service during the life and being of that regiment. And being left by him [Popham] with his mother in Bristol when he advanced with Sir William Waller to London, there your petitioner remained until Bristol was delivered up to his Majesty’s army. And being, contrary to the covenants, coming out of Bristol inhumanely vsed and rifled of his horses and goods, he was disabled to march with the governor of Bristol to London. And your petitioner has since lived secretly, waiting for an opportunity to get up to his Colonel, but was still discouraged to undertake the journey by reason the Lord Hopton’s army lay in between. And your petitioner, having received a message from his father now being in Gloucester, came there and presumes to acquaint your Honour with his distress, being destitute of money and clothes and other provisions (the king’s armies now possessing of his spiritual living of £150 per year in the county of Dorset, and having taken away all his father’s estate, whereby he is disabled to help himself and me your petitioner to things convenient).

Wherefore, your petitioner does humbly desire the charitable respect of your Honours for his relief until he may with safety return to his Colonel. And your petitioner is ready to execute any service you shall command him with the armies or elsewhere. And he shall ever be thankful for any {illegible} shown him herein; and ever pray for your

Mr Treasurer, pay to this petitioner five pounds to furnish him with necessaries: £5.