As we approach Remembrance Day, our blog considers the plight of all war widows, both past and present. How do the stories of our widows from the Civil Wars speak to those widowed by conflict today? Civil War Petitions was deeply honoured to join War Widows’ Stories for a discussion at a public engagement event organised by Dr Nadine Muller. Click on the video below to find out more (video will open in YouTube)… 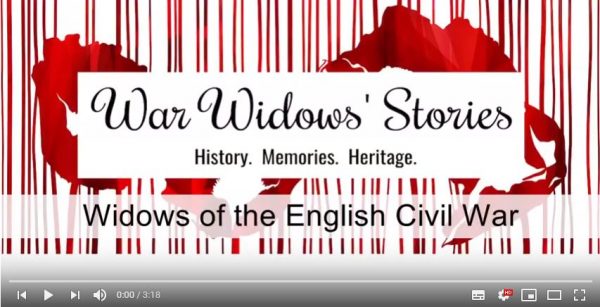 These video clips are taken from an event held at ‘The Firing Line Museum’ of the Welsh Soldier at Cardiff Castle on 8 June 2018. The discussion was organised by Dr Nadine Muller of Liverpool John Moores University as part of her ‘War Widows’ Stories’ project.

The project, which is funded by the AHRC works with a number of bodies including The War Widows’ Association of Great Britain to capture the lives of ‘war’s forgotten women past and present’. This discussion brought together past and present the persons of Lloyd Bowen, who is Co-Investigator on the Civil War Petitions project, as well as two widows of servicemen, Mary Moreland and Moira Kane.

The discussion considered the many aspects of widowhood and the ways in which widows’ stories are often omitted or neglected in accounts of wars past and present. Part of the originality of the Civil War Petitions project is that it seeks to recover widows and their stories from such a long time ago.

Although, of course, there were marked differences in the discussion of women’s experiences separated by hundreds of years, nonetheless there were some arresting similarities. Dr Bowen talked about the experience of war widows of the Civil Wars not knowing whether their husbands had perished. One of the contributors noted that she too had experienced something of the uncertainty of the battlefield, having been informed incorrectly on two occasions that her husband had died. The discussion also found similarities across time in widows’ difficulties dealing with the state and negotiating the complex bureaucracies of pensions and entitlements.

The Case for Universal Access and Design: The Example of the Civil War Petitions Project

‘The utter ruin of this poor town’: Quartering Soldiers in Haverfordwest during the Second Civil War.

The Wounded of Naseby

Fought on 14 June 1645, Naseby has long been considered the decisive engagement of the First Civil War. There are…

‘Killing a King’: The Sack of Leicester and the Trial of Charles I

On 17 to 19 December 2019, a three-part docudrama called ‘Charles I: Killing a King’, produced by Darlow Smithson Productions, was…

‘Members of one another’s miseries’: care in the community during and after the Civil Wars

The Civil War Petitions team expects to collect, transcribe and digitise around 4,500 petitions and certificates by the end of…

Recently, Civil War Petitions has been gathering petitions from maimed soldiers and war widows in the collections of the Staffordshire…