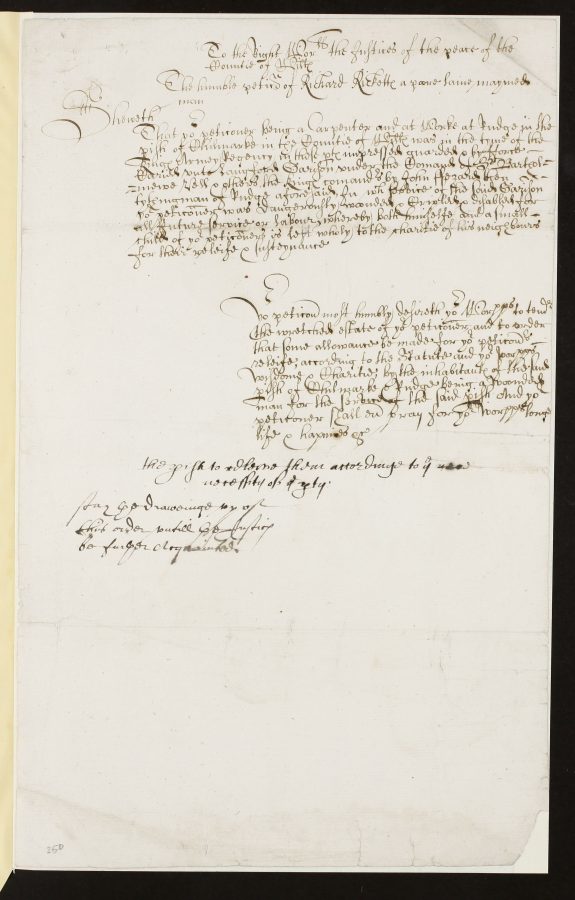 That yo[u]r petic[i]oner being a Carpenter and at Worke at Rudge in the p[ar]ish of Chilmarke in the Countie of Wilts[hire] was in the tyme of the kings Armey Regency in these p[ar]ts impressed guarded & by Force Caried vnto Langford Garison vnder the Comand of S[i]r Bartholmewe Pell & others the kings comand[e]rs by John Fezard then tythingman of Rudge aforesaid, In w[hi]ch service of the said Garison yo[u]r petic[i]oner was dangerously woonded & Cripled & disabled for all Future service or labour, whereby both himselfe and a small child of yo[u]r petic[i]oners is left wholy to the charitie of his neighbours for their releife & susteynance

To the Right Worshipful the Justices of the Peace of the county of Wiltshire.

That your petitioner being a carpenter and at work in Rudge in the parish of Chilmark in the county of Wiltshire, was in the time of the King’s army’s regency in these parts impressed, guarded and by force carried unto Langford Garrison under the command of Sir Bartholomew Pell and others of the King’s commanders, by John Fezard, then tithingman of Rudge aforesaid. In which service of the said garrison, your petitioner was dangerously wounded and crippled and disabled for all future service or labour, whereby both himself and a small child of your petitioner’s are left wholly to the charity of his neighbours for their relief and sustenance.

The parish to relieve them according to the [illegible] necessity of the party.

Stay the drawing up of this order until the Justices be further acquainted.