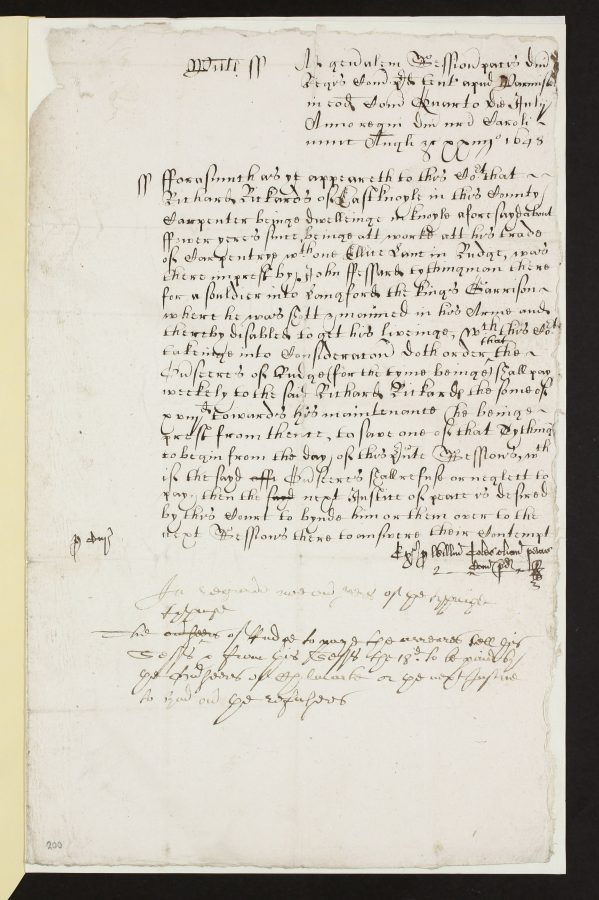 Forasmuch as yt appeareth to this Co[u]rt that Richard Rickarts of East Knoyle in this County Carpenter beinge dwelleinge in Knoyle aforesayd about Fower yeres since, beinge att worke att his trade of Carpentrye w[i]th one Ellice Lanc in Rudge, was there imprest by John Fessard tythingman there for a souldier into Langford the kings Garrison where he was shott & maimed in his Arme and thereby disabled to get his liveinge, w[hi]ch this Co[u]rt takeinge into Considerac[i]on doth order that the Ou[er]seeres of Rudge (for the tyme beinge) shall pay weekely to the said Richard Rickards the some of xviii d. towards his maintenance (he beinge prest from thence, to save one of that Tything) to begin from the day of this p[rese]nte Sessions, w[hi]ch if the sayd offi Ou[er]seeres shall refuse or neglect to pay, then the sayd next Justice of peace is desired by this Court to bynde him or them over to the next Sessions there to answere their Contempt

At His Majesty’s General Sessions of the Peace for the aforesaid county held at Warminster in the same county the fourth of July in the 24th year of the reign of our Lord King Charles, now of England etc., 1648.

Forasmuch as it appears to this court that Richard Rickarts of East Knoyle in this county, carpenter, having dwelt in Knoyle aforesaid about four years since, being at work at his trade of carpentry with one Ellice Lanc in Ridge, was there impressed by John Fessard, Tithingman, there for a soldier into Langford (the King’s garrison), where he was shot and maimed in his arm and thereby disabled to get his living; which this court taking into consideration does order that the Overseers of Ridge (for the time being) shall pay weekly to the said Richard Rickards the sum of 18 d. towards his maintenance (he being pressed from there to save one of that tithing) to begin from the day of this present Sessions, which if the said offi Overseers shall refuse or neglect to pay, then the said next Justice of the Peace is desired by this court to bind him or them over to the next Sessions there to answer their contempt.

By William Coles, Clerk of the Peace

of the county aforesaid.

In regard no Overseers of the tithing: