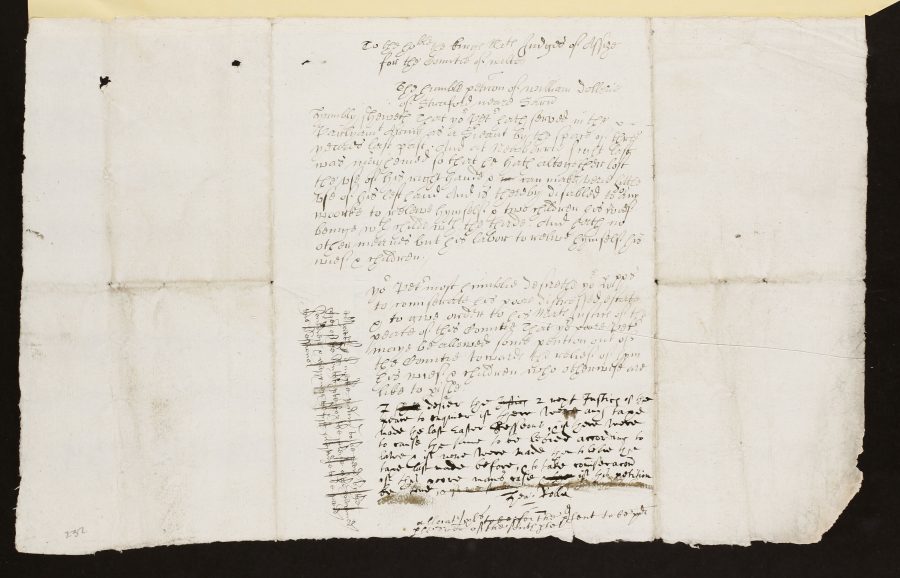 humbly sheweth That yo[u]r Pet[itioner] hath served in the Pairlyam[en]t Army as a S[arg]ieant by the space of three yeares last past. And at Newberrie fight last was mayhemed so that he hath altogether lost the vse of his right hande & [illegible] can make verie little vse of his left hand And is thereby disabled to do any woorke to releive hymself & two children his wief beinge w[i]th childe w[i]th the thirde. And hath no other meanes but his labor to relive hymself his wief & children.

I shall desier the Justic[e]s 2 next Justic[e]s of the peace to enquier if there were any taxe made the last Easter Sesseons, & if there were to cause the same to be levied according to lawe & if none were made then to levie the taxe last made before, & to take com[m]iserac[i]on of this poore mans case & then if this petition be true, & if no [illegible]

To the Honourable the King’s Majesty’s Judges of Assize for the county of Wiltshire.

The humble petition of William Dollerie of Stratford near Salisbury.

Humbly shows that your petitioner has served in Parliament’s army as a Sergeant by the space of three years last past. And at the last Newbury fight he was maimed so that he has altogether lost the use of his right hand and [illegible] can make very little use of his left hand, and is thereby disabled to do any work to relieve himself and two children, his wife being with child with the third. And he has no other means but his labour to relieve himself, his wife and children.

Your petitioner most humbly desires your Lordships to commiserate his poor distressed estate and to give order to his Majesty’s Justices of the Peace of this county that your poor petitioner may be allowed some pension out of the county towards the relief of him, his wife and children, who otherwise are likely to perish.

I shall desire the Justices two nearest Justices of the Peace to enquire if there were any tax made the last Easter Sessions and if there were, to cause the same to be levied according to law; and if none was made, then to levy the tax last made before, and to take commiseration of this poor man’s case and then if this petition is true. And if no [illegible]

Allocate 40 s. to be for the present, to be paid by the Treasurer for the South Part.

<Dollerie [illegible] marks per annum to be paid by the Treasurer for the South Part for the relief of the maimed soldiers and mariners and the first [illegible] to be paid this Sessions.>