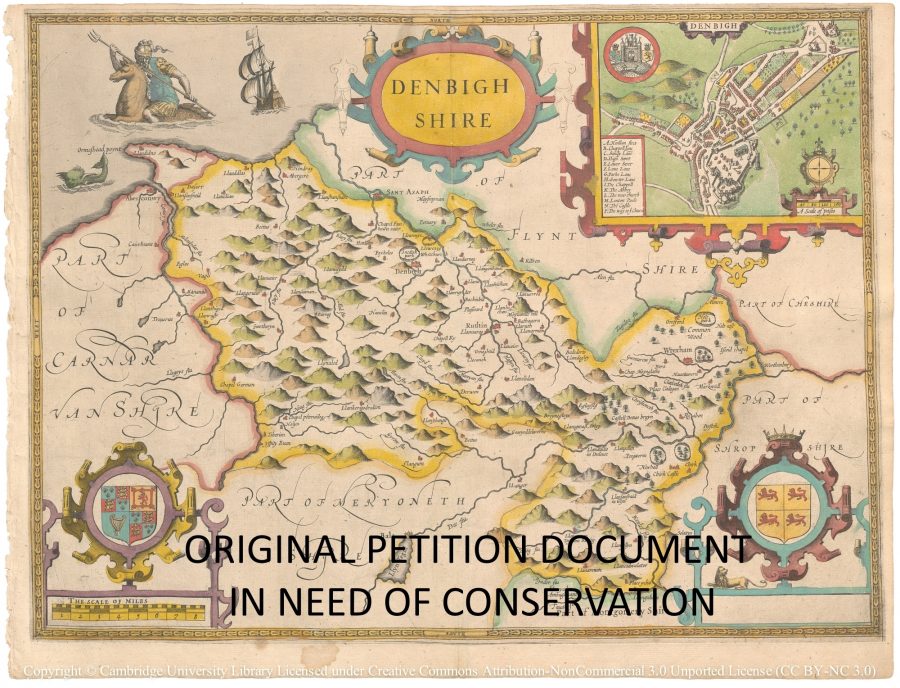 <In most> humble maner sheweth That wheras vpon the Enemyes approach to inviron & besiege the Capitall Mansion of yt famous Hall Hyarcoll by those hiberbolicall & well knowen Traitors the Oliveriant Crewe; ye said pet[itione]r being a servant in Roxester became a souldier vnder Liuetenant Lingham then in & vnder the command of Captaine Nicholas Armour, Gouernor for the defence of the said house; where yo[u]r pet[itione]r continued for the space of foure yeares from first to last & therein received many woundes in his body head, diverse Cutts in his body, & shott thrice in both his armes, the one whereof hee hath noe use of to this day & after being in part cured yo[u]r pet[itione]r willing & eager to follow the Game for his ma[jes]ties service imagining it a pleasure to dye therein, rather than a prey (though a poore one) or a prison[e]r vnder the tyrranie of Traitors, hee pursued them to Worcester Siege when Collonell Washington was Governor, all w[hi]ch time yo[u]r pet[itione]r w[i]th all the rest had there passe and soe came home to his parents and friends to bee relieved

In tender Comiseration of whose sadd and deploreable Condic[i]on and for yt yo[u]r pet[itione]r, hath bine a souldier ever in his ma[jes]ities service; never deserting the same vpon any occasion whatsoever, but alwayes readie & firme & Loyall to his power, and in respect of his manie and great woundes w[hi]ch hath taken from him, all power & strength, to gett his livinge by his labour

May it please yo[u]r worships to Consider the pr[e]misses & soe to admitt yo[u]r distressed pet[itione]r for a maymed soulder amongest the rest w[i]thin yt countie of Denbigh, and therein to receave such pentionarie paye for his woundes & service he had and did there, as yo[u]r worships shall see fitting yearlie towards his future subsistence.

To the Right Worshipful the Justices of the Peace for the county of Denbigh.

The humble petition of Robert Mathew of Vivod in the parish of Llangollen and county of Denbigh.

<In most> humble manner shows that whereas upon the enemy’s approach to environ and besiege the capital mansion of that famous hall Ercall by those hyperbolical and well-known traitors the Oliveriant crew, the said petitioner being a servant in Wroxeter, became a soldier under Lieutenant Lingham then in and under the command of Captain Nicholas Armour, Governor for the defence of the said house, where your petitioner continued for the space of four years from first to last. And therein, received many wounds in his body head, divers cuts in his body, and shot three times in both his arms, the one whereof he has no use of to this day. And after, being in part cured, your petitioner willing and eager to follow the game for his Majesty’s service, imagining it a pleasure to die therein rather than be a prey (though a poor one) or a prisoner under the tyranny of traitors, he pursued them to Worcester Siege when Colonel Washington was Governor. All which time your petitioner with all the rest had there pass and so came home to his parents and friends to be relieved.

In tender commiseration of whose sad and deplorable condition, and for that your petitioner has been a soldier ever in his Majesty’s service, never deserting the same upon any occasion whatsoever, but always ready and firm and loyal to his power, and in respect of his many and great wounds which have taken from him all power and strength to get his living by his labour.

May it please your Worships to consider the premises and so to admit your distressed petitioner for a maimed soldier amongst the rest within that county of Denbigh, and therein to receive such pensioner’s pay for his wounds and service he had and did there as your Worships shall see fitting yearly towards his future subsistence.

And your poor petitioner (as bound) shall ever pray for your Worships.