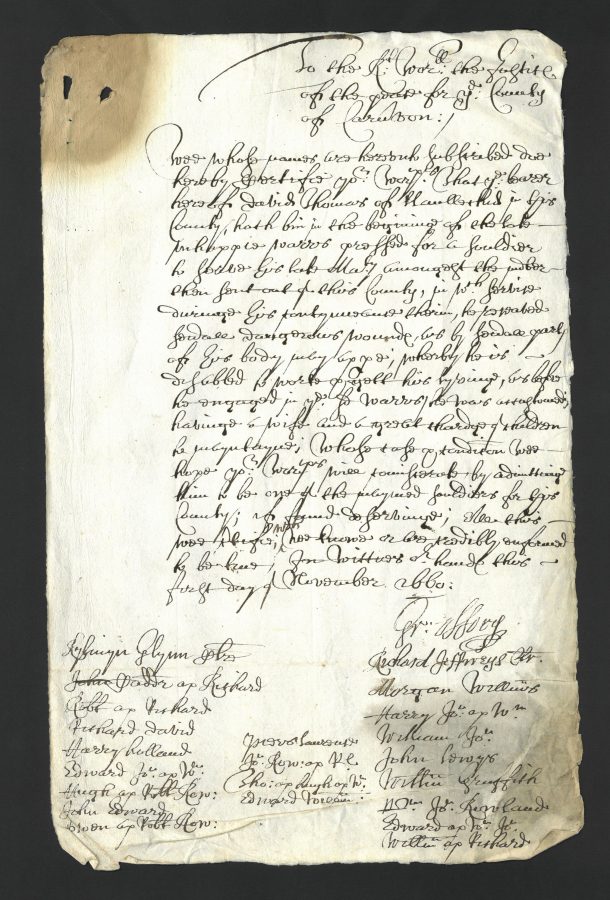 To the R[igh]t Wor[shipfu]ll Justices of the peace for ye County of Carnarvon:

Wee whose names are herevnto subscribed doe hereby Certifie yo[u]r Wor[shi]ps That ye bearer hereof David Thomas of Llanllechid in this County, hath bin in the beginning of the late vnhappie warres pressed for a Souldier to serve his late Ma[jes]ty amongest the nu[m]ber then sent out of this County, in w[hi]ch service duringe this contynueance therin, he receaved seu[er]all dangerous woundes as by seu[er]all partes of his body may app[er]e; whereby he is disabled to worke & gett his lyvinge, as before he engaged in ye s[ai]d warrs he was accustomed; havinge a wife and a great chardge of children to mayntayne; whose case & condic[i]on wee hope yo[u]r Wor[shi]ps will comiscerate [sic.] by admittinge him to be one of the maymed souldiers for this County; if found deservinge; All this wee certifie w[hi]ch wee knowe or be ceadibly enformed to be true, In wittnes o[u]r handes this first day of November 1660:

To the Right Worshipful Justices of the Peace for the county of Carnarvon.

We, whose names are hereunto subscribed, do hereby certify your Worships that the bearer hereof, David Thomas of Llanllechid in this county, has been in the beginning of the late unhappy wars pressed for a soldier to serve his late Majesty amongst the number then sent out of this county. In which service during this continuance therein, he received several dangerous wounds, as by several parts of his body may appear. Whereby, he is disabled to work and get his living as before he engaged in the said wars he was accustomed, having a wife and a great charge of children to maintain. Whose case and condition we hope your Worships will commiserate by admitting him to be one of the maimed soldiers for this county, if found deserving. All this we certify, which we know or be credibly informed to be true. In witness, our hands, this first day of November 1660.