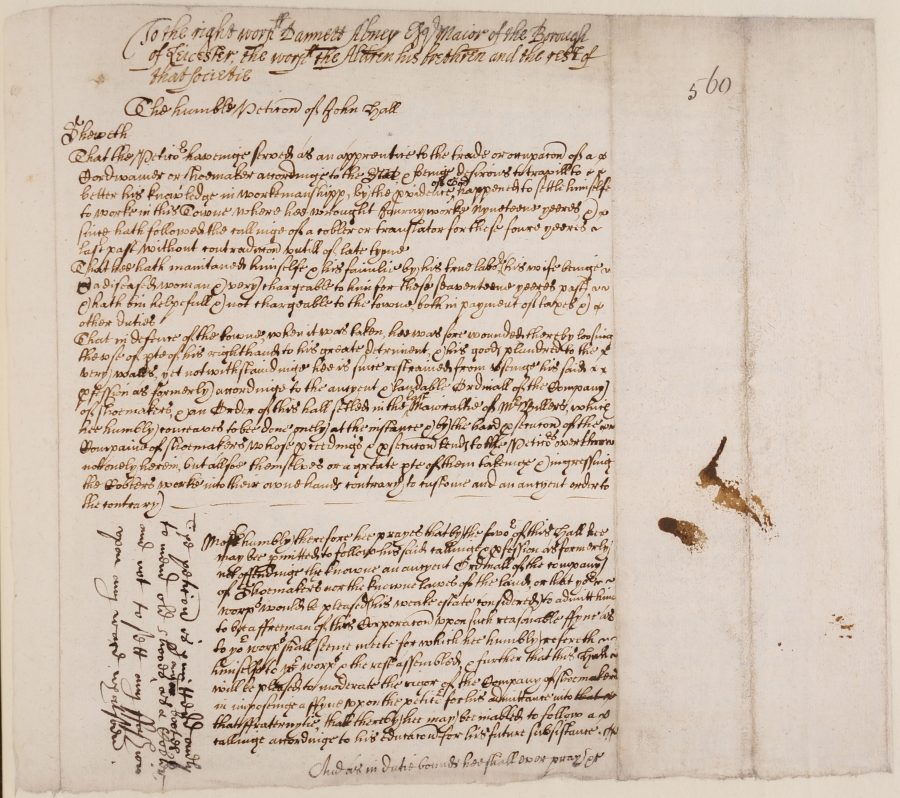 To the right wor[shipfu]ll Dannett Abney Esq[ui]r[e] Maior of the Borough of Leicester, the wor[shi]p[fu]ll the Ald[e]r[m]en his brethren and the rest of that societie

The humble petic[i]on of John Hall

That the Petico[ne]r haveinge served as an apprentice to the trade or occupac[i]on of a Cordwainer or shoemaker according to the Stat[ute] & beinge desirous to travill to better his knowledge in workemanshipp, by the p[ro]vidence of God happened to settle himselfe to worke in this Towne where he wrought Journyworke nyneteene yeares & since hath followed the callinge of a cobler or translator for these foure yeares last past without contradicc[i]on vntill of late tyme

That hee hath maintained himselfe & his familie by his true labo[u]r (his wife beinge & a diseased woman & very chargeable to him for these seaventeene yeeres past) & hath bin helpefull & not chargeable to the towne, both in payment of taxes & other duties

That in defence of the towne, when it was taken, hee was sore wounded thereby loosing the vse of p[ar]te of his right hand to his greate detriment, & his goods plundred to the very walls, yet notwithstandinge hee is since restrained from using his said p[ro]fession as formerly accordinge to the ancyent & laudable Ordinall of the Company of shoemakers, & an Order of this hall settled in the last Maioraltie of Mr Billers, which hee humbly conceaves to bee done onely at the instance & by the hard p[ro]secucon of the Companie of shoemakers whose p[ro]ceedings & p[ro]secuc[i]on tends to the Petico[n]ers overthrow not onely herein, but allsoe themselves or a greate p[ar]te of them takeinge & ingressing the Coblers worke into their owne hands contrary to custome and an ancient order to the contrary.

Most humbly therefore hee prayes that by the favo[u]r of this Hall hee may bee p[er]mitted to follow his said callinge & p[ro]fession as formerly not offendinge the knowne ancyent Ordinall of the company of Shoemakers nor the knowne lawes of the land, or that yo[u]r wor[shi]ps would be pleased (his weake estate considered) to admit him to bee a Freeman of this Corporac[i]on vpon such reasonable  Fyne as to yo[u]r wor[shi]ps shall seeme meete for which hee humbly refereth himselfe to yo[u]r wor[shi]ps & the rest assembled, & further that this Hall will be pleased to moderate the rigor of the Company of shoemakers in imposeinge a Fyne upon the petico[ne]r for his admittance into that that Fraternytie, that thereby hee may bee inabled to follow a callinge according to his educac[i]on for his future subsistence.

And as in dutie bound hee shall ever pray &c

<The petic[i]on[er] is p[er]mitted onely to mend old shooes and bootes as a Cobler, and not to sett any Fashion vpon any ware whatsoeu[er].>

To the Right Worshipful Dannett Abney Esquire, Mayor of the Borough of Leicester, the Worshipful the Aldermen his Brethren and the rest of that Society.

The humble petition of John Hall.

That the petitioner having served as an apprentice to the trade or occupation of a cordwainer or shoemaker according to the Statute and being desirous to travel to better his knowledge in workmanship, by the providence of God happened to settle himself to work in this town, where he wrought journey-work nineteen years and since has followed the calling of a cobbler or translator for these four years last past without contradiction until of late time.

That he has maintained himself and his family by his true labour (his wife being & a diseased woman and very chargeable to him for these seventeen years past) and has been helpful and not chargeable to the town, both in payment of taxes and other duties.

That in defence of the town, when it was taken, he was sore wounded thereby loosing the use of part of his right hand to his great detriment, and his goods plundered to the very walls. Yet notwithstanding, he is since restrained from using his said profession as formerly according to the ancient and laudable Ordinal of the Company of Shoemakers, and an order of this Hall settled in the last Mayoralty of Mr Billers, which he humbly conceives to be done only at the instance and by the hard prosecution of the Company of Shoemakers, whose proceedings and prosecution tends to the petitioner’s overthrow not only herein but also themselves or a great part of them taking and engrossing the cobblers’ work into their own hands, contrary to custom and an ancient order to the contrary.

Most humbly therefore, he prays that by the favour of this Hall he may be permitted to follow his said calling and profession as formerly, not offending the known ancient Ordinal of the Company of Shoemakers nor the known laws of the land, or that your Worships would be pleased (his weak estate considered) to admit him to be a freeman of this Corporation upon such reasonable fine as to your Worships shall seem meet, for which he humbly refers himself to your Worships and the rest assembled. And further, that this Hall will be pleased to moderate the rigour of the Company of Shoemakers in imposing a fine upon the petitioner for his admittance into that that fraternity, that thereby he may be enabled to follow a calling according to his education for his future subsistence.

And as in duty bound he shall ever pray etc.

<The petitioner is permitted only to mend old shoes and boots as a cobbler, and not to set any fashion upon any ware whatsoever.>