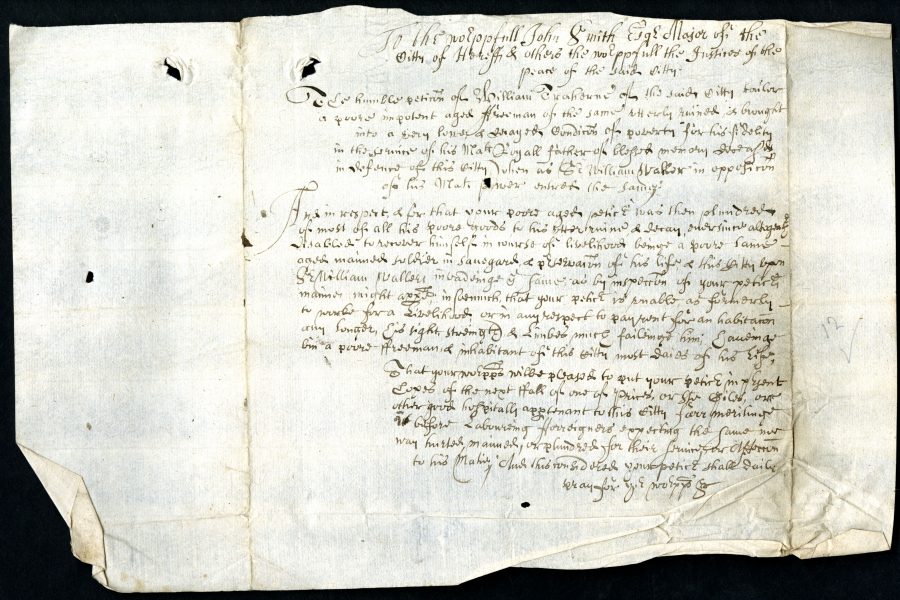 To the Wor[shi]ppfull John Smith, Esq[ui]r[e] Major of the Citty of Hereford & others the wor[shi]ppfull the Justices of the peace of the said Citty.

The humble petic[i]on of William Traherne of the said Citty tailor a poore impotent aged Freeman of the same vtterly ruined, & brought into a very lowe & decayed Condic[i]on of poverty for his fidelity in the seruice of his Ma[jes]tys Royall father of blessed memory deceased in defence of this Citty, when as S[i]r William Waller in opposic[i]on of his Majesties power entred the same:

And in respect, & for that your poore aged petic[ione]r was then plundred of most of all his poore goods to his vtter ruine, & decay, euer since altogeath[e]r disabled to recover himself in course of livelihood beinge a poore lame aged maimed soldier in sauegard, & pr[e]servac[i]on of his life, & this Citty vpon S[i]r William Wallers invadeing ye same, as by inspecc[i]on of your petic[ione]rs maimes might app[ea]re; insoemuch, that your petic[ione]r is vnable, as formerly to worke for a Livelihood, or in any respect to pay rent for an habitac[i]on any longer, his right strength & Limbes much faileinge him; haueing bin a poore Freeman & inhabitant of this Citty most daies of his Life,

The humble petition of William Traherne of the said city, tailor: a poor, impotent, aged freeman of the same, utterly ruined, and brought into a very low and decayed condition of poverty for his fidelity in the service of his Majesty’s royal father of blessed memory, deceased, in defence of this city when as Sir William Waller, in opposition of his Majesty’s power, entered the same.

And in respect and for that your poor aged petitioner was then plundered of most of all his poor goods to his utter ruin and decay, ever since altogether disabled to recover himself in course of livelihood, being a poor, lame, aged, maimed soldier in safeguard and preservation of his life and this city upon Sir William Waller’s invading the same, as by inspection of your petitioner’s maims might appear. Insomuch, that your petitioner is unable as formerly to work for a livelihood or in any respect to pay rent for an habitation any longer, his right strength and limbs much failing him, having been a poor freeman and inhabitant of this city most days of his life.

That your Worships will be pleased to put your petitioner in present hopes of the next fall of one of Prices or Saint Giles’s or other good hospitals appurtenant to this city, far meriting it before labouring foreigners expecting the same in no way hurt, maimed, or plundered for their service, or affection to his Majesty. And this considered, your petitioner shall daily pray for your Worships etc.