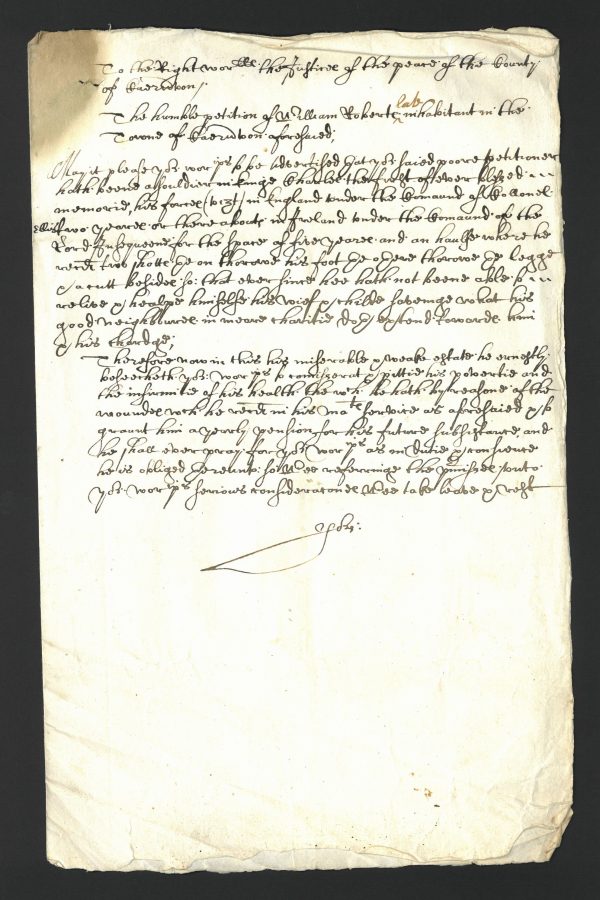 To the Right wor[shipfu]lls the Justices of the peace of the County of Caern[ar]von.

The humble petition of William Roberts late inhabitant in the Towne of Caern[ar]von aforesaied;

May it please yo[u]r wor[shi]ps to be advertised that yo[u]r saied poore petitioner hath beene a souldier in kinge Charles the first of ever blessed memorie, his forces (vizt) in England vnder the Comaund of Collonel Ellis two yeares or thereabouts in Ireland vnder the Comaund of the Lord Insequeene for the space of five yeares and an haulfe where he rec[eive]d two shotts the on thorowe his foot the othere thorowe the legge & a cutt besides so that ever since hee hath not beene able to relive & healpe himselfe his wief & childe saveinge what his good neighboures in meare charitie doth extend towards him & his chardge;

To the Right Worshipful the Justices of the Peace of the county of Carnarvon.

The humble petition of William Roberts, late inhabitant in the town of Carnarvon aforesaid.

May it please your Worships to be advertised that your said poor petitioner has been a soldier in King Charles the First of ever blessed memory his forces, as follows: in England under the command of Colonel Ellis two years or thereabouts; in Ireland under the command of the Lord Insequeene for the space of five years and a half, where he received two shots (the one through his foot, the other through the leg) and a cut besides, so that ever since he has not been able to relieve and help himself, his wife and child, saving what his good neighbours in mere charity do extend towards him and his charge.

Therefore, now in this his miserable and weak estate, he earnestly beseeches your Worships to commiserate and pity his poverty and the infirmity of his health, the which he has by reason of the wounds which he received in his Majesty’s service as aforesaid, and to grant him a yearly pension for his future subsistence. And he shall ever pray for your Worships, as in duty and conscience he is obliged thereunto. So we referring the premises unto your Worships’ serious considerations, we take leave and rest,