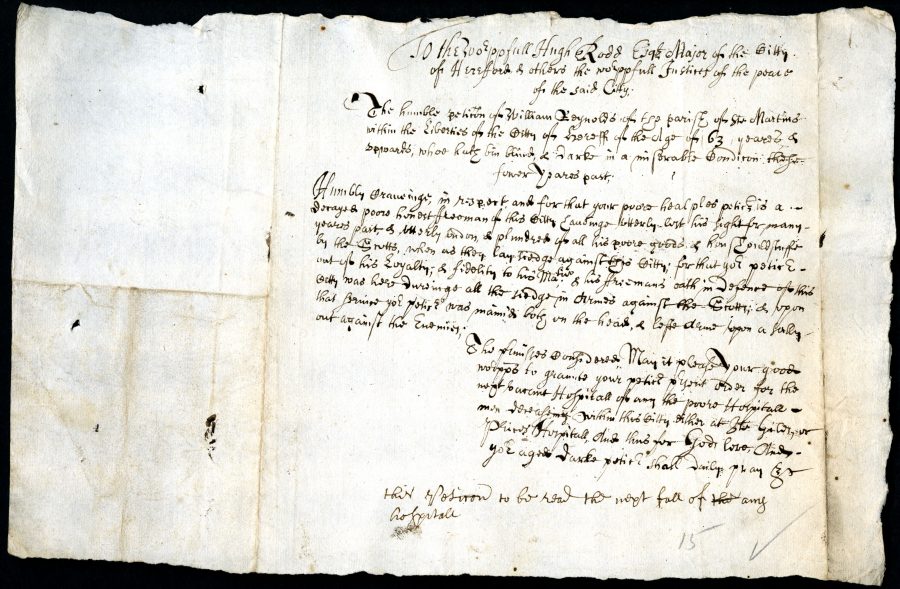 To the Wor[shi]ppfull Hugh Rodd Esq[ui]r[e] Major of the Citty of Herefford & others the wor[shi]ppfull Justices of the peace of the said Citty:

The humble petic[i]on of William Reynolds of the parish of St Martins within the Liberties of the Citty of Hereff[ord] of the Age of 63 yeares & vpwards, whoe hath bin blind, & darke in a miserable Condicon these fower years past:

Humbly Craueinge in respect and for that your poore healples petic[ione]r is a decayed poore honest Freeman of this Citty haueing vtterly lost his sight for many yeares past, & vtterly vndon, & plundred of all his poore goods & houshould stuffe by the Scotts, when as they lay siedge against this Citty; for that yo[u]r petic[ione]r out of his Loyalty; & fidelity to his Ma[jes]tie & his Freemans oath in defence of his Citty was here dureinge all the siedge in Armes against the Scotts; & vpon that seruice yo[u]r petic[ione]r was maim’d both in the head, & lefte Arme vpon a sally out against the Enemies;

The p[re]misses Considered May it please your good wor[shi]pps to graunte your petic[ione]r pr[e]sent order for the next vacant Hospitall of any the poore Hospitall men deceaseing within this Citty either at the Sainte Giles, or Prices Hospitall, And this for Gods love, And yo[u]r aged darke petic[ione]r shall daily pray &c

The humble petition of William Reynolds of the parish of St Martin’s within the liberties of the city of Hereford, of the age of 63 years and upwards, who has been blind and dark in a miserable condition these four years past.

Humbly craving, in respect and for that your poor helpless petitioner is a decayed poor honest Freeman of this city, having utterly lost his sight for many years past, and utterly undone and plundered of all his poor goods and household stuff by the Scots when as they lay siege against this City. For that your petitioner, out of his loyalty and fidelity to his Majesty and his Freeman’s oath, in defence of his City was here during all the siege in arms against the Scots and upon that service your petitioner was maimed both in the head and left arm upon a sally out against the enemies.

The premises considered, may it please your good Worships, to grant your petitioner present order for the next vacant hospital of any the poor hospital men deceasing within this city, either at the Saint Giles’s or Prices Hospital. And this for God’s love. And your aged, dark petitioner shall daily pray etc.

This petition to be read the next fall of the any hospital.