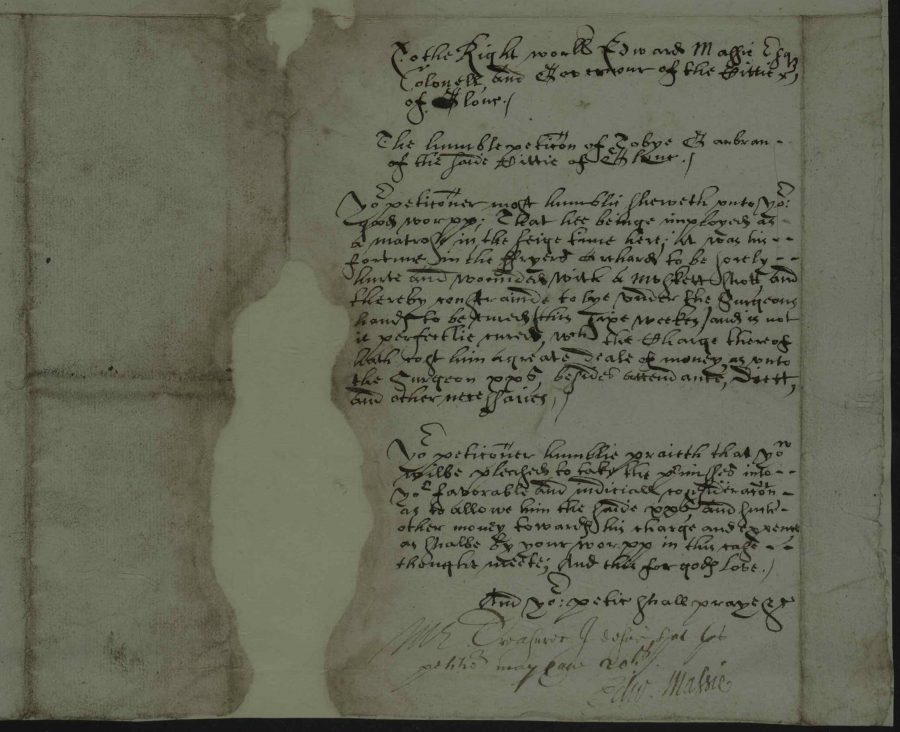 To the Right wor[shipfu]ll Edward Massie Esq Colonell, and Governour of the Cittie, of Glouc[ester].

Yo[u]r petic[i]oner most humblie sheweth vnto yo[u]r good wor[shi]pp; That hee beinge imployed as a matrose in the seige time here; it was his fortune in the Fryers Orchard to be sorely hurte and wounded with a mvskett shott, and thereby constrainde to lye vnder the Surgeons hands to be cured (this sixe weekes) and is not it perfectlie cured, w[i]th the Charge thereof hath cost him a greate deale of money, as vnto the Surgeon xx s., besides attendance, diett, and other necessaries.

Yo[u]r petic[i]oner humblie praieth that yow wil be pleased to take the pr[e]smisses into yo[u]r favorable and iudiciall considerac[i]on as to allowe him the saide xx s., and such other money towards his charge and expence, as shal be by your wor[shi]pp in this case thought meete; And this for gods love.

Mr Treasurer I desire that this petition[ne]r may haue 20 s.

To the Right Worshipful Edward Massie Esq., Colonel and Governor of the city of Gloucester.

The humble petition of Toby Ganbran of the said City of Gloucester.

Your petitioner most humbly shows unto your good Worship that he being employed as a matross in the siege time here, it was his fortune in the Friars’ Orchard to be sorely hurt and wounded with a musket shot, and thereby constrained to lie under the surgeon’s hands to be cured (this six weeks) and is not yet perfectly cured, with the charge thereof has cost him a great deal of money as unto the surgeon 20 s., besides attendance, diet, and other necessaries.

Your petitioner humbly prays that you will be pleased to take the premises into your favourable and judicial consideration as to allow him the said 20 s., and such other money towards his charge and expense as shall be by your Worship in this case thought meet;  and this for God’s love.

And your petitioner shall pray etc.

Mr Treasurer, I desire that this petitioner may have 20 s.