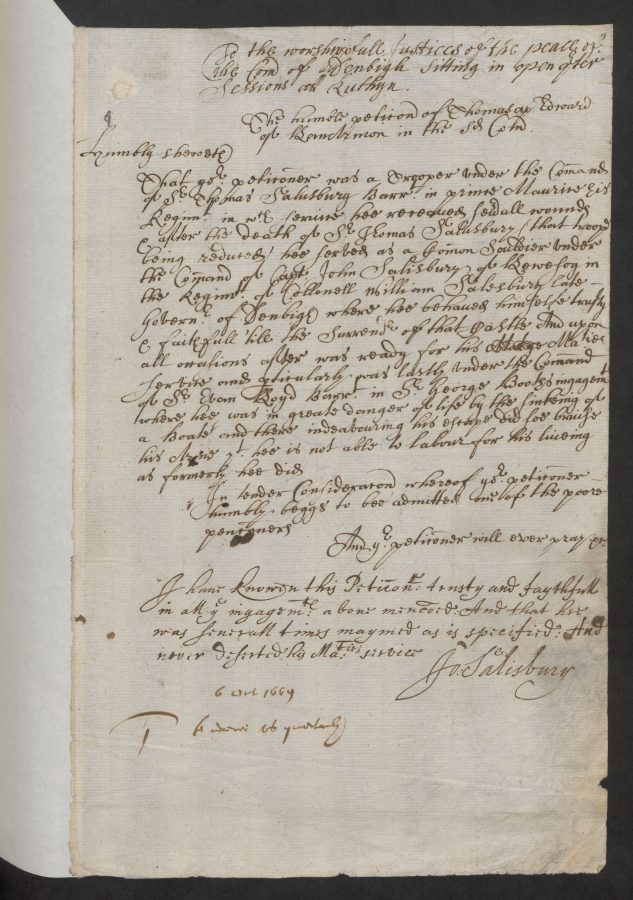 To the worshipfull the Justices of the peace of the Com[itatu] of Denbigh in open q[ua]rter Sessions att Ruthyn.

I haue knowen this Petic[i]oner trusty and faythfull in all ye ingagem[en]ts aboue menc[i]o[n]ed: And that hee was seuerall times maymed as is specified: And never deserted his Ma[jes]ties service

To the Worshipful the Justices of the Peace of the county of Denbigh in open Quarter Sessions at Ruthin.

The humble petition of Thomas ap Edward of Llanarmon in the said county.

That your petitioner was a trooper under the command of Sir Thomas Salusbury, Baronet, in Prince Maurice’s Regiment, in which service he received several wounds. And after the death of Sir Thomas Salusbury (that troop being reduced), he served as a common soldier under the command of Captain John Salisbury of Llewesog in the regiment of Colonel William Salesbury, late Governor of Denbigh, where he behaved himself trusty and faithful ‘till the surrender of that castle. And upon all occasions after, was ready of his Madge Majesty’s service. And particularly, was lastly under the command of Sir Evan Lloyd, Baronet, in Sir George Booth’s engagement, where he was in great danger of life by the sinking of a boat and there endeavouring his escape did so bruise his arm that he is not able to labour for his living as formerly he did.

In tender consideration whereof, your petitioner humbly begs to be admitted one of the poor pensioners.

And your petitioner will ever pray etc.

I have known this petitioner trusty and faithful in all the engagements above mentioned, and that he was several times maimed as is specified and never deserted his Majesty’s service.