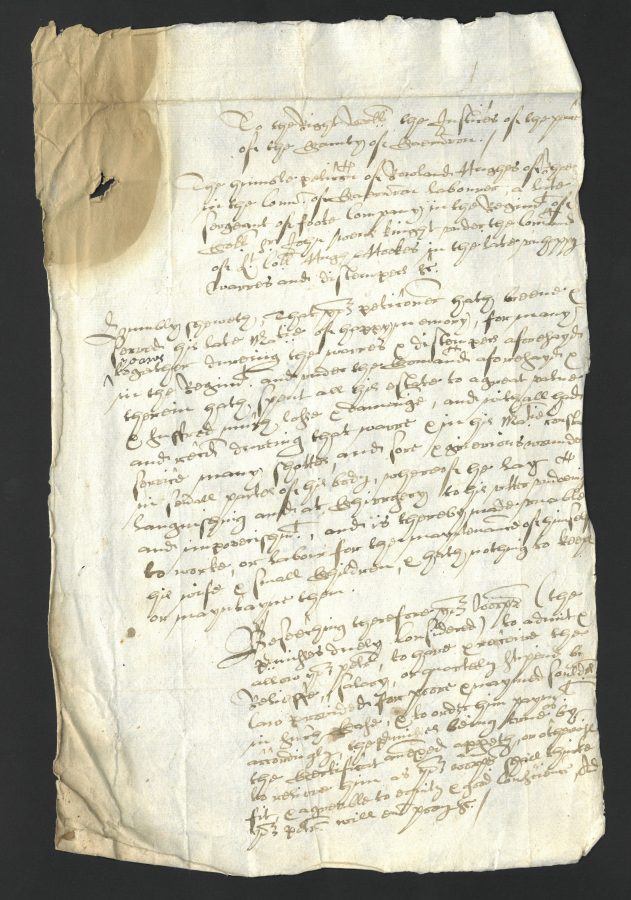 To the Right Wor[shipfu]ll the Justices of the peace of the County of Caernarvon.

Humbly sheweth, That yo[u]r petic[i]oner hath beene & served his late Ma[jes]tie of happy memory, for many yeares together dureing the warres & distempers aforesayd in the Regim[en]t and vnder the Com[m]and aforesayd & therein hath spent all his estate to a great value & suffred much losse & damaige, and withall had and rec[eive]d dureing that warre & in his Ma[jes]ties constant service many shottes, and sore & grievious woundes in seu[er]all partes of his body, whereof he lay languishing and at Chiurgery to his vtter vndoeing and impoverishm[en]t, and is thereby made vnable to worke, or labour for the mayntenance of himself and his wife & small Children, & hath nothing to keepe or mayntayne them.

To the Right Worshipful the Justices of the Peace of the county of Caernarvon.

The humble petition of Rowland Hughes of Rhiw in the county of Carnarvon, labourer, a late sergeant of a foot company in the regiment of Colonel Sir John Owens, knight, under the command of Lieutenant-Colonel Hugh Hookes in the late unhappy wars and distempers etc.

Humbly shows, that your petitioner has been and served his late Majesty of happy memory for many years together during the wars and distempers aforesaid, in the regiment and under the command aforesaid. And therein, has spent all his estate to a great value and suffered much loss and damage. And withal, had and received during that war and in his Majesty’s constant service many shots, and sore and grievous wounds in several parts of his body, whereof he lay languishing and at surgery to his utter undoing and impoverishment. And is thereby made unable to work or labour for the maintenance of himself and his wife and small children, and has nothing to keep or maintain them.

Beseeching therefore your Worships (the premises duly considered) to admit and allow your petitioner to have and receive the relief, salary or quarterly stipend by law provided for poor and maimed soldiers in such cases, and to order him payment accordingly (the premises being true as by the certificate annexed appears) or otherwise to relieve him as your Worships shall think fit and agreeable to equity and good conscience. And your petitioner will ever pray etc.