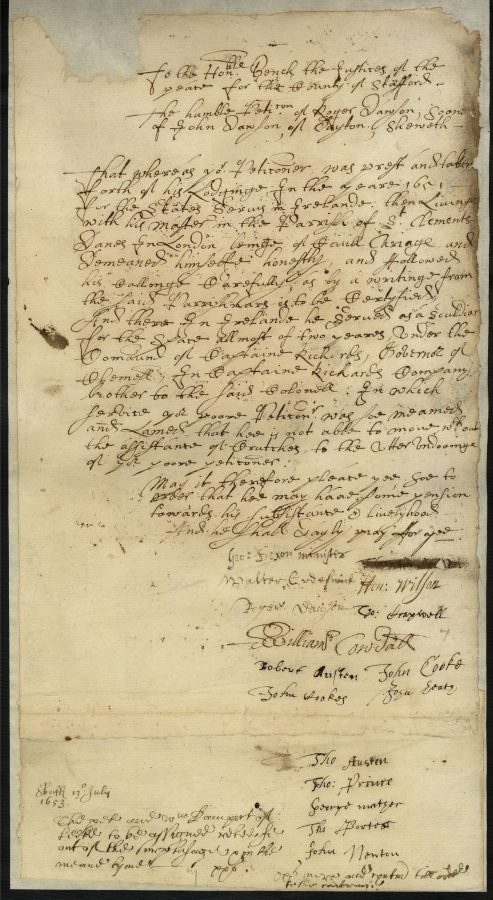 The humble Petic[i]on of Roger Dawson, Soane of John Dawson, of Gayton, sheweth

That whereas yo[u]r Petic[i]oner was prest and taken forth of his Lodginge, In the yeare 1651 for the States Seruis in Irelande: then Livinge with his Master in the Parrish of St Clements Danes In London, beinge of Ciuill Cariage, and demeaned himselfe honestly, and Followed his Callinge Carefully, as by a writinge from the said Parrishnars is to be Certyfied, And there In Irelande he serued as a souldier for the space allmost of two yeares, vnder the Com[m]aund of Captaine Richards, Governor of Clemell, In Captaine Richards Company brother to the said Colonell: In which service yo[u]r poore Petic[i]on[e]r was soe meamed and Lamed that hee is not able to moue w[i]thout the assistance of Crutches, to the vtter vndooinge of yo[u]r poore petic[i]oner:

May it therefore please yee, soe to order that hee may haue some pension towards his subsistence & liuelyhood.

And he shall dayly pray For yee.

<The pet[itione]r and W[illia]m Davnport of Leeke to be assigned reliefe out of the surplusage & in the meane tyme xx s.>

xx s. more and contin[ued] till ordered to the contrarie.

To the Honourable Bench, the Justices of the Peace for the county of Stafford.

The humble petition of Roger Dawson, son of John Dawson of Gayton, shows:

That whereas your petitioner was pressed and taken forth of his lodging in the year 1651 for the State’s service in Ireland, then living with his master in the parish of St Clement Danes in London, being of civil carriage and demeaned himself honestly, and followed his calling carefully, as by a writing from the said parishioner is to be certified. And there in Ireland, he served as a soldier for the space almost of two years under the command of Captain Richards, Governor of Clonmel, in Captain Richards’s company, brother to the said Colonel. In which service, your poor petitioner was so maimed and lamed that he is not able to move without the assistance of crutches, to the utter undoing of your poor petitioner.

May it therefore please your so to order that he may have some pension towards his subsistence and livelihood.

And he shall daily pray for you.

<The petitioner and William Davnport of Leek to be assigned relief out of the surplusage and in the meantime, 20 s.>

20 s. more and continued ‘til ordered to the contrary.