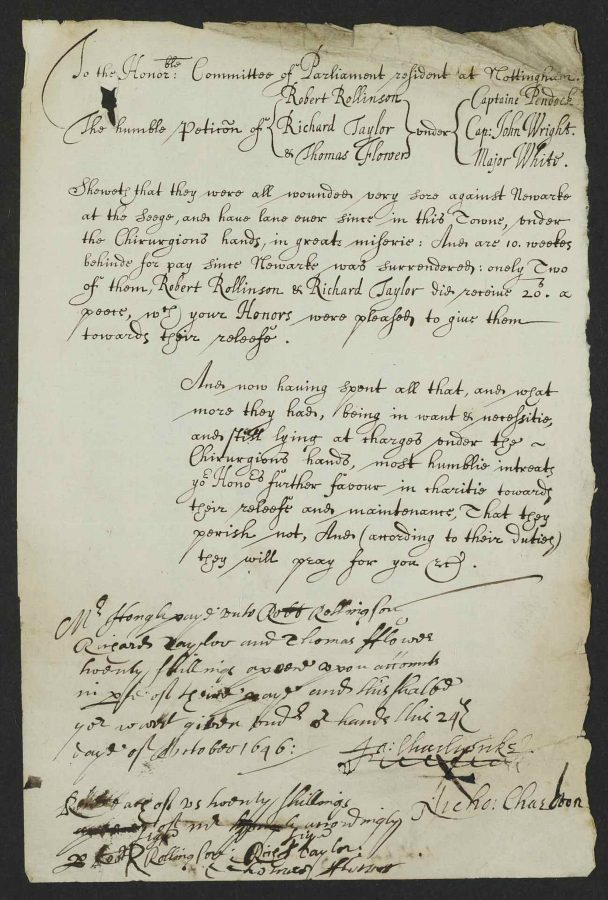 To the Hono[ura]rble Committee of Parliament resident at Nottingham.

Sheweth that they were all wounded very sore against Newarke at the Seege, and haue lane euer since in this Towne, vnder the Chirurgions hands, in greate miserie: And are 10 weekes behinde for pay since Newarke was surrendered: onely Two of them, Robert Rollinson & Richard Taylor did receiue 20 s. a peece, w[hi]ch your Honors were pleased to giue them towards their releefe.

And now hauing spent all that, and what more they had, being in want & necessitie, and still lying at charges vnder the Chirurgions hands, most humblie intreats yo[u]r Hono[u]rs further favour in charitie towards their releefe and maintenance, That they perish not, And (according to their duties) they will pray for you &c.

To the Honourable Committee of Parliament resident at Nottingham.

The humble petition of

Shows that they were all wounded very sorely against Newark at the siege, and have lain ever since in this town under the surgeon’s hands in great misery, and are 10 weeks behind for pay since Newark was surrendered. Only two of them, Robert Rollinson and Richard Taylor, did receive 20 s. apiece, which your Honours were pleased to give them towards their relief.

And now having spent all that and what more they had, being in want and necessity, and still lying at charge under the surgeon’s hands, most humbly entreat your Honours’ further favour in charity towards their relief and maintenance that they perish not. And (according to their duties) they will pray for you etc.

Mr Hough, pay unto Robert Rollingson, Richard Taylor and Thomas Flowers twenty shillings apiece upon accounts in part of their pay, and this shall be your warrant. Given under our hands this 24th day of October 1646.

Received each of us twenty shillings [apiece] of Mr Hough accordingly.