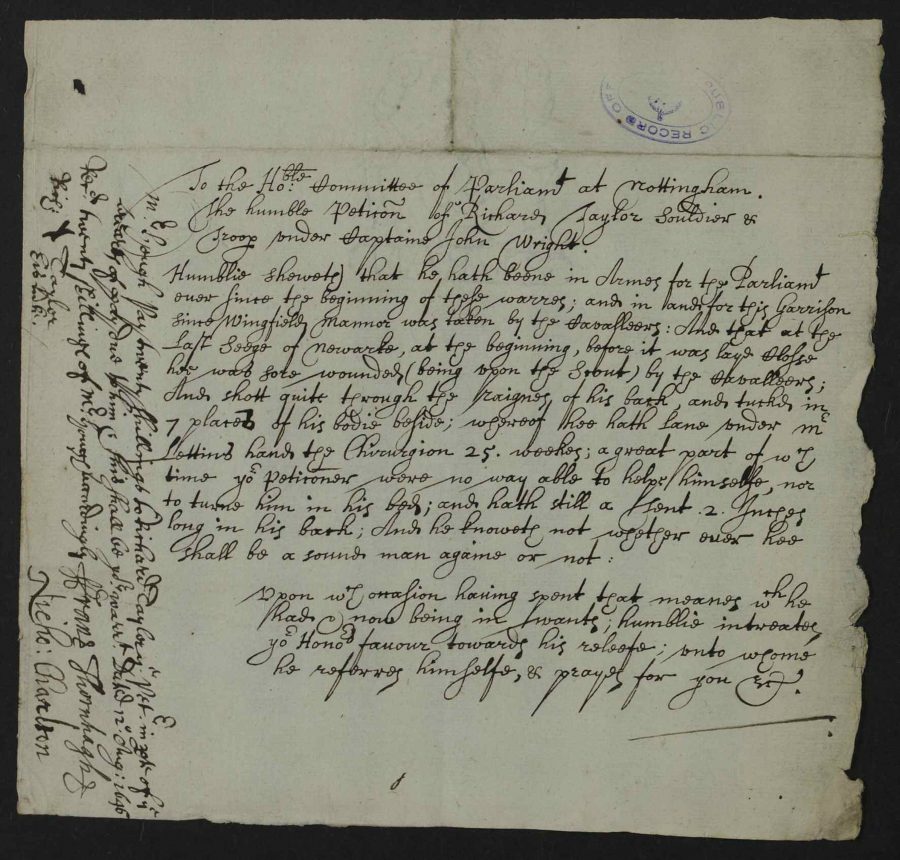 Humblie sheweth that he hath beene in Armes for  the Parliam[en]t euer since the beginning of these warres; and in and for this Garrison since Wingfield Mannor was taken by the Cavalleers: And that at the last Seege of Newarke, at the beginning, before it was layd Closse hee was sore wounded (being upon the Scout) by the Cavalleers; And shott quite through the raignes of his back, and tuckes, in 7 places of his bodie beside; whereof hee hath lane vnder Mr Lettins hand the Chruigion 25. weekes; a great part of w[hi]ch time yo[u]r Petic[i]oner were no way able to helpe himselfe, nor to turne him in his bed; and hath still a rent 2 Inches long in his back; And he knoweth not whether euer hee shall be a sound man againe or not:

<Mr Hough Pay twenty shillings to Richard Taylor ye Pet[itione]r in p[ar]te of ye arrears of pay due to him & this shall be yo[u]r war[an]t. Dated 12th Aug[ust] 1646>

The humble petition of Richard Taylor, soldier and trooper under Captain John Wright.

Humbly shows that he has been in arms for the parliament ever since the beginning of these wars, and in and for this garrison since Wingfield Manor was taken by the cavaliers. And that at the last siege of Newark, at the beginning before it was laid close, he was sore wounded (being upon the scout) by the cavaliers, and shot quite through the reins of his back and tucks, in 7 places of his body besides, whereof he has lain under Mr Lettins’s hand the surgeon 25 weeks.  A great part of which time, your petitioner was in no way able to help himself, nor to turn him in his bed, and has still a rent 2 inches long in his back. And he knows not whether he shall be a sound man again or not.

Upon which occasion, having spent the means which he had and now being in wants, humbly entreats your Honours’ favour towards his relief. Unto whom he refers himself, and prays for you etc.

<Mr Hough, pay twenty shillings to Richard Taylor the petitioner in part of the arrears of pay due to him, and this shall be your warrant. Dated 12th August 1646.>