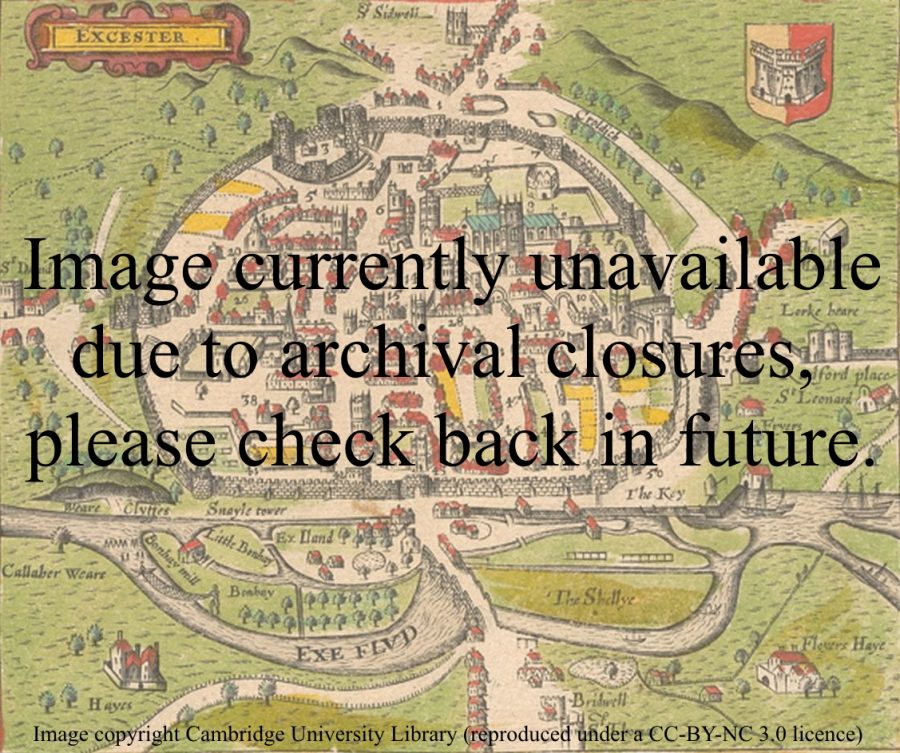 That your petisioner was ever a Loyall subject & served his Majestie King Charles the first, vnder the command of S[i]r Hugh Acland, since which time by a sad accident broke his leg, & had siverall pieces of bone toke out of his ankle, is thereby vnable to goe without cruches, and is vncapable of getting his livelyhood to his calling, and hath also a daughter aged 30 yeares, blind occationed by the decease called ye King evill, these two great afflictions hath wholy impoverished your petisioner, in as much as hee is not able to array himselfe as his necessarys require.

Wherefore humbly beseechs your Wor[shipfu]lls that you would bestowe on him a Gound & shirt this season, which may succor & defend him against the stormes and cold of this hard-weather, and your petisioner shall as in duty bound ever pray &c

To the Right Worshipful the Mayor of the city of Exeter, the Worshipful the Aldermen his brethren, with the rest of the members of the Common Council of the same city.

The humble petition of Richard Cooke of the parish of St Sidwell’s, weaver.

That your petitioner was ever a loyal subject and served his Majesty King Charles the First under the command of Sir Hugh Acland. Since which time, by a sad accident broke his leg and had several pieces of bone taken out of his ankle, and thereby unable to go without crutches and is uncapable of getting his livelihood to his calling; and has also a daughter aged 30 years, blind, occasioned by the disease called the king’s evil. These two great afflictions have wholly impoverished your petitioner, in as much as he is not able to array himself as his necessaries require.

Wherefore, he humbly beseeches your Worshipfuls that you would bestow on him a gown and shirt this season, which may succour and defend him against the storms and cold of this hard weather. And your petitioner shall, as in duty bound, ever pray etc.

ECA, Miscellaneous petitions to the Chamber for relief, file 4, item 39.