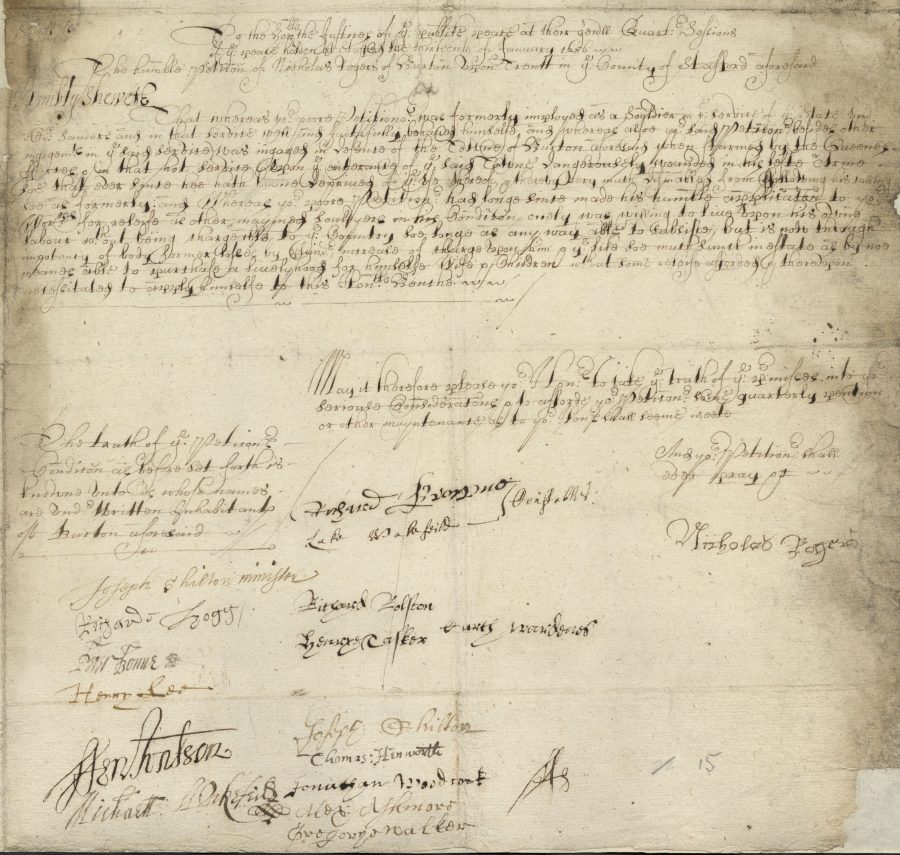 To the hon[oura]ble the Justices of ye publike peace at their gen[era]ll Quart[er] Sessions of ye peace holden at Stafford the thirteenth of January 1656.

The humble petic[i]on of Nicholas Rogers of Burton upon Trentt in ye County of Stafford aforesaid.

That whereas yo[u]r poore Petitionor was formerly imployed as a Souldier in ye service of ye State vnd[e]r Coll[onel] Sanders and in that service well and faithfully behaued himselfe and whereas alsoe yo[u]r said Petic[i]on[e]r besides other ingagem[en]ts in ye said service was ingaged in defence of the Towne of Burton aforesaid when stormed by the Queenes Forces, & in that hot service vpon ye enterance of ye said Towne dangerously wounded in his left Arme soe that ever since hee hath beene depriued of ye vse thereof, & thereby very much disinabled from Following his calling soe as formerly: and Whereas yo[u]r poore Peitcion[e]r had longe since made his humble applicat[i]on to yo[u]r Wor[shi]ps for releife as other maymed souldyers in his Condic[i]on, onely was willing to liue vpon his owne labour w[i]thout being chargeable to ye Country soe longe as any way able to subsiste, but is now through impotency of body former losses by Plund[e]r, increase of charge vpon him & ye like soe much sunck in estate as by noe meanes able to purchase a liuelyhood for himselfe Wife & Children w[i]thout some releife afforded & therevpon necessitated to apply himselfe to this Hon[oura]ble Benche.

<The truth of ye Petic[i]on[e]rs Condic[i]on as before set forth is knowne vnto vs whose names are vnd[e]rwritten Inhabitants of Burton aforesaid.>

To the Honourable the Justices of the public Peace at their General Quarter Sessions of the Peace held at Stafford the thirteenth of January 1657.

The humble petition of Nicholas Rogers of Burton upon Trent in the county of Stafford aforesaid.

That whereas your poor petitioner was formerly employed as a soldier in the service of the State under Colonel Sanders, and in that service well and faithfully behaved himself. And whereas also your said petitioner, besides other engagements in the said service, was engaged in defence of the town of Burton aforesaid when stormed by the Queen’s forces. And in that hot service upon the entrance of the said town, was dangerously wounded in his left arm, so that ever since he has been deprived of the thereof and thereby very much disabled from following his calling so as formerly. And whereas your poor petitioner had long since made his humble application to your Worships for relief as other maimed soldiers in his condition, only he was willing to live upon his own labour without being chargeable to the country so long as any way able to subsist. But he is now through impotency of body, former losses by plunder, increase of charge upon him and the like, so much sunk in estate as by no means able to purchase a livelihood for himself, wife and children without some relief afforded, and thereupon necessitated to apply himself to this Honourable Bench.

May it therefore please your Honours to take the truth of the premises into your serious consideration and to afford your petitioner some quarterly pension or other maintenance as to your Honours shall seem mete.

<The truth of the petitioner’s condition as before set forth is known unto us whose names are underwritten, inhabitants of Burton aforesaid.>