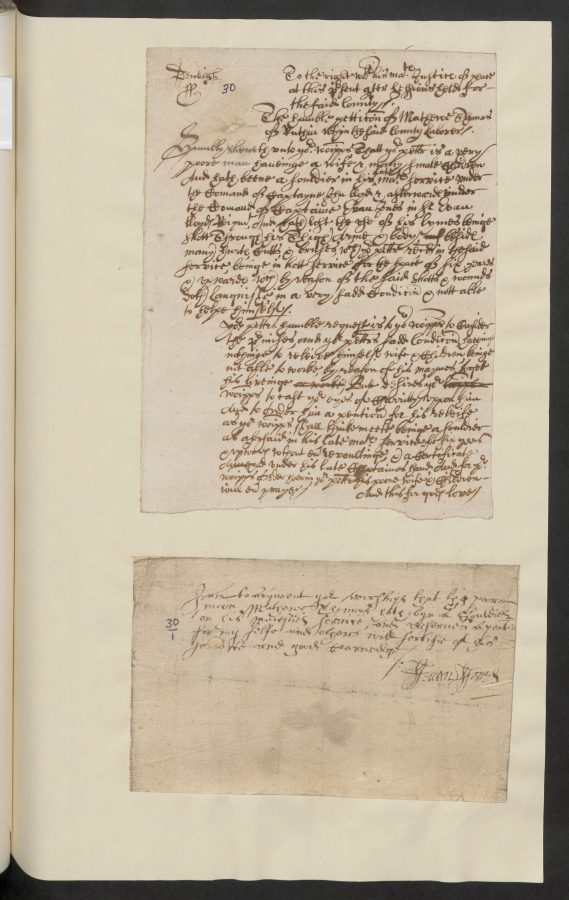 The humble pettic[i]on of Mathewe Thomas of Ruthin w[i]thin the said County laborer.

Humbly sheweth vnto yo[u]r wor[shi]pps, Thatt yo[u]r pett[itione]r is a very poore man haueinge a wife & many smale Children And hath beene a souldier in his late Ma[jesty]s service vnder the Comand of Captayne John lloyd & afterwoords vnder the Comand of Captaine Evan Jones in S[i]r Evan lloyds Reigm[en]t, And hath lost the vse of his lymes beinge shott Through his Thigh, Arme & body, ins besids many hurts, Cutts & bruses, w[hi]ch yo[u]r pett[itione]r rec[eieve]d in the said service, beinge in hott service for the space of six yeares & vpwards w[hi]ch by reason of the said shotts & wounds doth languishe in a very sadd Condic[i]on & nott able to helpe himself.

And this for gods love.

I am to acquaint yo[u]r worshops that this poore man, Mathewe Thomas, hath byn a Souldier on his maiesties service, and deserues a pention for my selfe and others will sertifie of his se{r}vice and good Caraadge.

To the Right Worshipful his Majesty’s Justice of Peace at his present Quarter Sessions held for the said county.

The humble petition of Mathewe Thomas of Ruthin within the said county, labourer.

Humbly shows unto your Worships that your petitioner is a very poor man, having a wife and many small children, and has been a soldier in his late Majesty’s service under the command of Captain John Lloyd and afterwards under the command of Captain Evan Jones in Sir Evan Lloyds’ regiment. And has lost the use of his limbs, being shot through his thigh, arm and body, ins besides many hurts, cuts and bruises, which your petitioner received in the said service, being in hot service for the space of six years and upwards. Which, by reason of the said shots and wounds, does languish in a very sad condition and not able to help himself.

Your petitioner’s humble request is to your Worships to consider the premises and your petitioner’s sad condition, having nothing to relieve himself, wife, and children, being not able to work by reason of his maims to get his living or work. But desires your Lordships Worships to cast your eyes of charity upon him, and to order him a pension for his relief as your Worships shall think meet, being a soldier as aforesaid in his late Majesty’s service for six years and upwards without ever revolting, and a Certificate annexed under his late captain’s hand. And, for your Worships’ order herein, your petitioner, his wife, and children will ever pray etc.

And this for God’s love.

I am to acquaint your Worships that this poor man, Mathewe Thomas, has been a soldier on his Majesty’s service and deserves a pension, for myself and others will certify of his service and good carriage.