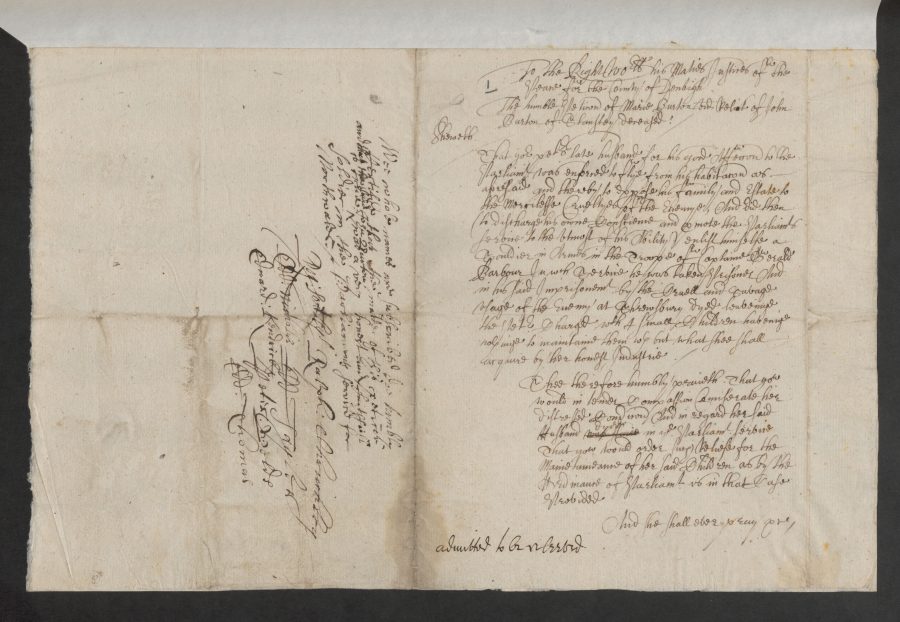 To the Right Wor[shipfu]ll his Ma[jes]ties Justices of the Peace for the County of Denbigh.

That yo[u]r pet[itione]rs late husband for his good Affecc[i]on to the Parliam[en]t was enforced to flye from his habitac[i]on as aforesaid and thereby to expose his family and Estate to the Mercilesse Crueltyes of the Enemye, And did then (to discharge his owne Conscience and p[ro]mote the Parliam[en]ts service to the vtmost of his Ability) enlist himselfe a Souldier in Armes in the Troope of Captaine Gerald Barbour In w[hi]ch Service he was taken Prisoner And in his said Imprisonm[en]t by the Cruell and Savage vsage of the Enemy at Shrewsbury dyed leaveinge the Pet[itione]r Charged w[i]th 4 small Children haveinge nothinge to maintaine them w[i]th but what shee shall acquire by her honest Industrie.

And shee shall ever pray &c.

<Wee whose names are subscribed doe humbly Certifie that the matter of this petic[i]on is true: and that the said john Burton was a very honest and faithfull soldier in the Parliaments service for North wales.

To the Right Worshipful his Majesties’ Justices of the Peace for the county of Denbigh.

That your petitioner’s late husband for his good affection to the parliament was enforced to fly from his habitation as aforesaid and thereby to expose his family and estate to the merciless cruelties of the enemy. And did then (to discharge his own conscience and promote the parliament’s service to the utmost of his ability) enlist himself a soldier in arms in the troop of Captain Gerald Barbour. In which service, he was taken prisoner. And in his said imprisonment, by the cruel and savage usage of the enemy at Shrewsbury, died, leaving the petitioner charged with 4 small children, having nothing to maintain them with but what she shall acquire by her honest industry.

She therefore humbly prays that you would in tender compassion commiserate her distressed condition and, in regard her said husband was slain died in the parliament’s service, that you would order such relief for the maintenance of her said children as by the ordinance of parliament is in that case provided.

And she shall every pray etc.

Admitted to be relieved.

<We whose names are subscribed do humbly certify that the matter of this petition is true and that the said John Burton was a very honest and faithful soldier in the parliament’s service for North Wales.>