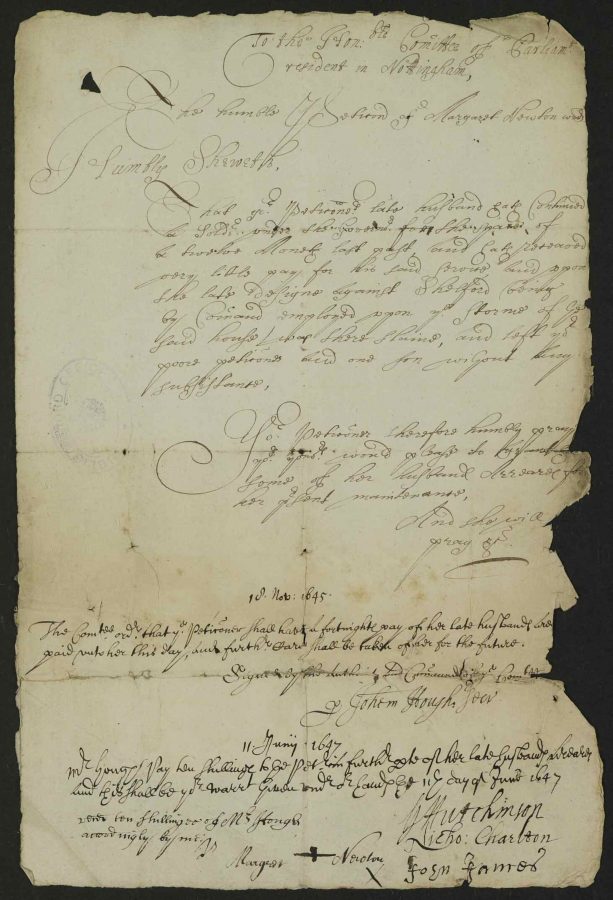 That yo[u]r Petic[i]oners late husband hath Continued a Soldi[e]r vnder the Governor for the space of a twelve Moneth last past, and hath receaved very little pay for his said service, and vpon the late designe against Shelford (beinge by Com[m]and employed vpon ye Storme of ye said house) was there slaine, and left yo[u]r poore petic[i]oner and one son without any subsistance,

And she will pray &c.

The Com[mit]tee ord[e]rs that ye Petic[i]oner shall have a fortnights pay of her late husbands ar{rears} paid vnto her this day, and furth[e]r Care shall be taken of her for the future.

To the Honourable Committee of Parliament resident in Nottingham.

That your petitioner’s late husband has continued a soldier under the Governor for the space of a twelve month last past and has received very little pay for his said service. And upon the late design against Shelford (being by command employed upon the storm of the said house), was there slain and left your poor petitioner and one son without any subsistence.

Your petitioner therefore humbly prays your Honours would be pleased to grant her some of her husband’s arrears for her present maintenance.

And she will pray etc.

The Committee orders that the petitioner shall have a fortnight’s pay of her late husband’s arrears paid unto her this day, and further care shall be taken of her for the future.

Signed by the authority and command of the Committee,

Mr Hough, pay ten shillings to the petitioner in further payment of her late husband’s arrears, and this shall be your warrant. Given under our hands, the 11th day of June 1647.

Received ten shillings of Mr Hough accordingly by me,