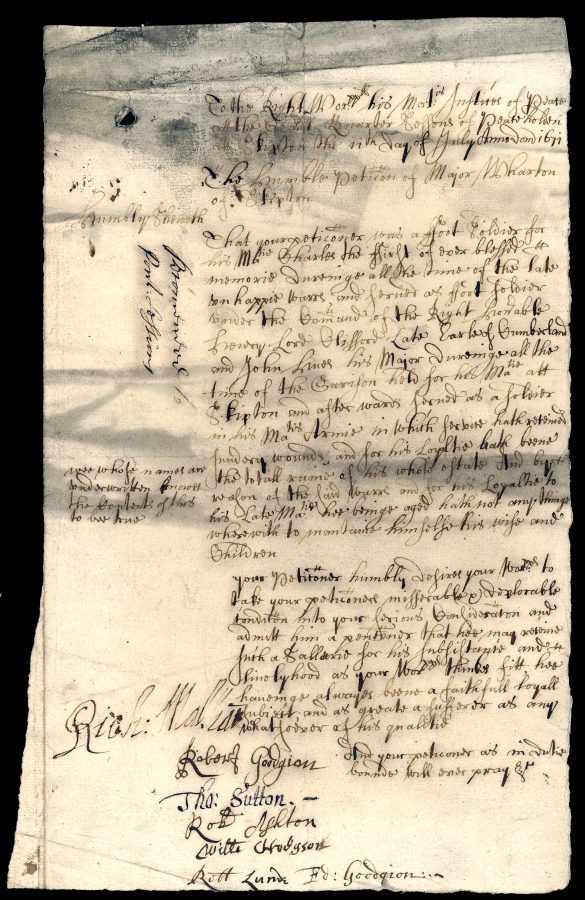 To the Right Wor[shi]pp[fu]ll his Ma[jes]ties Justices of Peace at the General Quarter Sessions of Peace holden at Skipton, the 11th day of July Anno dom[ini] 1671

The humble Petic[i]on of Major Wharton of Skipton

That your petic[i]oner was a Foot Soldier for his Ma[jes]tie Charles the First of ever blessed memorie dureinge all the time of the late vnhappie wars; and serued as Foot soldier vnder the Com[m]and of the Right Hon[our]able Henry Lord Clifford Late Earle of Cumberland and John Hues his Major dureinge all the time of the Garrison held for his Ma[jes]tie att Skipton and after wards serued as a soldier in his Ma[jes]ties Armie in which service hath receiued sundery wounds, and for his Loyaltie hath been the totall ruine of his whole estate And by reason of the said warrs and for his Loyaltie to his Late Ma[jes]tie hee beinge aged hath not anythinge wherewith to maintaine himselfe his wife and Children

your Petic[i]oner humbly desires your Wor[shi]pps to take your petic[i]oners misserable & deplorable condic[i]on into your serious Considerac[i]on and admitt him a penc[i]oner that hee may receiue such a Sallarie for his subsistance and liuelyhood as your Wor[shi]pps thinke fitt, hee haueinge alwayes been a faithfull loyall subiect, and as greate a sufferer as any whatsoever of his qualitie

And your petitioner as in dutie bounde will ever pray &c

To the Right Worshipful his Majesty’s Justices of Peace at the General Quarter Sessions of Peace holden at Skipton, the 11th day of July Anno Domini 1671.

The humble petition of Major Wharton of Skipton.

That your petitioner was a foot soldier for his Majesty Charles the First of ever blessed memory during all the time of the late unhappy wars, and served as foot soldier under the command of the Right Honourable Henry, Lord Clifford, late Earl of Cumberland, and John Hewes, his major, during all the time of the garrison held for his Majesty at Skipton and afterwards served as a soldier in his Majesty’s army. In which service, has received sundry wounds and for his loyalty has been the total ruin of his whole estate. And by reason of the said wars and for his loyalty to his late Majesty, he being aged, has not anything wherewith to maintain himself, his wife and children.

Your petitioner humbly desires your Worships to take your petitioner’s miserable and deplorable condition into your serious consideration and admit him a pensioner, that he may receive such a salary for his subsistence and livelihood as your Worships think fit, he having always been a faithful, loyal subject and as great a sufferer as any whatsoever of his quality.

And your petitioner, as in duty bound, will ever pray etc.

<We whose names are underwritten know the contents of this to be true.>