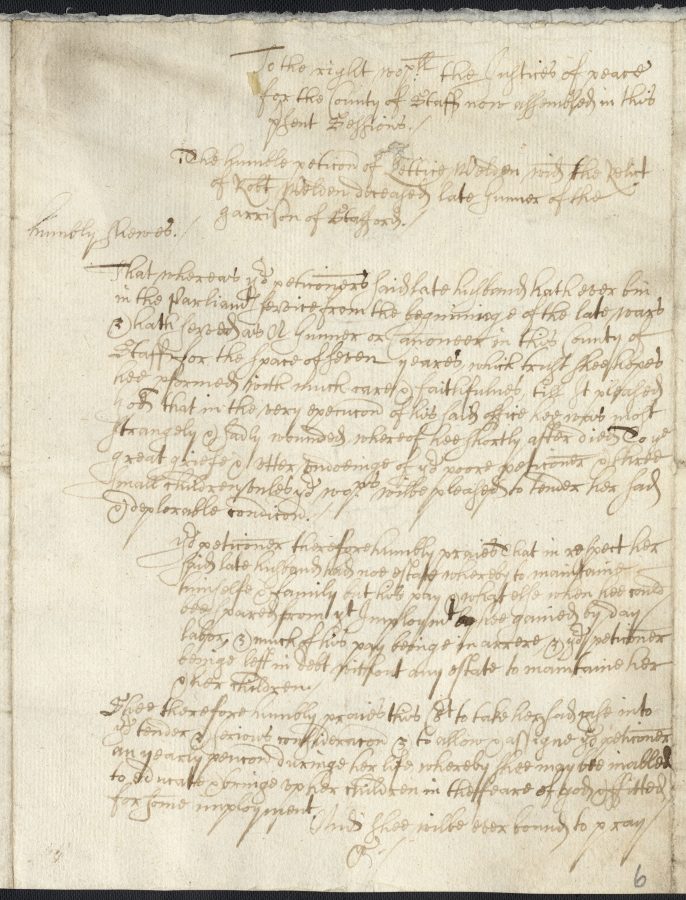 To the right wo[shi]p[fu]ll the Justices of peace for the County of Staff[ord] now assembled in this p[re]sent Sessions.

The humble petic[i]on of Lettice Welden wid[ow] the Relict of Rob[er]t Welden deceased late Gunner of the garrison of Stafford.

That whereas yo[u]r petic[i]oners said late husband hath ever bin in the Parliam[en]ts service from the beginninge of the late wars & hath served as A Gunner or Can[n]oneer in this County of Staff[ord] for the space of seven yeares, which trust shee hopes hee p[er]formed with much care & faithfulnes, till It pleased God that in the very execuc[i]on of his said office hee was most strangely & sadly wounded, whereof hee shortly after died, to ye great griefe & vtter vndoeinge of yo[u]r poore petic[i]oner & three small children unles yo[u]r wo[rshi]ps wil be pleased to tender her sad & deplorable condic[i]on.

Yo[u]r petic[i]oner therefore humbly praies that in respect her said late husband had noe estate whereby to maintaine himselfe & family but his pay & what else when hee could bee spared from yt Imploym[en]t by hee gained by day labo[u]r, & much of his pay beinge in arrere, & yo[u]r petic[i]oner beinge left in debt without any estate to maintaine her & her children.

Shee therefore humbly praies this C[our]t to take her sad case into yo[u]r tender & serious considerac[i]on & to allow & assigne yo[u]r petic[i]oner an yearly penc[i]on duringe her life, whereby shee may bee inabled to educate & bringe vp her children in the feare of God & fitted for some imployment.

And shee wil be ever bound to pray &c.

To the Right Worshipful the Justices of Peace for the county of Stafford now assembled in this present Sessions.

The humble petition of Lettice Welden, widow, the relict of Robert Welden, deceased, late gunner of the garrison of Stafford.

That whereas your petitioner’s said late husband has ever been in the Parliament’s service from the beginning of the late wars and has served as a gunner or cannoneer in this county of Stafford for the space of seven years; which trust she hopes he performed with much care and faithfulness ‘til it pleased God that in the very execution of his said office he was most strangely and sadly wounded, whereof he shortly after died, to the great grief and utter undoing of your poor petitioner and three small children, unless your Worships will be pleased to tender her sad and deplorable condition.

Your petitioner therefore humbly prays that in respect her said late husband had no estate whereby to maintain himself and family but his pay and what else when he could be spared from that employment by he gained by day labour, and much of his pay being in arrears, and your petitioner being left in debt without any estate to maintain her and her children.

She therefore humbly prays this court to take her sad case into your tender and serious consideration and to allow and assign your petitioner a yearly pension during her life, whereby she may be enabled to educate and bring up her children in the fear of God and fitted for some employment.

And she will be ever bound to pray etc.