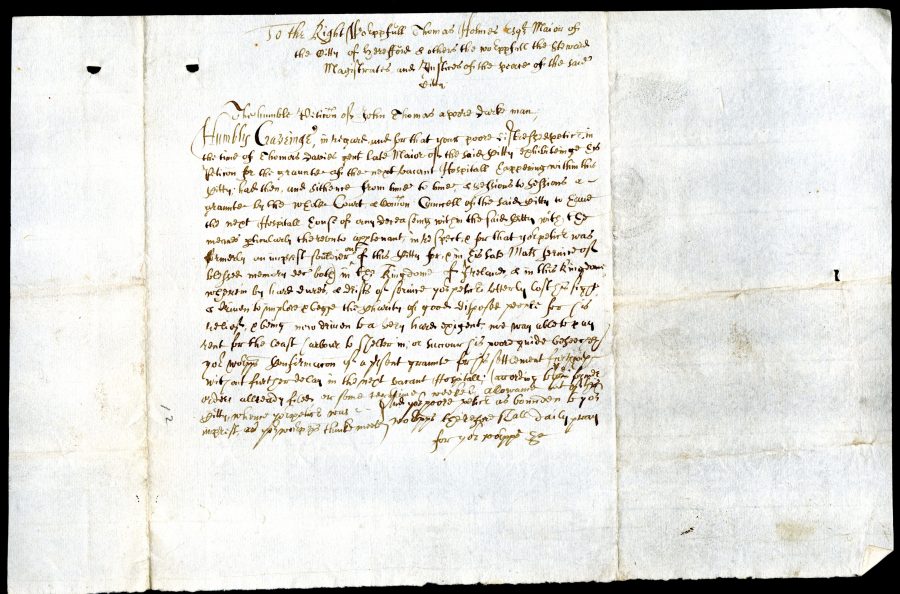 To the Right Wor[shi]ppfull Thomas Holmes Esq[ui]r[e] Maior of the Citty of Herefford & others the w[o]r[shi]ppfull the Steward Magistrates and Justices of the peace of the said Citty;

The humble Petic[i]on of John Thomas a poore darke man;

Humbly Craveinge, in regard and for that your poore distressed petic[ione]r in the time of Thomas Davies gent[leman] late Maior of the said Citty exhibiteinge his Petic[i]on for the graunte of the next vacant Hospitall happening within this Citty; had then, and sithence from time to time, & sessions to sessions a graunte by the whole Court & Com[m]on Councell of the said Citty to haue the next Hospitall house of any deceaseing within the said Citty with the meanes p[ar]ticularly therevnto app[ur]tenant, in respect & for that yo[u]r petic[ione]r was formerly an imprest souldier out of this Citty for & in his late Ma[jes]t[y]s seruice of blessed memory dec[eased] both in the kingdome of Ireland, & in this kingdome wherein by hard dures & drifts of seruice yo[u]r petic[ione]r vtterly lost his sight & driven to implore & begge the Charity of good disposed people for his relief, & being now driuen to a very hard exigent, noe way able to pay rent for the least harbour to shelter in; or succour his poore guide beseecheth yo[u]r wor[shi]pps Confirmac[i]on of a present graunte for his settlement forthwith without further delay in the next vacant Hospitall; (according to their former orders already filed or some certaine weekely allowance out of this Citty, whence yo[u]r petic[ione]r was imprest, as yo[u]r wor[shi]pps thinke meete.)

To the Right Worshipful Thomas Holmes Esquire, Mayor of the city of Hereford, and others the Worshipful the Steward, Magistrates and Justices of the Peace of the said city.

The humble petition of John Thomas, a poor dark man.

Humbly craving, in regard and for that your poor distressed petitioner in the time of Thomas Davies Gentleman, late Mayor of the said City, exhibiting his petition for the grant of the next vacant hospital happening within this city, had then and since, from time to time and sessions to sessions, a grant by the whole Court and Common Council of the said city, to have the next hospital house of any deceasing within the said city, with the means particularly thereunto appurtenant, in respect for that your petitioner was formerly an impressed soldier out of this city, for and in his late Majesty’s service of blessed memory deceased, both in the kingdom of Ireland and in this kingdom. Wherein, by hard duress and drifts of service, your petitioner utterly lost his sight and driven to implore and beg the charity of good disposed people for his relief. And being now driven to a very hard exigent, no way able to pay rent for the least harbour to shelter in or succour his poor guide, beseeches your Worships’ confirmation of a present grant for his settlement forthwith, without further delay, in the next vacant hospital (according to their former orders already filed or some certain weekly allowance out of this city, whence your petitioner was impressed, as your Worships think mete.)