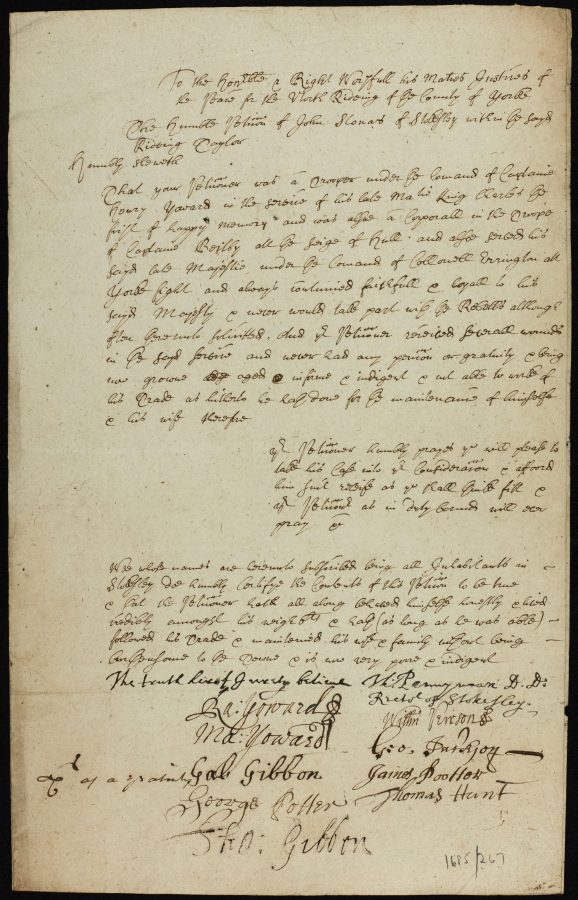 That your Petic[i]oner was a Trooper under the Comand of Captaine Henry Yoward in the service of his late Ma[jes]tie King Charles the first of happy memory and was alsoe a Corporall in the Troope of Captaine Beilby att the siege of Hull and alsoe served his sayd late Majestie under the Com[m]and of Collonell Errington att Yorke fight and always continued faithfull & loyall to his sayd Majesty & never would take part with the Rebells although often thereunto solicitted. And your Petic[i]oner received severall wounds in the said service and never had any penc[i]on or gratuity & being now growne aged & infirme & indigent & not able to worke of his Trade as hitherto he hath done for the maintenance of himselfe & his wife therefore

Wee whose names are hereunto subscribed being all Inhabitants in Stokesley doe humbly Certifye the Contents of this petic[i]on to be true & that the Petic[i]oner hath all along behaved himselfe honestly & lived credibly amongst his neighb[ou]rs & hath (as long as he was able) followed his Trade & maintained his wife & family without being burthensome to the Towne & is now very poore & indigent.

The truth hereof I verily believe

x s. as a gratuity

To the Honourable and Right Worshipful his Majesty’s Justices of the Peace for the North Riding of the County of York.

The humble petition of John Slonas of Stokesley within the said Riding, tailor.

That your petitioner was a trooper under the command of Captain Henry Yoward in the service of his late Majesty King Charles the First of happy memory, and was also a Corporal in the troop of Captain Beilby at the siege of Hull. He also served his said late Majesty under the command of Colonel Errington at York fight, and always continued faithful and loyal to his said Majesty and never would take part with the rebels, although often thereunto solicited. And your petitioner received several wounds in the said service and never had any pension or gratuity. He is now grown aged, infirm, and indigent, and not able to work of his trade as hitherto he has done for the maintenance of himself and his wife. Therefore, your petitioner humbly prays you will please to take his case into your consideration and afford him such relief as you shall think fit. And your petitioner, as in duty bound, will ever pray etc.

We whose names are hereunto subscribed, being all inhabitants in Stokesley, do humbly certify the contents of this petition to be true, and that the petitioner has all along behaved himself honestly and lived credibly amongst his neighbours, and has (as long as he was able) followed his trade and maintained his wife and family without being burdensome to the town, and is now very poor and indigent.

The truth hereof I verily believe.