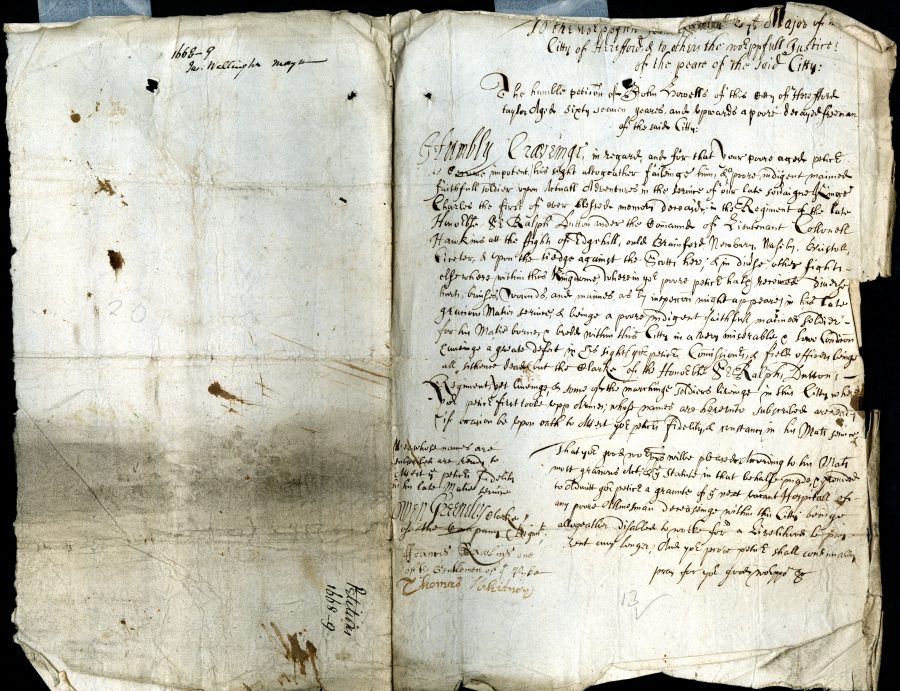 The humble petic[i]on of John Howells of this Citty of Herefford taylor Aged sixty seauen yeares, and vpwards a poore decayed freeman of the said Citty:

Humbly Craveinge, in regard, and for that your poore aged petic[ione]r is become impotent his sight altogeather faileinge him, & a poore indigent maimed faithfull soldier vpon Actuall Adventures in the seruice of our late sou[er]aigne Kinge Charles the first of ever blessed memory deceas’d, in the Regiment of the late Hono[u]r[a]ble S[i]r Ralph Dutton vnder the Com[m]aund of Lieutenant Collonell Hawkins att the Fight of Edgehill, ould Brainford, Newbury, Naseby, Bristoll, Ciceter, & vpon the siedge against the Scotts here; & in div[er]se other fights elsewhere within this Kingdome, wherein yo[u]r poore petic[ione]r hath receiued diuerse hurts, bruises, wounds, and maimes as by inspecc[i]on might appeare in his late gracious Ma[jes]ties seruice, & beinge a poore indigent faithfull maimed soldier for his Ma[jes]tie borne, & bredd within this Citty in a very miserable, & lowe Condic[i]on haueinge a great defect in his sight yo[u]r petic[ione]rs Comission[e]rs, & field officers beinge all sithence dead (but the Clarke of the Hono[u]r[a]ble S[i]r Ralph Duttons Regiment, yet liueinge, & some of the marchinge soldiers liveing in this Citty where yo[u]r petic[ione]r first tooke vpp Armes; whose names are herevnto subscribed are ready (if occasion be upon oath to Attest yo[u]r petic[ione]rs fidelity, & constancy in his Ma[jes]t[y]s seruice.

That yo[u]r good wor[shi]pps wil be pleased According to his Ma[jes]t[y]s most gracious Act; & ye Statute in that behalfe made, & prouided to Admitt yo[u]r petic[ione]r a graunte of ye next vacant Hospitall of any poore Allmesman deceaseinge within this Citty beinge alltogeather disabled to worke for a Livelihood to pay rent any longer; And yo[u]r poore petic[ione]r shall continually pray for your good wor[shi]ps &c

<Francis Rawlins one of the Gentlemen of ye Pyke>

The humble petition of John Howells of this city of Hereford, tailor, aged sixty-seven years and upwards, a poor decayed freeman of the said city.

Humbly craving, in regard and for that your poor aged petitioner is become impotent, his sight altogether failing him; and a poor indigent maimed faithful soldier upon actual adventures in the service of our late sovereign King Charles the First of ever blessed memory, deceased, in the regiment of the late Honourable Sir Ralph Dutton under the command of Lieutenant-Colonel Hawkins, at the fight of Edgehill, Old Brentford, Newbury, Naseby, Bristol, Cirencester and upon the siege against the Scots here, and in divers other fights elsewhere within this kingdom. Wherein, your poor petitioner has received divers hurts, bruises, wounds and maims, as by inspection might appear, in his late gracious Majesty’s service. And being a poor indigent faithful maimed soldier for his Majesty, born and bred within this city, in a very miserable and low condition, having a great defect in his sight. Your petitioner’s commissioners and field officers being all since dead, but the Clerk of the Honourable Sir Ralph Dutton’s Regiment yet living and some of the marching soldiers living in this City where your petitioner first took up arms, whose names are hereunto subscribed, are ready (if occasion be) upon oath to attest your petitioner’s fidelity and constancy in his Majesty’s service.

That your good Worships will be pleased, according to his Majesty’s most gracious Act and the Statute in that behalf made and provided, to admit your petitioner a grant of the next vacant Hospital of any poor almsman deceasing within this city, being altogether disabled to work for a livelihood to pay rent any longer. And your poor petitioner shall continually pray for your good Worships etc.

<We whose names are subscribed are ready to attest the petitioner’s fidelity in his late Majesty’s service.>

<Owen Greenely, Clerk of the company and regiment>

<Francis Rawlins, one of the Gentlemen of the Pike>