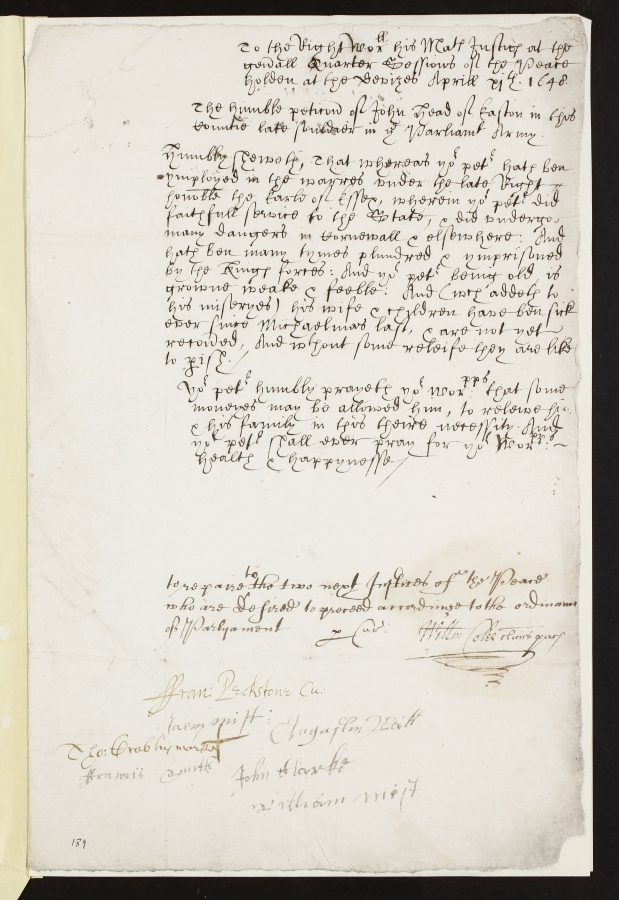 The humble petic[i]on of John Head of Easton in this Countie late souldier in ye Parliam[en]t Army.

Humbly sheweth, That whereas yo[u]r pet[itione]r hath ben ymployed in the warres vnder the late Right hono[ura]ble the Earle of Essex, wherein yo[u]r pet[itione]r did faithfull service to the State, & did vndergo many dangers in Cornewall & elsewhere: And hath ben many tymes plundred & ymprisoned by the kings forces: And yo[u]r pet[itione]r being old, is growne weake & feeble: And (w[hi]ch addeth to his miseryes) his wife & children have ben sick ever since Michaelmas last, & are not yet recou[er]ed, And w[i]thout some releife they are like to p[er]ish.

To the Right Worshipful his Majesty’s Justices at the General Quarter Sessions of the Peace held at Devizes, April 11th, 1648.

The humble petition of John Head of Easton in this county, late soldier in the Parliament’s army.

Humbly shows that whereas your petitioner has been employed in the wars under the late Right Honourable the Earl of Essex, wherein your petitioner did faithful service to the State and did undergo many dangers in Cornwall and elsewhere. And he has been many times plundered and imprisoned by the King’s forces. And your petitioner being old, is grown weak and feeble. And (which adds to his miseries) his wife and children have been sick ever since Michaelmas last and are not yet recovered, and without some relief they are likely to perish.

To repair to the two next Justices of the Peace who are desired to proceed according to the Ordinance of Parliament.

For the court: William Coles, Clerk of the Peace