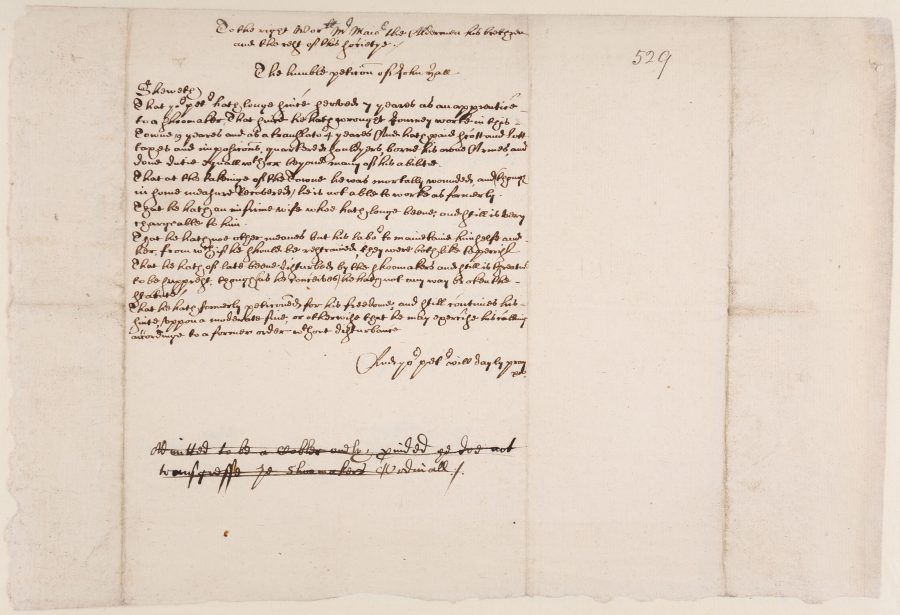 To the right Wor[shipfu]ll Mr Maior the Aldermen his brethren and the rest of this societye.

The humble petic[i]on of John Hall.

That yo[u]r pet[itione]r hath longe since served 7 yeares as an apprentice to a shoomaker, That since he hath wrought Journey worke in this Towne 19 yeares and as a translator 4 yeares And hath paid scott and lott taxes and imposic[i]ons, quartered souldyers, borne his owne Armes, and done dutie equall with or beyond many of his abilitie.

That at the takeinge of the Towne he was mortally wounded, and (though in some measure Recovered) he is not able to worke as formerly.

That he hath an infirme wife whoe hath longe beene, and still is very chargeable to him.

That he hath noe other meanes but his labo[u]r to mainetaine himselfe and her, from w[hi]ch if he should be restrained, they were both like to perrish.

That he hath of late beene disturbed by the shoomakers and still is threatned to be supprest, though (as he conceives) he hath not any way broken the Statute.

That he hath formerly petic[i]oned for his freedome, and still continues his suite, vppon a moderate fine, or otherwise that he may exercise his calling accordinge to a former order w[i]thout disturbance.

To the Right Worshipful Mr Mayor, the Aldermen his brethren and the rest of this Society.

The humble petition of John Hall.

That your petitioner has long since served 7 years as an apprentice to a shoemaker. That since, he has wrought journey work in this town 19 years and as a translator 4 years. And has paid scot and lot taxes, and impositions, quartered soldiers, borne his own arms, and done duty equal with or beyond many of his ability.

That at the taking of the town, he was mortally wounded and (though in some measure recovered) he is not able to work as formerly.

That he has an infirm wife who has long been, and still is, very chargeable to him.

That he has no other means but his labour to maintain himself and her, from which if he should be restrained they were both likely to perish.

That he has of late been disturbed by the Shoemakers and still is threatened to be suppressed, though (as he conceives) he has not any way broken the statute.

That he has formerly petitioned for his freedom, and still continues his suit, upon a moderate fine, or otherwise that he may exercise his calling according to a former order without disturbance.

And your petitioner will daily pray etc.

Admitted to be a cobbler only provided he does not transgress the Shoemakers’ ordinal.