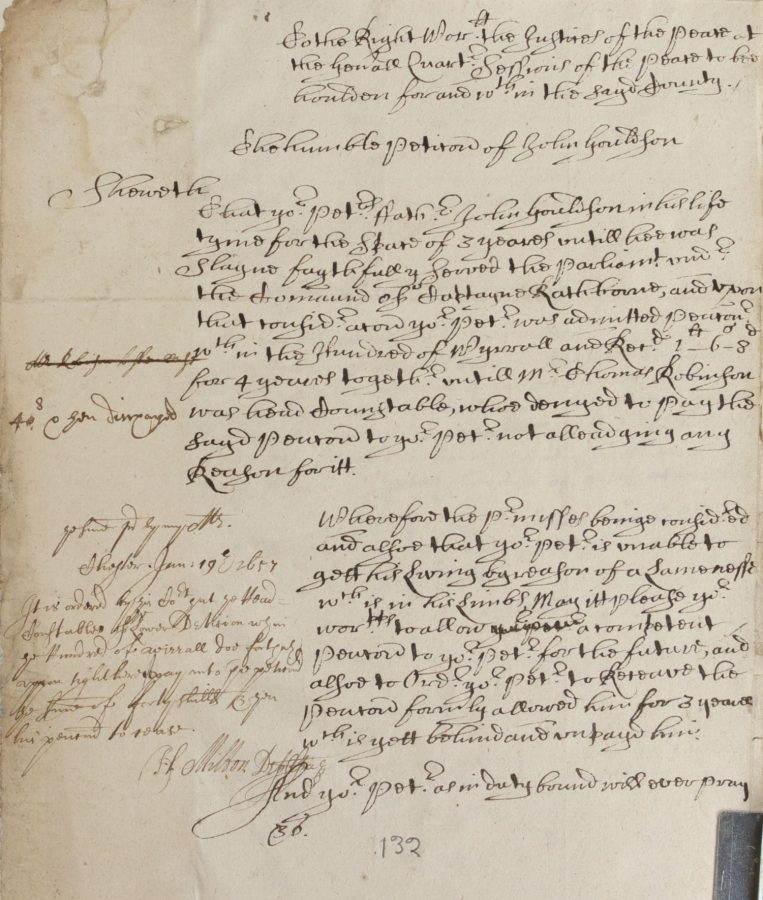 To the Right Wor[shipfu]ll Justices of the Peace at the Gen[er]all Quart[e]r Sessions of the Peace to bee houlden for and w[i]th the sayd County.

<Mr Robinson to shew Cause>

<It is ordered by this Co[u]rt that the Head Constable of the Lower Devision w[i]thin the Hundred of Wirrall doe forthw[i]th vppon sight hereof pay vnto the peticion[e]r the some of forty shill[ing]s & then his penc[i]on to cease.>

To the Right Worshipful Justices of the Peace at the General Quarter Sessions of the Peace to be held for and with the said county.

The humble Petition of John Gouldson.

That your petitioner’s father, John Gouldson, in his lifetime for the space of 3 years until he was slain, faithfully served the Parliament under the command of Captain Rathborne. And upon that consideration, your petitioner was admitted pensioner within the hundred of Wirral and received £1 6 s. 8 d. for 4 years together until Mr Thomas Robinson was Head Constable, who refused to pay the said pension to your petitioner, not alleging any reason for it.

And your petitioner, as in duty bound, will ever pray etc.

<Mr Robinson to show cause>

<The sum paid by my Master.>

<It is ordered by this court that the Head Constable of the lower division within the hundred of Wirral do forthwith upon sight hereof pay unto the petitioner the sum of forty shillings and then his pension to cease.>