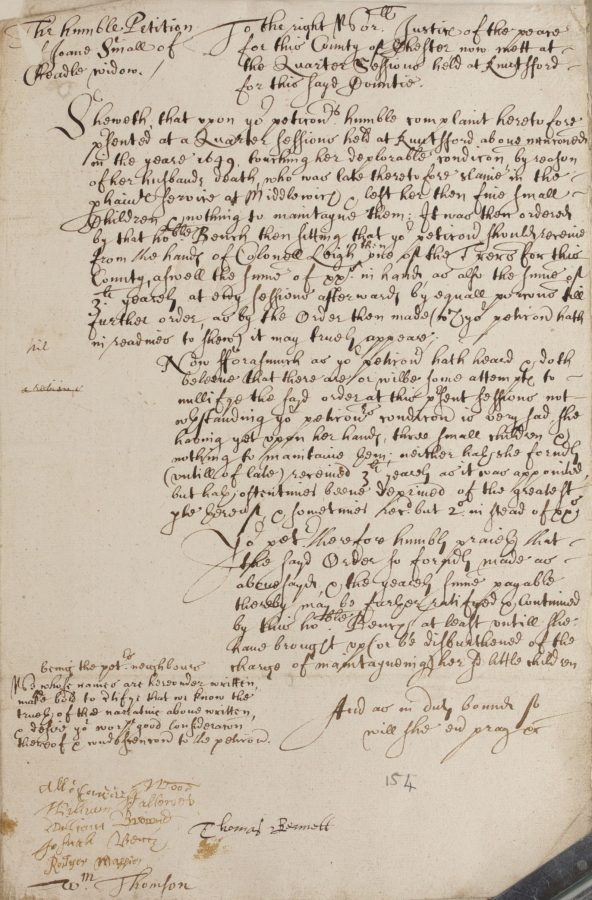 To the right Wor[shipfu]ll Justic[e]s of the peace for this County of Chester now mett at the Quarter Sessions held at Knotsford for this sayd Countie.

Sheweth, that vpon yo[u]r petic[i]on[e]rs humble complaint heretofore pr[e]sented at a Quarter sessions held at Knutsford aboue menc[i]oned in the yeare 1649, touching her deplorable condic[i]on, by reason of her husbands death who was late theretofore slaine in the p[ar]liam[en]ts service of Middlewich & left her then fiue small Children & nothing to maintayne them: It was then ordered by that ho[noura]ble Bench then sitting that yo[u]r petic[i]on[e]r should receiue from the hands of Colonell Leigh then one of the Tre[asur]ers for this County, as well the sume of xx s. in hand as also the sume of 3 li. yearely at eu[er]y sessions afterwards by equall porc[i]ons till further order, as by the Order then made (w[hi]ch yo[u]r petic[i]on[e]r hath in readines to shew) it may truely appeare.

Now Forasmuch as yo[u]r petic[i]on[e]r hath heard & doth beleeue that there are or wil be some attempts to nullifye the sayd order at this pr[e]sent sessions not w[i]thstanding yo[u]r petic[i]on[e]rs condic[i]on is very sad, she having yet vppon her hands, three small children & nothing to maintaine them; neither hath she form[er]ly (vntill of late) receiued 3 li. yearely as it was appointed but hath oftentimes beene depriued of the greatest p[ar]te thereof & sometimes rec[eive]d but 2 s. in stead of xx s.

Yo[u]r pet[itione]r therefore humbly praieth that the sayd Order so form[er]ly made as abouesayd; & the yearely sume payable thereby may be farther ratified & Continued by this ho[noura]ble Bench at least vntill she haue brought vp (or be disburthened of the charge of maintayneing) her s[ai]d little children

To the Right Worshipful Justices of the Peace for this county of Chester now met at the Quarter Sessions held at Knutsford for this said ounty.

<The humble petition of Joane Small of Cheadle, widow.>

Shows that upon your petitioner’s humble complaint heretofore presented at a Quarter Sessions held at Knutsford abovementioned in the year 1649, touching her deplorable condition by reason of her husband’s death (who was late theretofore slain in the Parliament’s service of Middlewich and left her then five small children and nothing to maintain them), it was then ordered by that Honourable Bench then sitting that your petitioner should receive from the hands of Colonel Leigh (then one of the Treasurers for this county) as well the sum of 20 s. in hand as also the sum of £3 yearly at every Sessions afterwards by equal portions ‘til further order, as by the order then made (which your petitioner has in readiness to show) it may truly appear.

Now forasmuch as your petitioner has heard and does believe that there are or will be some attempts to nullify the said order at this present Sessions, notwithstanding your petitioner’s condition is very sad, she having yet upon her hands three small children and nothing to maintain them, neither has she formerly (until of late) received £3 yearly as it was appointed but has oftentimes been deprived of the greatest part thereof and sometimes received but 2 s. instead of 20 s.

Your petitioner therefore humbly prays that the said order so formerly made as abovesaid and the yearly sum payable thereby may be further ratified and continued by this Honourable Bench at least until she has brought up (or be disburdened of the charge of maintaining) her said little children.

And, as in duty bound, so will she ever pray etc.

<Being the petitioner’s neighbours, we whose names are hereunder written make bold to certify that we know the truth of the narrative above-written and desire your Worships’ good consideration thereof and condescension to the petitioner.>