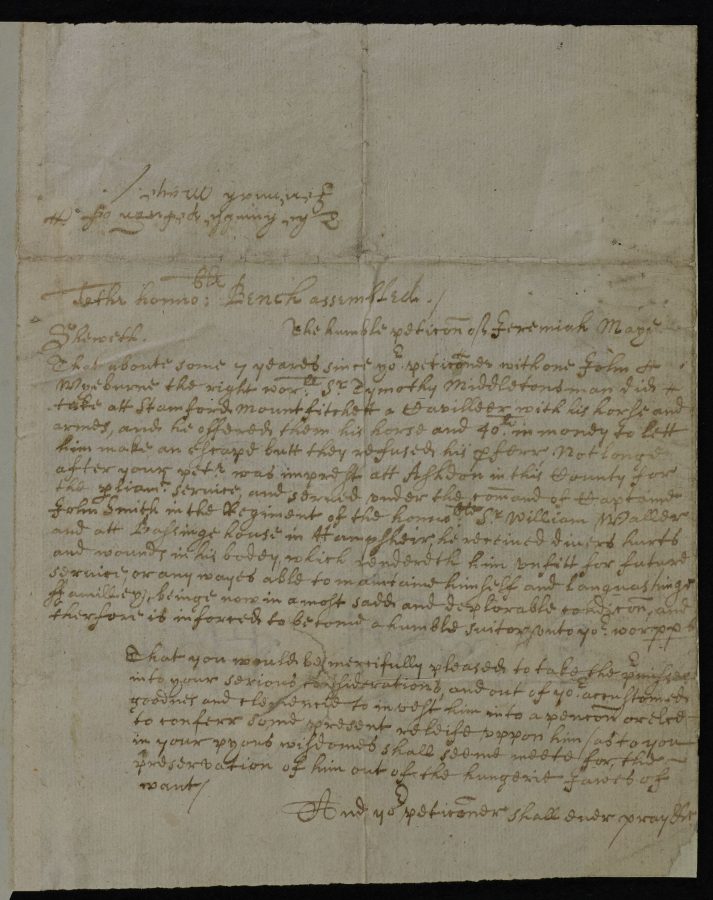 <The humble petic[i]on of Jeremiah Maye>

To the honno[ura]ble Bench assembled.

The humble petic[i]on of Jeremiah Maye

That about some 7 yeares since yo[u]r petic[i]oner with one John Wyeburne the right wor[shipfu]ll S[i]r Tymothy Middletons man did take att Stamford Mountfitchett a Cavilleer with his horse and armes, and he offered them his horse and 40 li. in money to lett him make an escape butt they refused his p[re]ferr, Not longe after you pet[itione]r was imprest at Ashdon in this County for the p[ar]liam[en]t service, and served vnder the com[m]and of Captaine John Smith in the Regiment of the hon[oura]ble S[i]r William Waller and att Basinge house in Hampsheir, he receiued divers hurts and wounds in his bodey, which rendereth him vnfitt for future service, or any wayes able to maintaine himself and languashinge Familley, beinge now in a most sadd and deplorable condic[i]on, and therefore is inforced to become a humble suitor vnto yo[u]r wor[shi]pps.

That you would be mercifully pleased to take the pr[e]mises into your serious considerations, and out of yo[u]r accustomed goodnes and the mercie to invest him into a penc[i]on or else to conferr some present releife uppon him as to you in your pyous wisdomes shall seeme meete for the preservation of him out of the hungerie Jawes of want.

<The humble petition of Jeremiah Maye>

To the Honourable Bench assembled.

The humble petition of Jeremiah Maye.

That about some seven years since your petitioner with one John Wyeburne, the Right Worshipful Sir Timothy Middleton’s man, did take at Stansted Mountfitchet a Cavalier with his horse and arms, and he offered them his horse and £40 in money to let him make an escape but they refused his prefer. Not long after, your petitioner was impressed at Ashdon in this county for the Parliament’s service, and served under the command of Captain John Smith in the regiment of the Honourable Sir William Waller. And at Basing House in Hampshire, he received divers hurts and wounds in his body, which renders him unfit for future service or any ways able to maintain himself and languishing family, being now in a most sad and deplorable condition, and therefore is enforced to become a humble suitor unto your worships.

That you would be mercifully pleased to take the premises into your serious considerations and out of your accustomed goodness and the mercy, to invest him into a pension or else to confer some present relief upon him, as to you in your pious wisdoms shall seem meet for the preservation of him out of the hungry jaws of want.

And your petitioner shall ever pray, etc.