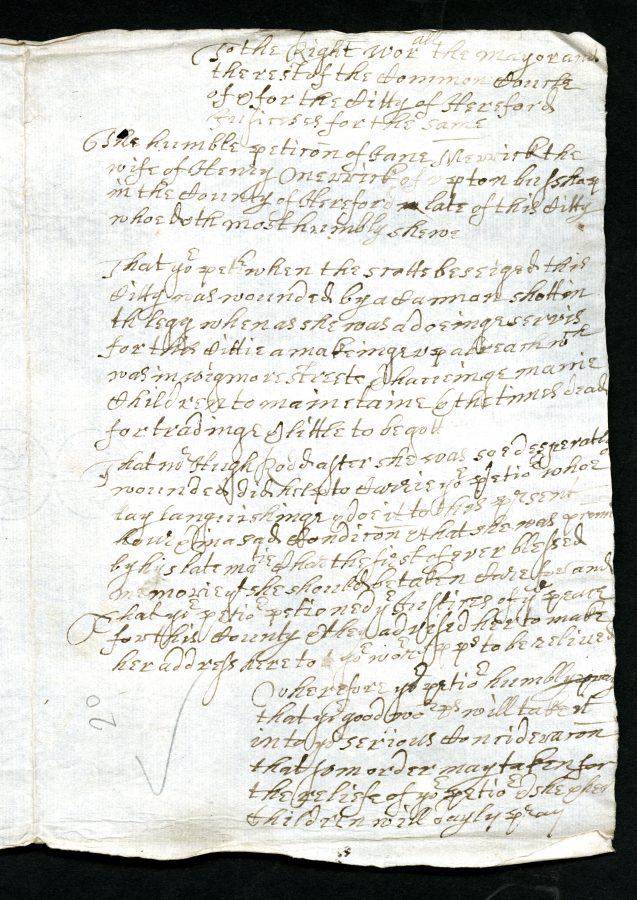 To the Right Wor[shipf]ull the Mayor and the rest of the Common Courte of & for the Citty of Hereford Justices for the same.

To the Right Worshipful the Mayor and the rest of the Common Court of and for the City of Hereford, Justices for the same.

The humble petition of Jane Merrick, the wife of Henry Merrick of Upton Bishop in the County of Hereford, in late of this City, who does most humbly show:

That your petitioner when the Scots besieged this city was wounded by a cannon shot in the leg when as she was a-doing service for this city a-making up a breach which was in Wigmore Street, and having many children to maintain, and the times dead for trading and little to be got.

That Mr Hugh Rodd, after she was so desperately wounded, did help to carry your petitioner, who lay languishing and do it to this present hour and in a sad condition. And that she was promised by his late Majesty Charles the First of ever blessed memory that she should be taken care of, and that your petitioner petitioned the Justices of the Peace for this county and they advised her to make her address here to your Worships to be relieved.

Wherefore, your petitioner humbly prays that your good Worships will take it into your serious consideration that some order may be taken for the relief of your petitioner. And she and her children will daily pray.