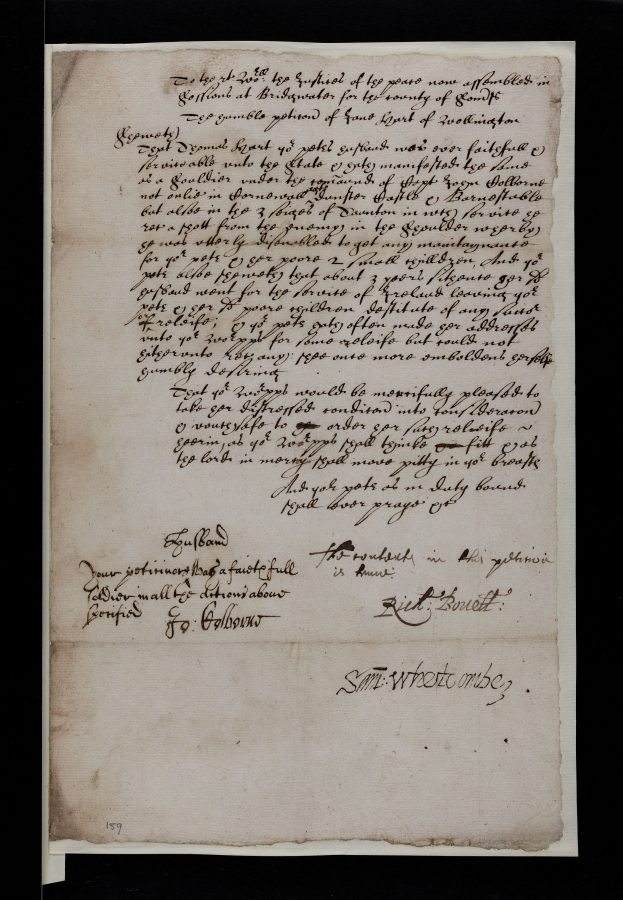 The humble petic[i]on of Jane Hart of Wellington

The contents in this peticion is true:

To the Right Worshipful the Justices of the Peace now assembled in Sessions at Bridgwater for the county of Somerset.

The humble petition of Jane Hart of Wellington.

That Thomas Hart, your petitioner’s husband, was ever faithful and serviceable unto the State; and has manifested the same as a soldier under the command of Captain John Colborne not only in Cornwall, against Dunster Castle and Barnstaple, but also in the 3 sieges of Taunton. In which service, he received a shot from the enemy in the shoulder, whereby he was utterly disabled to get any maintenance for your petitioner and her poor 2 small children. And your petitioner also shows that about 3 years since, her said husband went for the service of Ireland, leaving your petitioner and her said poor children destitute of any succour or relief. And your petitioner has often made her addresses unto your Worships for some relief but could not hitherto receive any. She once more emboldens herself, humbly desiring:

That your Worships would be mercifully pleased to take her distressed condition into consideration and vouchsafe to he order her such relief herein as your Worships shall think fit and as the Lord in mercy shall move pity in your breasts.

And your petitioner, as in duty bound, shall ever pray etc.

The contents in this petition are true.

<Your petitioner’s husband was a faithful soldier in all the actions above specified.>

Hart denied; nothing ‘til further examination; xii d. per week by the parish, unless cause to the contrary shown.