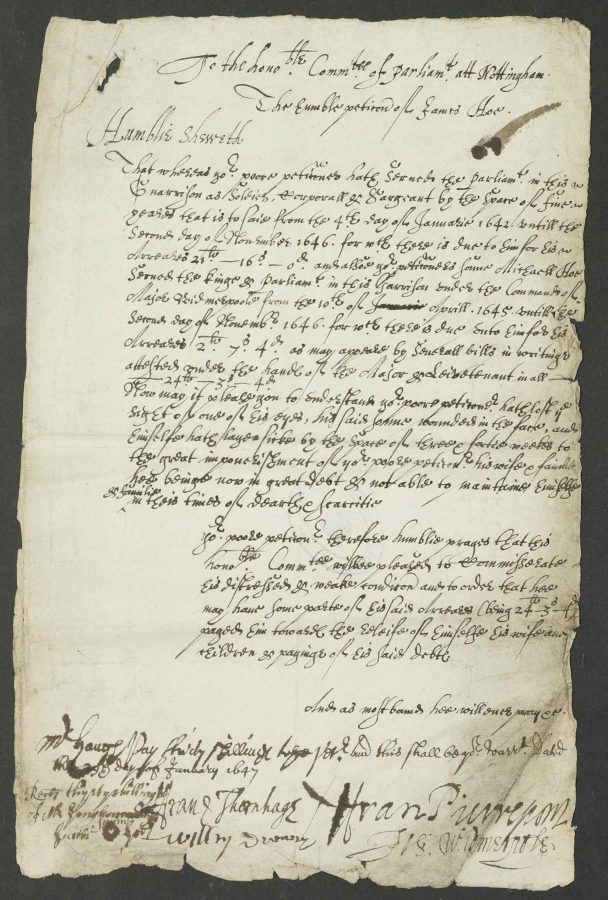 The humble petic[i]on of James Hoe.

That whereas yo[u]r poore petic[i]oner hath serued the Parliam[en]t in this Guarrison as Soldier, Corporall & Sargeant by the space of fiue yeares, that is to saie from the 4th day of Januarie 1642. vntill the Second day of November 1646. for w[hi]ch there is due to him for his Arreares 21 li. – 16 s. – 0 d. and alsoe yo[u]r petic[i]oners sonne Michael Hoe Serued the kinge & Parliam[en]t in this Garrison vnder the Command of Major Widmerpoole from the 10th of Januarie Aprill. 1645. vntill the second day of Novemb[e]r 1646. for w[hi]ch there is due vnto him for his Arreares 2 li. – 7 s. – 4 d. as may appeare by seuerall bills in writinge attested vnder the hands of the Major & Leivetenant in all – 24 li. – 3 s. – 4 d.

Now may it please you to vnderstand yo[u]r poore petic[i]oner hath lost ye sight of one of his eyes, his said sonne wounded in the face, and himselfe hath layen sicke by the space of three & fortie weekes to the great impouerishment of your poore petic[i]oner his wife & familie hee beinge now in great debt & not able to maintaine himselfe & family in theis times of dearth & scarcitie

Yo[u]r poore peticon[e]r therefore humblie prayes that this hono[urab]le Comm[it]tee wilbee pleased to Commisserate his distressed & weake condic[i]on and to order that hee may haue some parte of his said Arreares (being 24 li. – 3 s. – 4 d.) payed him towards the releife of himselfe his wife and children & payinge of his said debts.

And as most bound hee will euer pray &c.

Mr Hough Pay thirty shillings to ye Pet[itione]r and this shall be yo[u]r warr[an]t. Dated the 29th day of January 1647

The humble petition of James Hoe.

Now may it please you to understand your poor petitioner has lost the sight of one of his eyes, his said son wounded in the face, and himself has lain sick by the space of three and forty weeks to the great impoverishment of your poor petitioner, his wife and family, he being now in great debt and not able to maintain himself and family in these times of dearth and scarcity.

Your poor petitioner therefore humbly prays that this Honourable Committee will be pleased to commiserate his distressed and weak condition, and to order that he may have some part of his said arrears (being 24 £. – 3 s. – 4 d.) paid towards the relief of himself, his wife and children, and paying of his said debts.

And as most bound, he will ever pray etc.

Mr Hough, pay thirty shillings to the petitioner, and this shall be your warrant. Dated the 29th day of January 1647.