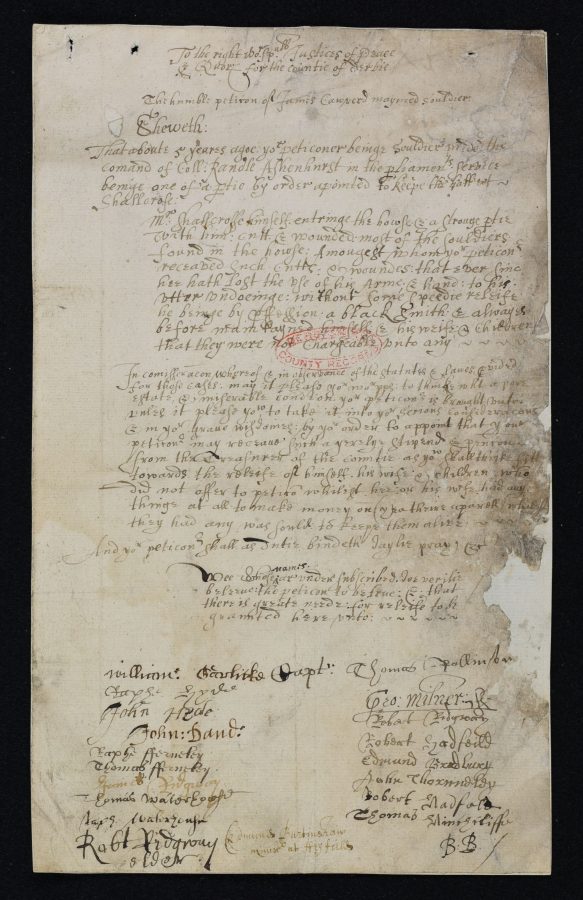 That aboute 5 yeares agoe: yo[u]r peticoner beinge souldier vnder the comand of Col[one]l: Randle Ashenhurst in the p[ar]liaments service beinge one of a p[ar]tie by order apointed to keepe the hall of Shallcrose:

Mr: Shallcrosse himself entringe the howse & a stronge p[ar]tie with him: cutt & wounded most of the souldiers found in the howse: Amongst whom yo[u]r peticoner receaved such cutts: & woundes: that ever sinc [sic.] hee hath lost the vse of his Arme & hand: to his vtter vndoeinge: without some speedie releife he beinge by p[ro]ffession a blacksmith & alwayes before maintayned himself & his weife & Children that they were not Chargeable vnto any.

In comisserac[i]on whereof & in observance of the statutes & lawes p[ro]vided for those cases: may it please yo[u]r Wor[shi]pps to thinke wh[a]t a pore estate & miserable condion yo[u]r peticoner is braught vnto vnles it please yow to take it into yo[u]r serious Consideracons & in yo[u]r graue wisdomes: by yo[u]r order to appoint that your peticon[e]r may receaue such a yerely stipend & penc[i]on from the Treasurer of the Com[m]it[t]ie as yow shall thinke fitt towards the releife of himself his wife & children who did not offer to petico[n] whilest hee or his wife had any thinge at all to make money on (yea theire aparell whilest they had any was sould to keep them alive).

Wee whose names are vnder subscribed doe verilie beleeue the peticon to be true: & that there is greate neede for releife to be granted here vnto.

To the Right Worshipful Justices of Peace and Quorum for the county of Derby.

That about 5 years ago, your petitioner being soldier under the command of Colonel Randle Ashenhurst in the Parliament’s service, being one of a party by order appointed to keep the hall of Shallcross.

Mr Shallcrosse himself entering the house and a strong party with him, cut and wounded most of the soldiers found in the house. Amongst whom, your petitioner received such cuts and wounds that ever since he has lost the use of his arm and hand to his utter undoing without some speedy relief, he being by profession a blacksmith and always before maintained himself and his wife and children that they were not chargeable unto any.

In commiseration whereof and in observance of the statutes and laws provided for those cases, may it please your Worships to think what a poor estate and miserable condition your petitioner is brought unto unless it please you to take it into your serious consideration and in your grave wisdom by your order to appoint that your petitioner may receive such a yearly stipend and pension from the Treasurer of the Committee as you shall think fit towards the relief of himself, his wife and children (who did not offer to petition whilst he or his wife had anything at all to make money on, yes, their apparel whilst they had any was sold to keep them alive).

And your petitioner shall, as duty binds, daily pray etc.

We, whose names are under subscribed, do verily believe the petition to be true and that there is great need for relief to be granted hereunto.