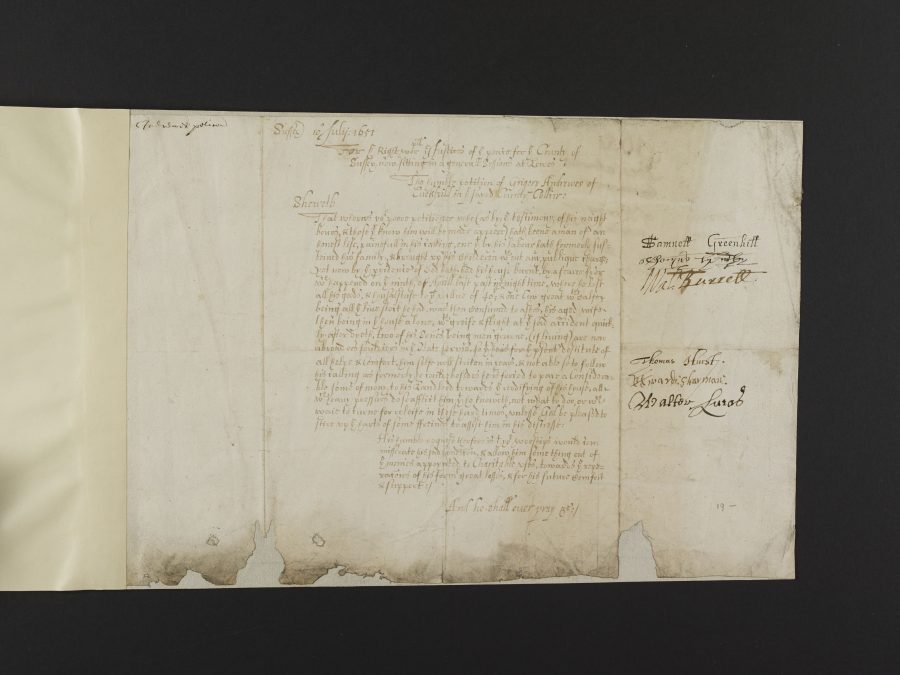 The humble petition of Grigory Andrewes of Cuckfeild in ye sayed County Collier:

That whereas yo[u]r poore petitioner who (as by ye testimony of his neightbours, & those yt know him will be made appiere) hath beene a man of an honest life, painefull in his calling, one yt by his labour hath formerly susteined his family; & brought vp his Children w[i]thout any publique charge; Yet now by ye p[ro]vidence of God hath had his house burnt, by a fearce fyrer w[hi]ch happened on ye ninth of Aprill last past in ye night time, where he lost all his goods, & housaltstufe to ye vallue of 40 li; & one Cow great w[i]th Calfe, being all ye live stock he had, was then Consumed to ashes, his aged wife then being in ye house alone, w[i]th greife & flight at yt sad accident quickly after dyeth, two of his Son[n]es being men growne, (if living) are now abroad as souldiers in ye State servis, so yt he is for ye pr[e]sent destitute of all helpe & Comfort, him selfe well striken in years, & not able so to follow his calling as formerly he could; besides he is forced to paye a Considerable some of mony to his Landlord towards ye reedifying of his house, alle w[hi]ch heauy pressures do so afflict him, yt he knoweth not what to doo, or w[hi]ch waie to turne for releife in these hard times, vnlesse God be pleased to stire vp ye harts of some Friends to assist him in his distresse:

His humble request therfore is yt yo[u]r worships would commisserate his sad Condic[i]on, & allow him some thing out of ye monies appoynted to Charitable vses, towards ye reparac[i]ons of his form[e]r great losses, & for his future Comfort & support:

And he shall euer pray &c:

For the Right Worshipful the Justices of the Peace for the county of Sussex now sitting in a General Sessions at Lewes.

The humble petition of Grigory Andrewes of Cuckfield in the said county, collier.

That whereas your poor petitioner, who (as by the testimony of his neighbours and those that know him will be made appear) has been a man of an honest life, painful in his calling, one that by his labour has formerly sustained his family and brought up his children without any public charge. Yet, now by the providence of God, has had his house burnt by a fierce fire, which happened on the ninth of April last past in the night-time. Whereby he lost all his goods and household stuff to the value of £40 li; and one cow great with Calfe, being all the livestock he had, was then Consumed to ashes. His aged wife then being in the house alone, with grief and flight at that sad accident, quickly after died. Two of his sons being grown men (if living) are now abroad as soldiers in the State’s service, so that he is for the present destitute of all help and comfort, himself well stricken in years and not able so to follow his calling as formerly he could; besides, he is forced to pay a considerable sum of money to his landlord towards the reedifying of his house. All which heavy pressures do so afflict him, that he knows not what to do or which way to turn for relief in these hard times, unless God be pleased to stir up the hearts of some friends to assist him in his distress.

His humble request, therefore, is that your Worships would commiserate his sad condition and allow him something out of the monies appointed to charitable uses towards the reparations of his former great losses and for his future comfort and support.

And he shall ever pray etc.