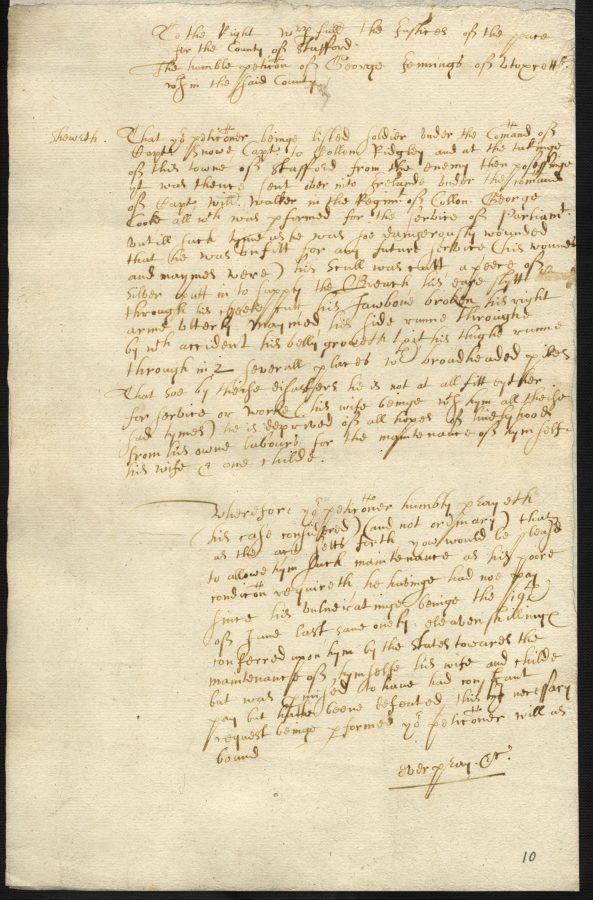 To the Right W[o]r[shi]pfull the Justices of the peace for the County of Stafford.

<Sheweth.> That yo[u]r petic[i]oner beinge listed soldier vnder the Com[m]and of Capt[ain] Snowe, Capt[ain] To Collonel Ridgley and at the takinge of this towne of Stafford from the enemy then posessinge yt was thence sent over into Irelande vnder the com[m]and of Capt[ain] Will[iam] Walker in the Regim[en]t of Collon[el] George Cooke all w[hi]ch was p[er]formed for the service of Parliam[en]t vntill such tyme as he was soe dangerously wounded that he was vnfitt for any future service (his wounds and maymes were) his Scull was cutt, a peece of Silver putt in to supply the Breach, his eare slytt through his cheeke cutt, his Jawbone broken, his right arme vtterly maymed, his side runne throughe by w[hi]ch accident his belly groweth to it, his thighe runne though in 2 severall places w[i]th broadheaded pikes. That soe by theise disasters he is not at all fitt eyther for service or worke (his wife beinge w[i]th hym all theise sad tymes) he is deprived of all hopes of liuelyhood from his owne labours for the mayntenance of hymselfe his wife & one childe.

Wherefore yo[u]r petic[i]oner humbly prayeth (his case considered) (and not ordinary) that as the act setts forth yow would be pleas’d to allowe hym such maintenance as his poore condic[i]on requireth, he havinge had noe pay since his vulneratinge beinge the 19th of June last, save onely eleaven shillings conferred upon hym by the States towardes the maintenance of hymselfe his wife and childe but was p[ro]missed to have had constant pay but hathe beene defeated this hys necessary request beinge p[er]formed yo[u]r petic[i]oner will as bound

To the Right Worshipful the Justices of the Peace for the county of Stafford.

The humble petition of George Jennings of Uttoxeter within the said county.

<Shows:> that your petitioner being listed soldier under the command of Captain Snowe, Captain to Colonel Ridgley, and at the taking of this town of Stafford from the enemy then possessing it. He was then sent over into Ireland under the command of Captain William Walker in the regiment of Colonel George Cooke. All which was performed for the service of Parliament, until such time as he was so dangerously wounded that he was unfit for any future service. His wounds and maims were: his skull was cut, a piece of silver put in to supply the breach; his ear slit through, his cheek cut, his jawbone broken, his right arm utterly maimed; his side run through, by which accident his belly grows to it; his thigh run though in 2 several places with broad-headed pikes. That so by these disasters, he is not at all fit either for service or work (his wife being with him all these sad times). He is deprived of all hopes of livelihood from his own labours for the maintenance of himself, his wife and one child.

Wherefore, your petitioner humbly prays (his case considered and not ordinary) that as the act sets forth, you would be pleased to allow him such maintenance as his poor condition requires, he having had no pay since his wounding (being the 19th of June last), save only eleven shillings conferred upon him by the State towards the maintenance of himself, his wife and child; but was promised to have had constant pay but has been defeated in this. His necessary request being performed, your petitioner will, as bound,