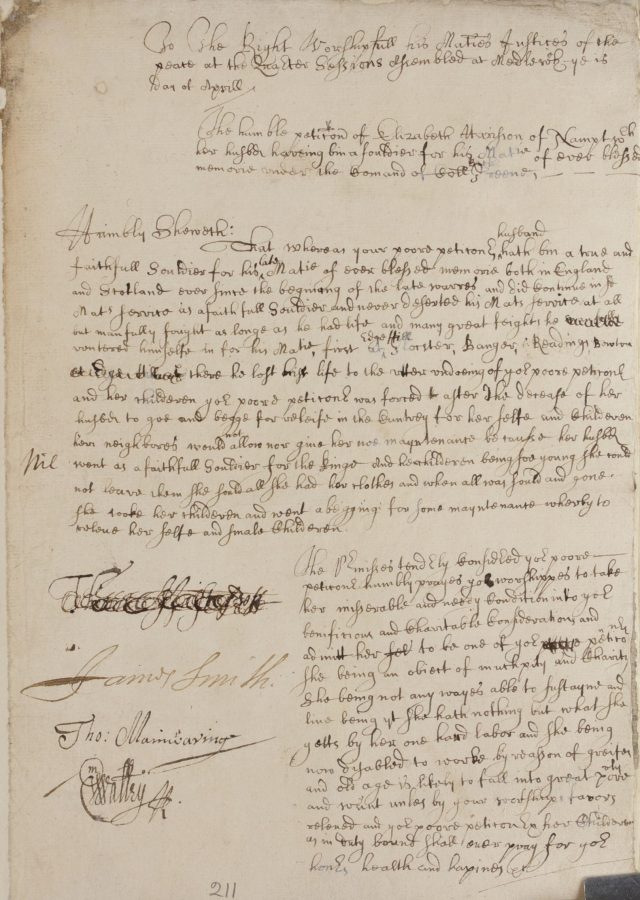 To the Right Worshipfull his Ma[jes]ties Justices of the peace at the Quarter Sessions Asembled at Medlwc[i]ch ye 16 day of Aprill.

That whereas your poore petic[i]on[ers] husband hath bin a true and faithfull Souldier for his late Ma[jes]tie of ever blessed memorie both in England and Scotland ever since the begining of the late warres and did Continue in s[ai]d Ma[jes]t[y]s service as a faithfull Souldier and never deserted his Ma[jes]t[y]s service at all but manfully fought as longe as he had life and many great feights he [illegible] ventered himselfe in for his Ma[jes]tie, first at Edge Hill Glocster, Banger, Readinge, Bowton & Edge Hill there he lost his life to the vtter vndoeing of yo[u]r poore petic[i]on[e]r and her children yo[u]r poore petic[i]on[e]r was forced to after the decease of her husb[an]d to goe and begge for releife in the Cuntrey for her selfe and Childeren her neighbores would not allow nor giue her noe mayntenance because her husb[an]d went as a faithfull Souldier for the kinge And her childeren being soe young she could not leave them she sould all she had her clothes and when all was sould and gone she tooke her childeren and went a begginge for some maynenance wherby to releue her selfe and smale Childeren.

To the Right Worshipful his Majesty’s Justices of the Peace at the Quarter Sessions assembled at Middlewich the 16th day of April.

The humble petition of Elizabeth Harison of Nantwich, her husband having been a soldier for his Majesty of ever blessed memory under the command of Colonel Richard Greene.

That whereas your poor petitioner’s husband had been a true and faithful soldier for his late Majesty of ever blessed memory, both in England and Scotland, ever since the beginning of the late wars and did continue in said Majesty’s service as a faithful soldier and never deserted his Majesty’s service at all, but manfully fought as long as he had life. And at many great fights he [illegible] ventured himself in for his Majesty: first at Edgehill, Gloucester, Bangor, Reading, Bowton and Edgehill – there he lost his life to the utter undoing of your poor petitioner and her children. Your poor petitioner was forced to after the decease of her husband to go and beg for relief in the country for herself and children. Her neighbours would not allow nor give her any maintenance because her husband went as a faithful soldier for the King. And her children being so young, she could not leave them. She sold all she had, her clothes and when all was sold and gone she took her children and went begging for some maintenance whereby to relieve herself and small children.

The premisses tenderly considered, your poor petitioner humbly prays your Worships to take her miserable and needy condition into your beneficious and charitable consideration and admit her sel to be one of your [illegible] pensioners, she being an object of much pity and charity, she being not any way able to sustain and live, being that she has nothing but what she gets by her own hard labour. And she being now disabled to work by reason of griefs and old age, is likely to fall into great poverty and want unless by your Worships’ favour relieved. And your poor petitioner and her children, as in duty bound, shall ever pray for your Honours’ health and happiness etc.