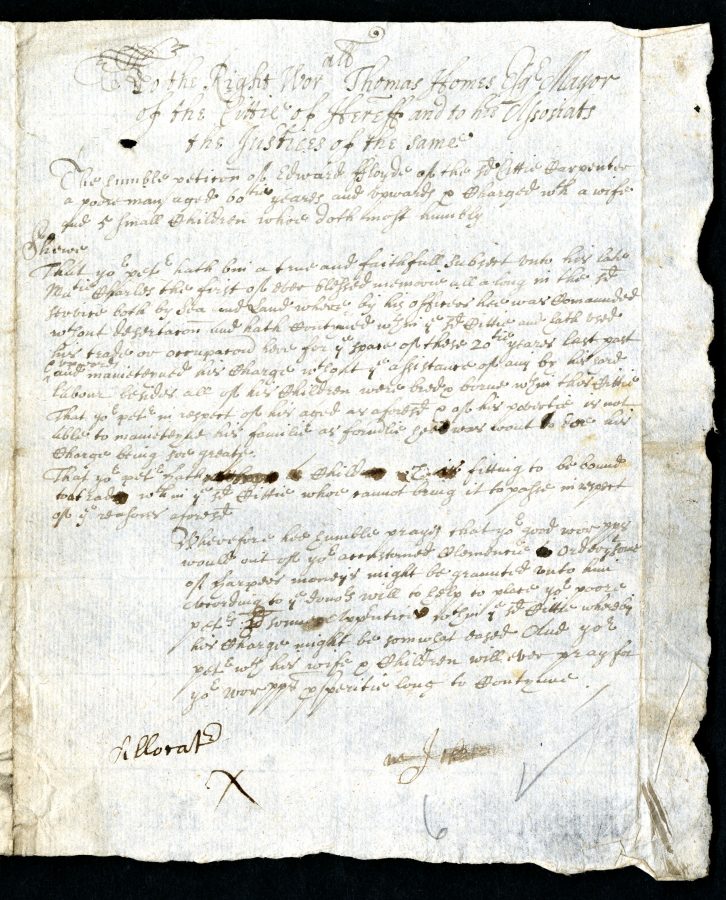 That yo[u]r pet[itione]r in respect of his aged as aforeds[ai]d & of his povertie is not able to maineteyne his familie as formerlie hee was wont to doe his Charge being soe greate.

To the Right Worshipful Thomas Homes Esquire, Mayor of the city of Hereford, and to his associates the Justices of the same.

The humble petition of Edward Floyde of the said city, carpenter, a poor man aged 60 years and upwards, charged with a wife and 5 small children, who does most humbly

That your petitioner has been a true and faithful subject unto his late Majesty Charles the First of ever blessed memory all along in the said service, both by sea and land, where by his officers he was commanded without desertion, and has continued within the said city and has used his trade or occupation here for the space of these 20 years last past and upwards and maintained his charge without the assistance of any by his hard labour, besides all of his children were born and bred within this city.

That your petitioner, in respect of his age as aforedsaid, and of his poverty, is not able to maintain his family as formerly he was wont to do, his charge being so great.

That your petitioner has illegible a child which is fitting to be bound to a trade within the said city, who cannot bring it to pass in respect of the reasons aforesaid.

Wherefore, he humbly prays that your good Worships would out of your accustomed clemency to order that some of Harper’s moneys might be granted unto him, according to the donor’s will, to help to place your poor petitioner’s said son apprentice within the said city, whereby his charge might be somewhat eased. And your petitioner, with his wife and children, will ever pray for your Worships’ prosperity long to continue.