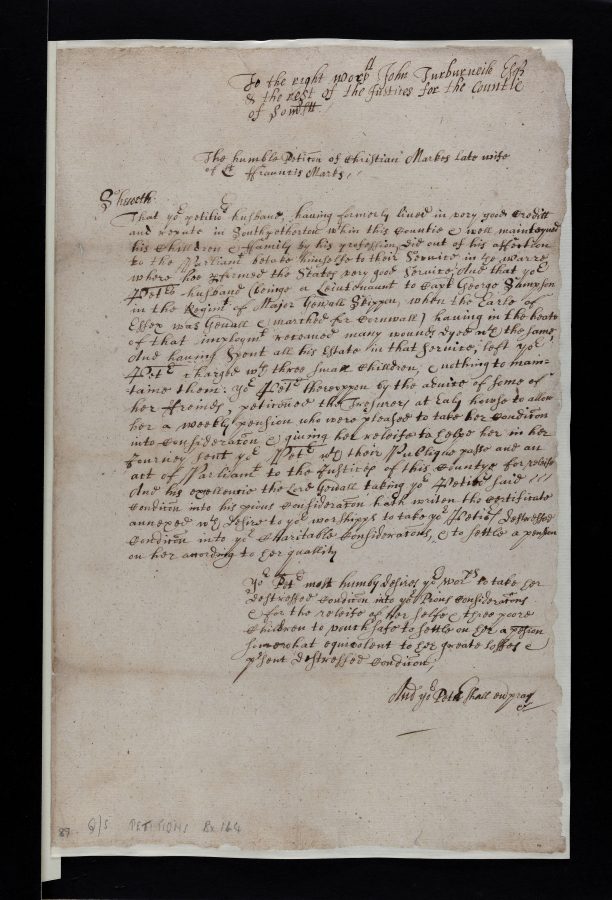 Christian Markes p[e]tition – 4 li. for the present by the Tre[asure]r

To the Right Worshipful John Turburveile Esquire and the rest of the Justices for the county of Somerset.

That your petitioner’s husband, having formerly lived in very good credit and repute in South Petherton within this county and well maintained his children and family by his profession, did out of his affection to the parliament take himself to their service in the war, where he performed the State very good service. And that your petitioner’s husband (being a Lieutenant to Captain George Sampson in the regiment of Major-General Skippon, when the Earl of Essex was General and marched for Cornwall) having in the heat of that employment received many wounds, died with the same. And having spent all his estate in that service, left your petitioner charged with three small children and nothing to maintain them. Your petitioner thereupon, by the advice of some of her friends, petitioned the Treasurers at Ely House to allow her a weekly pension, who were pleased to take her condition into consideration; and giving her relief to help her in her journey, sent your petitioner with their public pass and an Act of Parliament to the Justices of this county for relief. And his Excellency the Lord General taking your petitioner’s said condition into his pious consideration, has written the certificate annexed with desire to your Worships to take your petitioner’s distressed condition into your charitable considerations and to settle a pension on her according to her quality.

Your petitioner most humbly desires your Worships to take her distressed condition into your pious consideration and for the relief of herself and three poor children, to vouchsafe to settle on her a pension somewhat equivalent to her great losses and present distressed condition.

Christian Markes’s petition – £4 for the present by the Treasurer.