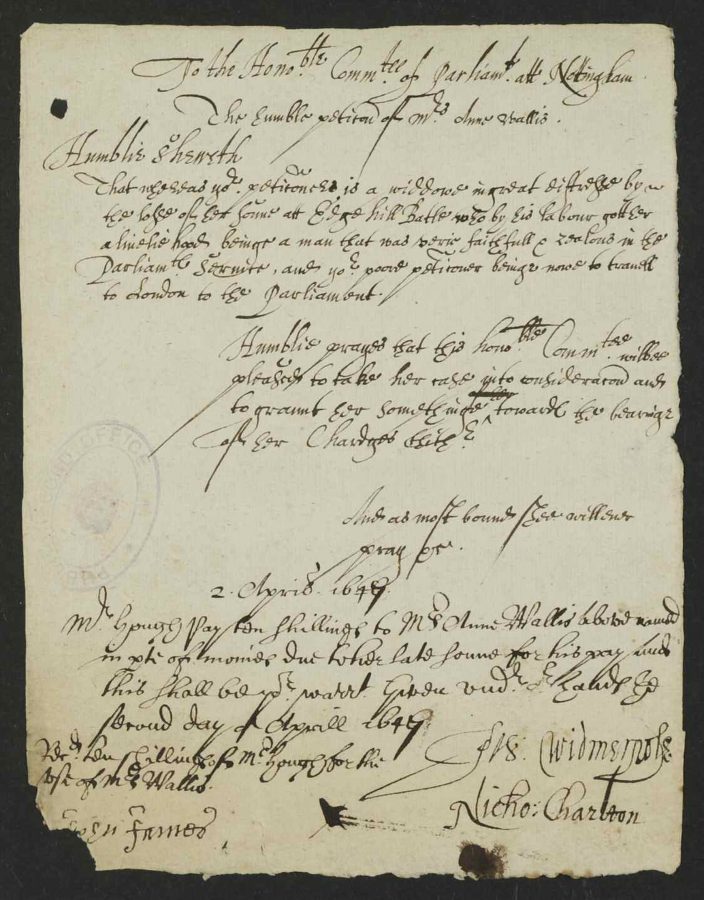 That whereas yo[u]r petic[i]oner is a widdowe in great distresse by the losse of her Sonne at Edge hill Battle who by his labour gott her a liueliehood beinge a man that was verie faithfull & zealous in the Parliam[en]ts Service, and yo[u]r poore petic[i]oner beinge nowe to trauell to London to the Parliament.

And as most bound shee will euer pray &c.

Mr Hough Pay ten shillings to Mrs Anne Wallis above named in p[ar]te of monies due to her late sonne for his pay and this shall be yo[u]r war[ran]t. Given vnd[e]r o[u]r hands the second day of Aprill 1647.

That whereas your petitioner is a widow in great distress by the loss of her son at Edgehill battle, who by his labour got her a livelihood, being a man that was very faithful and zealous in the parliament’s service, and your poor petitioner being now to travel to London to the parliament.

Humbly prays that this Honourable Committee will be pleased to take her case into consideration and to grant her something of her towards the bearing of her charges thither.

And, as most bound, she will ever pray etc.

Mr Hough, pay ten shillings to Mrs Anne Wallis above named in payment of monies due to her late son for his pay, and this shall be your warrant. Given under our hands, the second day of April 1647.

Received ten shillings of Mr Hough for use of Mrs Wallis.