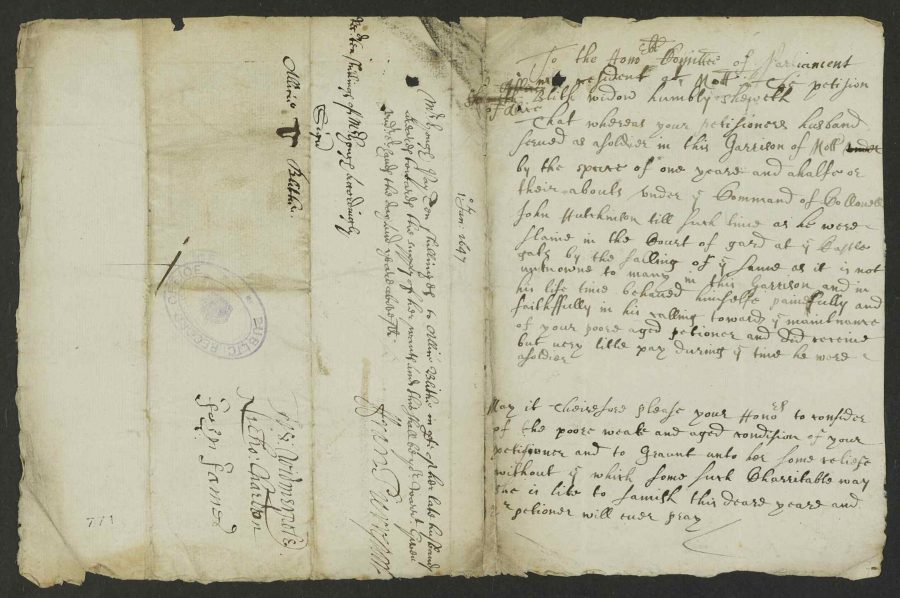 May it theirefore please your Hon[ou]rs to consider of the poore weake and aged condision of your petisioner and to graunt unto her some reliefe without ye which some such Charritable way she is like to famish this deare yeare and y[ou]r petioner will euer pray.

To the Honourable Committee of Parliament now resident at Nottingham, the petition Alilice Sheweth of Alice Blith, widow, humbly shows:

That whereas your petitioner’s husband served as a soldier in this garrison of Nottingham under by the space of one year and a half or thereabouts under the command of Colonel John Hutchinson, till such time as he was slain in the court of guard at the castle gates by the falling of the same, as it is not unknown to many in this garrison; and in his lifetime, behaved himself painfully and faithfully in his calling towards the maintenance of your poor aged petitioner and did receive but very little pay during the time he was a soldier.

May it therefore please your Honours, to consider of the poor, weak, and aged condition of your petitioner and grant unto her some relief, without the which some such charitable way she is likely to famish this dear year. And your petitioner will ever pray.

<Mr Hough, pay ten shillings to Allice Blithe in part of her late husband’s arrears towards the supply of her wants, and this shall be your warrant. Given under our hands the day and year abovesaid.>