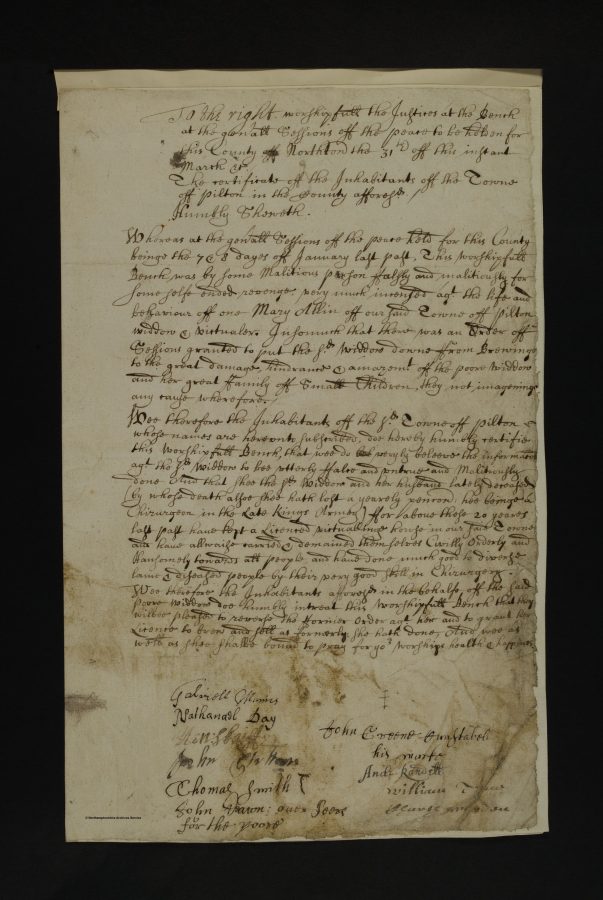 To the right worshipfull the Justices at the Bench at the gen[er]all Sessions off the peace to be holden for this County of North[amp]ton[shire] the 31th off this instant March &c.

The certificate off the Inhabitants off the Towne of Pilton in the County afores[ai]d.

Whereas at the gen[er]all Sessions off the peace held for this County being the 7 & 8 dayes of January last past, This worshipfull Bench was by some Malitious person Falsly and malitiously for some selfe ended revenge, very much incensed ag[ains]t the life and behaviour off one Mary Allin off our said Towne off Pilton widdow & victualer. Insomuch that there was an Order off Sessions granted to put the s[ai]d Widdow downe From Brewinge, to the great damage, hindrance & amazem[en]t off the poore widdow and her great family off Small Children, they not imagininge any cause wherefore.

Wee therefore the Inhabitants off the s[ai]d Towne off Pilton whose names are herevnto subscribed, doe hereby humbly certifie this worshipfull Bench, that wee do bel veryly beleeve the informac[i]on ag[ains]t the s[ai]d Widdow to bee vtterly False and vntrue and Malitiously done And that shee the s[ai]d Widdow and her husband lately deceased (by whose death alsoe shee hath lost a yearely penc[i]on: hee beinge a Chirurgeon in the Late Kings Armey) For aboue these 20 yeares last past haue kept a Licenced victuallinge howse in our said Towne and haue allwaise carried & demained themselves Civilly Orderly and Hansomely towards all people, and haue done much good to diverse lame & diseased people by their very good skill in Chirurgery.

Wee therefore the Inhabitants affores[ai]d in the behalfe off the said poore Widdow doe humbly intreat this Worshipfull Bench that they wil bee pleased to reverse the Former Order ag[ains]t her, and to grant her Licence to brew and sell as formerly she hath done, And wee as well as shee shal be bound to pray for yo[u]r worships health & happiness.

To the Right Worshipful the Justices at the Bench at the General Sessions of the Peace to be held for this county of Northamptonshire the 31st of this instant March etc.

The certificate of the inhabitants of the town of Pilton in the county aforesaid.

Whereas at the General Sessions of the Peace held for this county, being the 7 and 8 days of January last past, this Worshipful Bench was by some malicious person falsely and maliciously for some self-ended revenge very much incensed against the life and behaviour of one Mary Allin of our said town of Pilton, widow and victualler. Insomuch, that there was an order of Sessions granted to put the said widow down from brewing to the great damage, hindrance and amazement of the poor widow and her great family of small children, they not imagining any cause wherefore.

We therefore, the inhabitants of the said town of Pilton whose names are hereunto subscribed, do hereby humbly certify this Worshipful Bench that we do bel verily believe the information against the said widow to be utterly false and untrue and maliciously done. And that she the said widow and her husband lately deceased (by whose death also she has lost a yearly pension, he being a surgeon in the late king’s army) for above these 20 years last past have kept a licenced victualling house in our said town and have always carried and demeaned themselves civilly, orderly and handsomely towards all people, and have done much good to diverse lame and diseased people by their very good skill in surgery.

We therefore, the inhabitants aforesaid, in the behalf of the said poor widow do humbly intreat this Worshipful Bench that they will be pleased to reverse the former order against her, and to grant her licence to brew and sell as formerly she has done. And we as well as she shall be bound to pray for your Worships’ health and happiness.

John Deacon, Overseer for the Poor